“Worthy are you, our Lord and God, to receive glory and honor and power, for you created all things, and by your will they existed and were created.” – Rev 4:11 ESV 1

Thou art worthy, O Lord, to receive glory honour, and power, The Alexandrian copy, and some others, the Complutensian edition, the Vulgate Latin version, and all the Oriental ones, read, “thou art worthy, O Lord, and our God, to receive”; that is, to receive the acknowledgment and ascription of glory, honour, and power; for otherwise God cannot be said to receive these from his creatures, than by their confessing and declaring that they belong unto him: and that for the reasons following,

for thou hast created all things; the whole universe, the heavens, the earth, and sea, and all that in them are:

and for thy pleasure they are and were created; God is the first cause, and the last end of all things; by his power they are made, and according to his will, and for his own glory, and therefore is worthy of such a doxology; see Prov 16:4. What is here said is contrary to a notion imbibed by the Jews, that the world was not created but for the sake of the Israelites: and elsewhere they say, “the world was not created but for David; and one says for Moses; and Rabbi Jochanan says for the Messiah;” which last is truest. [Gill]

And all the inhabitants of the earth are reputed as nothing, That is, by the most high God, in comparison of him; and that not only the common people, but magistrates, princes, and kings, and even so great a monarch as Nebuchadnezzar; they are like mere nonentities, nothing as to existence, substance, greatness, glory, and duration, when compared with him: for this is to be understood not absolutely as in themselves; for as such they are something; their bodies are something in their original, and especially in their make, form, and constitution, and even in their dissolution; and their souls are yet more valuable, are of more worth than the whole world, being immaterial and immortal; but comparatively with respect to God, in whom they live, and move, and have that being they have, and by whom they are supported in it; al whose glory and grandeur is fading and passing away, and continuance is but very short; and all nothing with God, the Being of beings, whose glory is inconceivable, and with whom a thousand years are as one day, and who is from everlasting to everlasting: and this meant chiefly of the rational inhabitants of the earth; not of the beasts of the field, the cattle on a thousand hills, and the innumerable reptiles of the earth, which also are the inhabitants of it; but of men, the principal ones, and of all of these, high and low, rich and poor, bond and free; not as in their own account, and that of others; for they are something in their own esteem, and seem so in the eyes of others, who judge according to the outward appearance; but they are nothing in the account of God: and as this is true of them in things natural and civil, it is much more so in things spiritual, or relating to everlasting salvation: in these men are nothing, and counted as nothing; no use is made of them, or any account is had of anything done by them; these have no causal influence in their salvation; they are nothing in God’s choice of them to eternal life, which is all of mere sovereign grace; nothing in redemption, which is only by Jesus Christ; nothing in regeneration, which is alone by the Spirit and grace of God; nothing in justification, which is not by the works of the law, but by the righteousness of Christ; in short, they are nothing in their salvation from first to last, which is all of grace, and not of works. Jarchi and Saadiah interpret this of an atom or mote in a sunbeam, which is seen flying about, but cannot be laid hold on, having no substance, and disappears when the sun shines not; see Isa 40:15.

And he doeth according to his will in the army of heaven, and among the inhabitants of the earth; he orders the angels, which are the host of heaven, to stand or go where he pleases; and he disposes of men on earth, and puts them into such stations, and such conditions and circumstances, and appoints them such business and services, as he thinks meet. The angels are “the army of heaven”, or the heavenly host; so called for their number, there being legions of them, even an innumerable company; and for their military use, being employed to fight for the people of God, to encamp about them, and protect them: those who formerly belonged to them, that sinned against God, he cast them down to hell, without showing them any mercy; and the rest he chose and confirmed in Christ, and all according to his sovereign will; and these he makes use of according to his pleasure, to minister to the heirs of salvation in life, to convoy their souls to heaven at death, and to gather in all the elect at the last day. The “inhabitants of the earth” are the men of it, as before, with whom he does as he pleases in things temporal and civil, making some rich, and others poor; raising some to great honour and dignity, while others live in meanness, poverty, and disgrace: and in things spiritual; he loves whom he will; he chooses whom he pleases; he redeems whom he wishes from among men; he regenerates and calls by his grace, of his own will; and reveals Christ, and the great things of the Gospel, to whom it seems good in his sight; he does what he will with his own; he bestows grace and glory on whomsoever be pleases, as free grace gifts, without any merit of the creature, according to his sovereign will and pleasure.

And none can stay his hand: stop his power, resist his will, or hinder him from acting, or cause him to cease from his work, which he is bent upon; his will in both worlds is sovereign and arbitrary, and his power uncontrollable. It was so in creation, he said, and it was done; it is so in providence, he does what he pleases; there is nothing done without his knowledge and will, and there is no counsel against the Lord: it is so in his works of grace; in the great work of redemption; no difficulties could discourage or hinder Christ from the performance of that arduous work, he being the mighty God: and in the work of grace upon the heart of a sinner, when God begins to work, none can let; not corruptions within, nor Satan without; nor can anything hinder the carrying of it on; not indwelling sin, nor the snares of the world, nor the temptations of Satan. The purposes of God cannot be disannulled; his hand cannot be held, stopped, or turned back from the execution of them; he will do his will and his work in the world, and in his churches, and on particular persons, maugre all the opposition of men and devils.

Or say unto him, what dost thou? what is this thou hast done? and wherefore hast thou done it? why was it not done in another form and manner, and for other ends and purposes? see Isa 45:9, all such like questions are vain and foolish, and are despised by the Lord; he gives no account of his matters unto the children of men. Some may with wonder say, “what has God wrought!” but none ought to say, in a complaining and murmuring way, “what dost thou?” and should they, it is of no avail, he will do what he pleases. [Gill]

Answer – God executeth His decrees in the works of creation and providence. 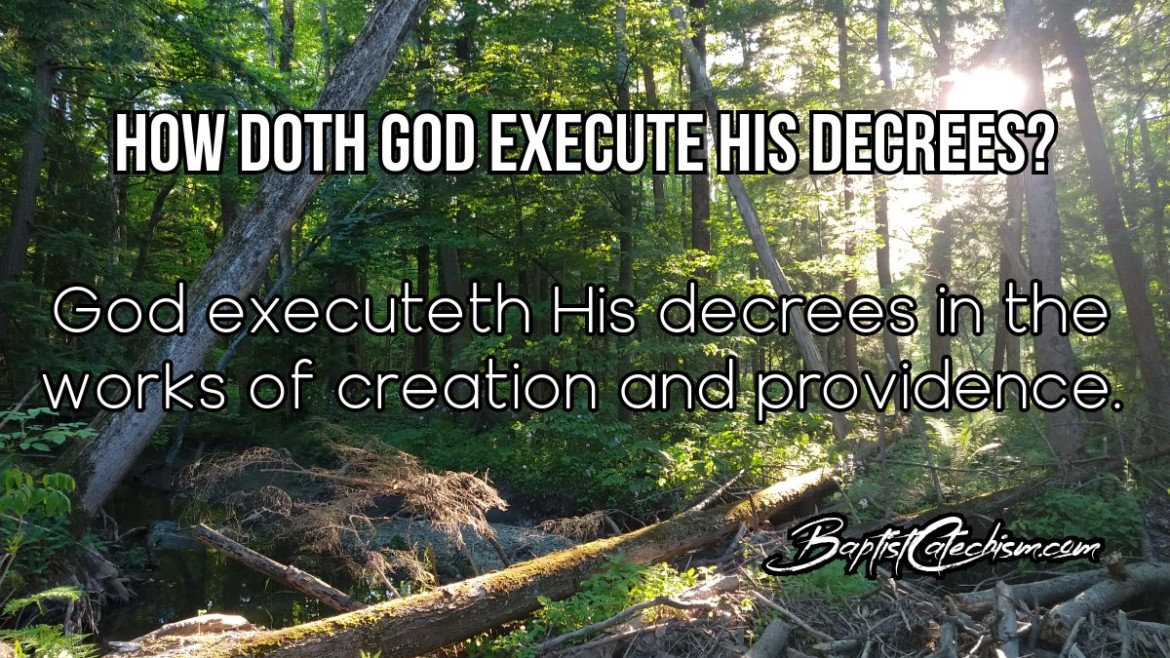 1 Editor’s note: The catechism source (see works cited) used for this project listed no Scripture references. Editor has chosen to use Scripture citations listed in Charles Spurgeon’s catechism from the Chapel Library (Question 8).

Photo by Amanda Phung on Unsplash