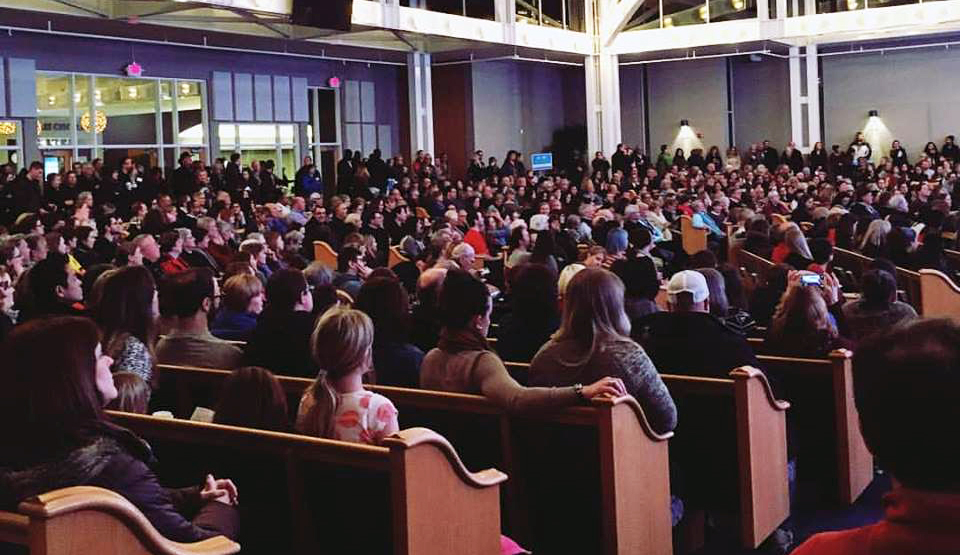 Please Note: The views expressed here are those of the author and do not necessarily represent or reflect the views of all connected with Theology Mix.

“Well, when we planned this event earlier this week we thought we’d have about forty people and we could hold it in our offices.”

The World Relief spokesperson looked out at the crowd of an estimated 800-1000 people.

“I guess we were wrong.”

I’ve rarely been as proud to be a Jesus follower as I was last night. In response to last week’s executive order halting the refugee program for four months and the Syrian refugee program indefinitely, God’s people stood up.

For some of us, we stood up because there was nowhere to sit. The megachurch pews were packed out, people lined the walls two deep, and it was probably a good thing no fire marshals were present. At the end of the evening, when staff workers asked refugees among us to raise their hands, everyone stood in a show of solidarity and respect. Refugees received a standing ovation.

I have to admit, I cried. It’s been lonely lately, fighting for the least of these among us, the ones Jesus told us were a stand in for him in this world. It’s been a turbid sea of misinformation, deliberate lies, and anger. So much anger.

So to see that there are so many ready to stand and fight that same fight was overwhelming. I know not all showed up in support. Some needed more information. Some were curious and/or concerned, wondering if their security was threatened. But clearly, hundreds of people had only one questions—what can we do to help?

If you belong to the group who wants to help or the group who questions why, you are a welcome and needed part of the conversation. None of this can be talked about from only one side. So as a World Relief volunteer (not as an authorized spokesperson) I’d love to have that conversation.

First, there are the usual questions.

Isn’t it good to have a secure vetting process? Isn’t that what this is all about?

Yes, it is good. It is imperative. No one is safe without a good vetting process for refugees, us or them. However, the process is good. It is tight. it takes almost two years (and that does not count the many years some people wait in refugee camps before their process begins.) You can get a brief overview of what happens in this process here.

A terrorist hoping to get through as a refugee would have to travel to a refugee camp, prove his refugee status before being allowed to stay, wait for years until allowed to apply to the UN, hope to be among the less than one half of one percent admitted to the US, go through a two-year process of interviews and biometric and medical exams, and get past Homeland Security. Good luck with that. Student and tourist visas are so much faster.

Since the Refugee Act of 1980 set up systematic procedures for admittance, there has been not one refugee implicated in a major attack in the US. Not one person has died. We have resettled over three million refugees and not one has killed anyone in a terrorist act. That’s a pretty good record. Surely a system working that well, even if it needs scrutiny, did not need a total shut down while that scrutiny was being accomplished.

According to the CATO Institute, “ The chance of an American being murdered in a terrorist attack caused by a refugee is 1 in 3.64 billion per year.” That is one person among half the world’s population.

Meanwhile, the chances of dying or watching one of your loved ones die in, say, Aleppo, is approximately 100 percent. I’ll let you do the moral math on that one.

Why don’t we take care of our own first?

We should take care of our own. We should take care of anyone in need. Americans have the means to do so—we just don’t have the will. This is not an either-or question nor a zero-sum game. We are not required to choose. I can care for anyone and everyone. I am wondering, however, of all the people I’ve seen post that meme about “I wish you cared as much about homeless veterans as you do refugees,” what exactly each of those people are actively doing for homeless vets themselves. I wonder.

Because we have the means for both. We do not have the will.

What does the Bible really say?

When the Israelites were exiled from their land, God laid two charged against them. They committed idolatry and they refused justice to the oppressed. The prophets recite the realities over and over—God will judge those who do not remember that they were once or, easily could be, those needing welcome, kindness, and respect.

To deny this as an overarching theme of Scripture is to be reading a very different Bible than the one I studied in seminary.

What can I do to help?

Good question! Resettlement agencies will face a huge shortfall of funding with this EO. They will be forced to shut down some operations and lay off staff that are currently serving refugees that have come in the last several years. So first, donate to the organization of your choice. They need it desperately.

Second, let your congresspeople know how you feel. Call. Email. Write. Keep watch over the situation.

Advocate. Educate yourself on the facts and then tell people. Nicely. Gently. Like Jesus would. Not the Jesus who took a whip to the temple (because we are not Jesus and not really authorized to do that) but the Jesus who used words to heal, reconcile, and educate. Fruit of the Spirit, people.

Volunteer. I’ve had the privilege of bringing refugees from the airport to their new home. It’s a joy-filled trip! I’ve also had the joy of purchasing the things they will need to start a new life and setting up an apartment to welcome families home. Families need “friendship partners’ to come alongside the and help them learn the ways of this confusing culture. They need volunteers to teach them English and help them navigate the citizenship process. They need advocates in churches. The list is long. I’m excited to be finishing my training as an ESL instructor. It isn’t hard, and it doesn’t take long. I put it off for years, sure that I didn’t have the time, or the personality, for this work. Until God kicked me and reminded me that those are very first world worries in a world where people have lost their children, spouses, countries, and homes.

Is it scary? Yes. I am an introvert among introverts, and talking to strangers, especially strangers who don’t speak my language, is so far out of my comfort zone. But seriously, how far are they out of all that has ever been comfortable?