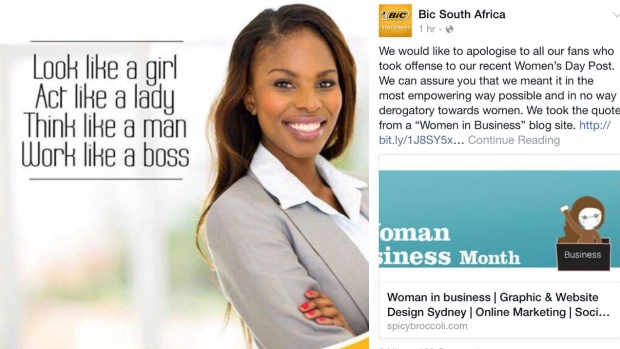 It’s Time for Christian Women to Lean In

The score was Women 1 – BIC 0. But, let’s face it, we women are not nearly as brave in the corporate environment as we are on Twitter.

As Sheryl Sandberg, chief operating officer of Facebook, says, we unintentionally hold ourselves back in our careers. We keep ourselves from advancing because we lack self-confidence. We lower our own expectations of what we can achieve.

I’m convinced that within Church—from the evangelical to the high and hazy—we fail ourselves in much the same way. Why do we, the backbone of any denomination, allow our preachers to present the women in the Bible the way they do? Why do women, mothers, teachers, and church leadership perpetuate the bad branding?

Perhaps I notice it more because I am not a child of the church. In my family we discussed politics, economics, and books. Religion was not an issue. I happened to touch sides with church because my mother sent me to a convent boarding school—the less expensive version of a private school in South Africa. Once school was done and dusted so was church. It was only when I turned 50 and the clock of life began ticking louder that I decided to take out a heavenly insurance policy.

I was a divorcee so Catholicism didn’t seem an option. My mother used to lay claim to Anglicanism in the state census because it sounded posh. Moreover, I’d been confirmed in the Anglican Church because it meant I could escape school on Sunday mornings. So that’s where I ended up.

That I am a priest today is nothing short of a miracle. But I am horrified that the first woman bishop in Southern Africa was only installed in November 2012—i.e., 18 years after the church had decided women could be consecrated. I cringe at the breathless excitement surrounding Britain’s recent decision to allow women bishops. (We won’t mention our cousins in Rome.) And I’m amazed that even my evangelical sisters, ostensibly freed of our chauvinist traditions, still subscribe to the patriarchal view of women.

The Bible is central to Christian being. Yet we are careless with its content. Too often we read it through the prism of incorrect assumptions passed down for generations. We do so as if women are secondary to God’s plan.

Yet Jesus broke the mould when he allowed the woman at the well to be an apostle to her village. He encouraged Mary to sit at his feet and learn. He allowed Mary Magdalene, among other women, to finance his ministry (Luke 8-2). Women were the main witnesses of his crucifixion and his resurrection.

Notably Paul, the grumpy chauvinist, has only the highest praise for Junia, who with Andronicus “is outstanding among the apostles” (Roman 16:7).

We fail Him by allowing the mould He broke to be glued back into its original chauvinist form. Too often we disobey the Christ who instructed us to love ourselves.

One of my favourite tricks, especially when I am a guest preacher, is to ask what Mary Magdalene did before she met Jesus. The congregation is usually hesitant to shout out “prostitute” in the house of the Lord but the polite whispers invariably reach the pulpit. I then offer to give my car to anyone who can prove this.

Did you know that Mary Magdalene is considered to be a saint by the Catholic, Orthodox, Anglican, and Lutheran churches? Her official feast day is July 22.

S0 why are we still allowing Church to mis-brand our biblical women as temptresses, prostitutes and—at the other end of the scale—saints. Where are the feisty role models for our daughters and granddaughters? The women leaders in the Early Church, the female disciples who helped men with the often dangerous work of carrying Christianity to the world?

I know the rib story is romantic but how often do our kids get the Genesis 1:27 version read to them? “God created human beings in his own image, in the image of God he created them; male and female he created them.”

Why do we feel uncomfortable when God, in whose image we are made, is referred to as “She”? Maybe the Jewish idea of not using gender references for God is wise. It would make it so much easier for women to believe, down in the depths of our souls, that we too are made in the image of our Creator.

I tend to rant about Mary Magdalene, but Jesus’ mother also gets a raw deal. Do you really think that Mary was a doe-eyed, gentle soul with a pale veil and an electric light behind her head?

Pulleez! She was a teenager who raised her kids among villagers who would have called her first child a bastard. All this at a time when family honour was everything. Later we get a glimpse of the Yiddishe mama at the wedding of Cana. As in “Boychick you will make wine.”

She’s there for her boy throughout the crucifixion and then mothers his disciples. Dare I suggest that she played a meaningful role in the Early Church, along with other women so often overlooked? Still in her late forties was she really a frail lady for a very young John to look after? Or was Jesus doing what we all do to young boys when we tell them “now you are the man of the house”?

In short, we women should be insulted when our biblical sisters are misrepresented and ignored.

I have purposely refrained from resorting to exegesis—looking into the context of scriptural texts, the agenda, the audience—because even if we only read the Bible literally there’s room for a BIC revolution.

You don’t have to be a systematic theologian to stop and wonder about the courage needed for a young Miriam to attract the attention of an Egyptian Princess. Clearly a high achiever, she gets the royal woman to “adopt” her baby brother and she clinches the job of wet nurse for her mother. My Jewish friends call it chutzpah. I call it something to be taught in Sunday School with emphasis on Miriam’s role.

So your daughter wants to study Law? Tell her about Judith, the warrior, judge, and prophetess. Your son’s wife is a pain and ditto for your mother-in-law? Look to Naomi and Ruth for hope. And consider their story carefully. Look past the sentimental version and you could make a chick movie about those two.

In short, don’t sugar coat the biblical women. Honour them by keeping them real.

Perhaps the trick is to always remember not to confuse Church with God. Look in the mirror every morning and say, “I am made in the image of God.” Then lean in.