Our church is in a dilemma. Half of the people want to uproot and become a mobile church again (we started that way six years ago), meeting in a school to save money. (Money, not surprisingly, is a big issue right now.) Half of us want to buy the property we currently rent, to save money as well, and to put down roots rather than take them up. Another half (yes, that’s one and a half; we are not all sure of ourselves at the best of times) wants something, somewhere, but we don’t know what.

And so far, directional clarity has not been forthcoming. 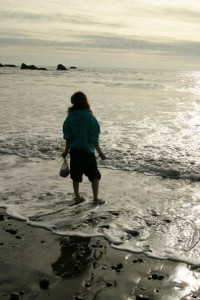 Still, every week my oldest daughter and I do something that could be considered strange under those circumstances. We come to the church building and organize. We put things in plastic boxes (I have a bit of a plastic box obsession), label them, toss junk, and generally create some order in a place where, just like home, things have been randomly torpedoed anywhere and everywhere after use. When people want to find things, we, at least, will know where they are. (And I am quickly becoming one of those church ladies who gives you the stink eye if you don’t put something back where it came from. This has been a lot of work, people.)

But what is the point if we’re going to pack up and leave? Why make sense of the place we’re in if it’s not our place to stay? I’ve made peace with it, theologically. It’s because of something I heard preached not long ago, and something that swirls around in my head often.

“This is what the Lord of Heaven’s Armies, the God of Israel, says to all the captives he has exiled to Babylon from Jerusalem: “Build homes, and plan to stay. Plant gardens, and eat the food they produce. Marry and have children. Then find spouses for them so that you may have many grandchildren. Multiply! Do not dwindle away! And work for the peace and prosperity of the city where I sent you into exile. Pray to the Lord for it, for its welfare will determine your welfare” (Jeremiah 29:4-7).

Consider wherever you are home. That it is not permanent is no reason not to unpack.

I listened to this Switchfoot song not long ago, and I pondered this idea of unpacking.

We live in a tension between the now and the not yet. Now is what we see and feel and know. Not yet is the world God has promised, the reconciliation of all things broken by the Fall, the regeneration of a Garden that held all perfection. Jesus awakened us to this promise, also promising that the Kingdom was here now, seeable and knowable, but not complete. It is not yet, but yet it is.

We cannot grasp this paradox.

But still, we must live in it. And we must not live as those who refuse to unpack and organize. With Jeremiah and his kin, we have to learn to put down our roots, plant our crops, and seek the welfare of our world. In a manner only God can orchestrate, perhaps that is precisely the way the Kingdom will show itself in the now.

I tried not to unpack when we moved to Chicagoland. The plan was to be here for a year and then to move on. To just about anywhere else. I hated it, and I intended to follow through on that plan.

Should I mention now that we’ve been here almost twenty years? It’s not where I want to be forever, but can you imagine if I was still living unpacked? Can you picture the strangeness if I had decided not to leave my house, not to make friends, not to become attached to anything because I was leaving soon? I read about Mrs. Havisham in 9th grade. (Great Expectations, Charles Dickens. Sorry if you didn’t have the pleasure/torture.) I do not want that level of weird.

Yet that is what so many Christians do. This world is not our home. In fact, this world is a downright scary place out to get us. At least, that’s the narrative playing on many an evangelical playlist. We circle the wagons and pull in, fearing the city we live in rather than seeking its welfare. We grow cobwebs around our souls Mrs. Havisham would envy.

But what if going into the city (town, farmland, foreign country, fill in the blank) around us is the only way God ever planned for His Kingdom to come here and now? What if we are Plan A, and there is no Plan B? And what if we sit in our homes (churches) protecting ourselves, waiting for the signal that it’s time to go, and that kingdom is still crying to be realized? What if we’re missing a LOT of chances to see His power displayed here and now because we’re so afraid to go out in its strength and see what happens?

Seek the welfare of the city you are in. That means learning about it. Finding out who lives there, what they dream of, what they need, how they think. Seeking welfare implies finding the brokenness around us and joining people to heal it. It is people who go out their doors to do what Jesus did—heal, feed, teach, forgive, love.

I want to live like the later verse of the same song.

On the final day I die
I want to hold my head up high
I want to tell You that I tried
To live it like a song.

I want to be able to say I unpacked. I stayed. I did all I could to organize and make sense of the place I was put in so that others could find what they needed. I made it my home and made my home a better place. Not because I don’t know there is something better coming. Rather, because I do. I know about that place where the righteous right the wrongs. I know how unspeakably beautiful it will be. Well, I don’t know. I can’t know. But I can imagine.

While we will always live in the God-given tension of longing for home, we are also already there. I don’t understand this. But I know what to do when I’m at home. I unpack and get to work.