The release of Tim Hiller’s new book Strive was October 1, 2015!

Then he said to them all: “Whoever wants to be my disciple must deny themselves and take up their cross daily and follow me. For whoever wants to save their life will lose it, but whoever loses their life for me will save it.

During my second year as a head football coach we began a new practice: we waited to vote for team captains until we had a week of practice under our belts. Why? We wanted to answer a key question:

Who wants to lead the most?

After selecting our captains during that second week of practice, I always held a meeting with our appointed leaders to outline the six pillars of being a captain in our program:

Up until this point in the conversation, the room was always filled with lots of smiles and head nods…until we reviewed the sixth and final pillar. Sacrifice.

Sacrifice: Captains are servant leaders—they serve others around them while they lead, even if it is inconvenient.

As our young men looked up at me with inquisitive looks, I asked them to read aloud the following two bullet points, outlining what sacrifice tangibly looked like in our program on a daily basis:

LOVE is spelled T-I-M-E.  Even when it is a hassle, you have to be willing to show your teammates you care and will do whatever it takes for them. The best ability is availability.

Captains in our program serve their teammates. This goes beyond encouraging words….our captains carry the ball bags, equipment, and water each day. Our captains listen to teammates’ problems. Our captains go above and beyond for the brotherhood.

Up until that point in my life, every football program I’d ever been a part of was about seniority, not service. Sophomores carried the water and equipment, seniors ordered them around. A coming of age meant more bossing around and less busy work. Admittedly, I ran my program this way my first season as a coach. It was what I had always been accustomed to. But then it dawned on me during my first off-season—I was training our senior captains to be served, not to serve. The exact opposite of true leadership.

As a coach, the sixth pillar of sacrificial service showed who really wanted to be a captain and who just liked the idea of it. A life of meaning is about sacrificing for the good of others. We all have things we want. Things we are striving for and pursuing. But we find out just how badly we want the object of our pursuit when it comes time to give something up for it.

I believe a relationship with Jesus Christ is the most important thing we can pursue—in this life and the life to come—but, just like my young captains, it requires “want to.” And then it requires sacrifice. In Luke 9, Jesus walks us through the cost of living sacrificially for him.

Yes, the price of following Jesus is high, but the price Jesus paid on our behalf is higher. His sacrifice was the ultimate one—losing his life—so that you and I can keep ours eternally in his Heavenly presence. Is he your desire? Are you willing to deny and discipline yourself to do his will? This week let’s work to sacrifice for the good of others and for God’s glory as we pursue a deeper relationship with his son Jesus!

The Strive Challenge™ by Tim Hiller 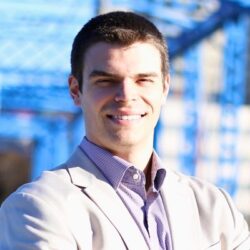 Tim Hiller
From his earliest days, Tim Hiller’s story consisted of three things: A boy, a ball, and a dream. The boy with a ball began chasing his dream by dodging imaginary defenders in his parents’ backyard and cutting out pictures from Sports Illustrated for Kids magazine. The pursuit of his dream continued through the ranks and record books of the Orrville High School and Western Michigan University football programs, where Tim re-wrote the standards in virtually every major passing category. And his dream culminated in the National Football League, where Tim spent time with four teams, primarily the Indianapolis Colts.

Today, Tim is the author of the book Strive, a nationally recognized speaker, and the co-founder of Next Level Performance, which builds leadership and character in student-athletes through the sports they play. Tim and his wife Michelle and son Daniel reside in Kalamazoo, Michigan.

To learn more about Tim and his work, visit timhiller.com or follow him at @timhiller3.