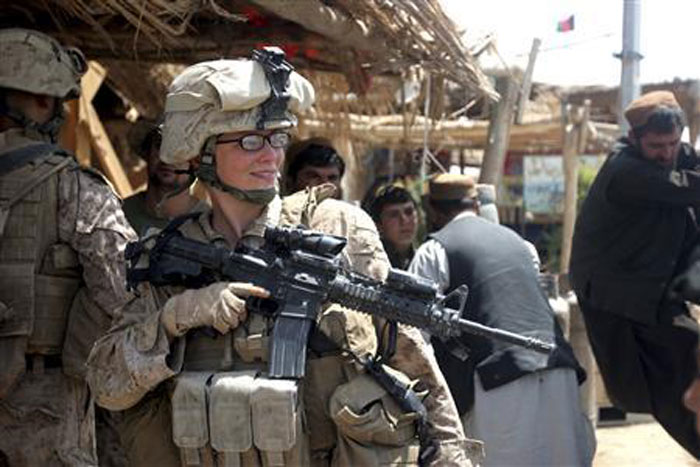 Should Women Be Required to Register for the Draft?

In the New Hampshire GOP debate a question was raised regarding women in the military. The moderator asked, in light of the fact that all bans have been lifted for women in combat, should women be required to register with selective services in case the draft is reinstituted? Marco Rubio was the first to field the question and he pointed out that he had no problem with women serving in combat (voluntarily) as long as the minimum requirements were not compromised. Ultimately, Rubio had no problem with women being required to register for selective services if a draft was ever instituted.

The moderator then turned to Governor Jeb Bush and reiterated the question as, “Should women be required to sign up for selective services?” Bush echoed the sentiment of Rubio that as long as women can meet minimum standards, then they should be allowed to serve. It’s important, at this point to note that both Rubio and Bush shifted from “required” to “allowed.”

Finally, Chris Christie jumped in to note that he and his wife have raised their two daughters to know that their self-worth comes from within. He went on to say that we as a nation should not discriminate against women who want to stand up and fight for their country. He then applied that to selective services saying women should be allowed to register as well.

In fact, when pressed further on the “requirement” aspect Jeb Bush found himself stammering around incomprehensibly. The moderator asked, “What would you say to parents with young girls who might be concerned that the draft might be reinstituted?” Jeb responded, “The draft isn’t going to be reinstituted.” To which the moderator rightly asked, “Are you going to do away with it?” Jeb quickly, nervously, responded, “No, No I didn’t say that.”

Every one of these three candidates not only showed their support of women voluntarily joining the military for combat purposes, but they also agreed inadvertently that all women should be required to register for selective services in case the draft is re-instituted. While the talking point was, “Women should be free” in an ironic twist, they were saying “yes” to a restriction, not a liberty, for women. Under all three of these administrations, young women would be required to sign up for selective services and, if a draft was reinstituted, they would be called upon to fight.

Women Should NOT Be REQUIRED to Register…And Neither Should Men.

Ted Cruz came out after the debate and said that women being required to register for the draft is “nuts.” I agree with Cruz for a number of reasons. First, I don’t think women and children should be required to fight for our country. Frankly, I don’t think anybody should be “required” to do so. Currently, the U.S. only requires males ages 18-25 to register for selective services. I think a much better question is,

Should anybody be required to register for selective services?

What was really odd to me was that Jeb Bush insisted that the draft would not be reinstituted, but walked back on the question of eliminating it altogether. Why not? If there isn’t going to be a draft, why are we still registering males 18-25 for it? Here’s a better question: “Why are we discriminating against males 18-25 in our nation?” When we put it like that, it doesn’t sound so good.

Our Military is NOT Weak.

Second, all this talk about requiring men, women, or anybody to register for the draft has a tricky implication. It’s an implication that I don’t think the GOP candidates are picking up on. As they wax eloquent about their support of the military, and the military’s support of them, all I hear them saying is that our military isn’t strong. Every candidate agreed that under Obama our military has been weakened and we no longer project strength in the world. I call foul.

I know they intend to take a jab at Obama, but, in a roundabout way, they are taking a jab at our voluntary military service men and women. Truth be told, the United States has the largest military budget by a long shot than the next seven largest military nations on the planet…combined.

When we’re having conversations about having a weak military, instituting a draft, and calling upon women to be required to register for the draft, are we not communicating the wrong message to our service men and women? Our military is not weak and while we may not have the largest number of enlisted men and women in our military services, we remain in the top ten. Further, I would contend that a 1-to-1 head count of U.S. military men and women to others is not a fair comparison. That may be my national bias pouring out, but I think U.S. servicemen and women are of a different caliber, a nobler, stronger, more persistent type than the average servicemen and women of other nations.

Our Women and Children Are Prized, Esteemed, and Valued.

Third, in the United States of America we highly esteem our women and children. This value placed upon women and children is not found in some of our enemies and it is often overlooked. ISIS, for example, is happy to strap a bomb to the back of a child or a woman to defend their men. America, frankly, is better than that. One of the things that differentiates us from other nations, and which we should be proud of, is that we value our women and children highly. This is not meant to be misogynistic or demeaning to women, but in America our men fight for what we love, treasure, and value. That includes our women and children.

I know some women these days respond to a man opening a door for a woman as offensive or demeaning. It’s not meant to be. We don’t hold doors open because we think women are physically incapable of opening a door. We hold them open out of respect for women. While we know she’s physically capable of opening the door, we value her enough to ensure she doesn’t have to be bothered by it. Have you ever noticed that the President’s limousine driver opens the door for him? Is that because he can’t open it himself? No, it’s done out of respect. The same holds true for our men in combat. They willingly hold that door open so others don’t have to.

Conclusion—It’s An Issue of Liberty, Not Sexism

In conclusion, I want to point out what those on the debate stage completely missed. While the clear goal of the question was to see where candidates would land on women’s rights, this was not a question about the rights of women. Rather, it was a question about government requirements on both men and women. To that, any sensible Republican candidate should have responded by saying,

Frankly, I don’t think any of our best and brightest should be forced to go into combat situations. That’s why, if I’m President, I won’t reinstitute the draft. I believe strongly in our military service men and women, and I am certain that they are up to any challenge that faces this nation today.

Finally, to those who serve willingly to protect the rights, privileges, and freedoms that we are blessed to have in the United States of America I simply say, “Thank You.”