Are you kidding me? What is this garbage?

That’s usually what I’m thinking (but not saying) when I slowly approach the food table at a potluck dinner. Now don’t get me wrong. I’ve had some great food at a potluck dinner. If you’ve ever been to a Baptist sportsman’s dinner you’ve tasted the most delicious game meat you’ll ever find. However, we’ve all been to those potluck dinners where we scoop up what appears to be a tasty dish, and nearly puke our guts out when we put it in our mouths.

In preparation for this post, I tried to get some of your #BadPotLuck experiences…

@CalvinistRamsay#BadPotluck Everyone, and I mean everyone, brought chili.

Honestly, though, hell is a serious subject. The London Baptist Confession has this to say…

“…the souls of the wicked are cast into hell; where they remain in torment and utter darkness, reserved to the judgment of the great day.

Jesus often describes this torment in terms of “weeping” and “gnashing” of teeth. The Greek word for “weeping” is used on two other occasions. The first is in Matthew 2:18 when Herod decided to slaughter all the firstborn in an effort to kill Jesus. The text tells us that there was great mourning and “weeping” for the children. The other instance is when the apostle Paul leaves Ephesus for the last time in Acts 20:37. The church members at Ephesus know that they will never see Paul again, and they are saying their final good-byes. We are told that they “wept sore.” Hell is going to be a place where the most painful sort of tears will be shed… forever. The emotional torment that typically lasts only for a season here on earth, will last for an eternity in hell.

The word for “gnashing,” or grating of teeth, is used in this way only in passages where Jesus is describing the final torment. On different occasions, Jesus describes the place where the wicked will go as either a “furnace” or a place of “darkness.” Albert Barnes writes,

It is not improbable that the image was taken from Roman dungeons or prisons. They were commonly constructed under ground. They were shut out from the light of the sun. They were, of course, damp, dark, and unhealthy, and probably most filthy. Masters were in the habit of constructing such prisons for their slaves, where the unhappy prisoner, without light, or company, or comfort, spent his days and nights in weeping from grief, and in vainly gnashing his teeth from indignation. The image expresses the fact that the wicked who are lost will be shut out from the light of heaven, and from peace, and joy, and hope; will weep in hopeless grief, and will gnash their teeth in indignation against God, and complain against his justice.

That paints a pretty bleak picture. One of the things that is going to make hell so hellacious is the fact that those in hell will have some awareness of those in heaven. We read in Scripture,

In that place there will be weeping and gnashing of teeth, when you see Abraham and Isaac and Jacob and all the prophets in the kingdom of God but you yourselves cast out. ~Luke 13:28

And another angel, a third, followed them, saying with a loud voice, “If anyone worships the beast and its image and receives a mark on his forehead or on his hand, he also will drink the wine of God’s wrath, poured full strength into the cup of his anger, and he will be tormented with fire and sulfur in the presence of the holy angels and in the presence of the Lamb. ~Rev. 14:10

Some take this to mean that the initial judgment will occur in the presence of the Lamb and the saints. Others have taken it to mean that a part of the eternal torment will be that the wicked will forever have before them the salvation they could have enjoyed had they not rejected Christ. Either position seems to serve the same purpose.

There are those who think that hell will be a big party. It won’t. It will be like an eternal bad potluck dinner. Unbelievers will constantly be shoveling in food that appears to be great and it will ever be disgusting and unsatisfying. Meanwhile, as they’re eating bad chili, macaroni pizza, green bean casserole, and mayo covered Jell-O, they’ll gaze upon the saints dining with the Lamb as they feast on the delicious blessedness of his presence entirely provided by his incredible grace.

Trust me, you don’t want to be at the potluck dinner where everyone has to trust their own culinary expertise. You want to be at the dinner where Christ, our Caterer, provides the entire meal. When it comes to eternal matters, it’s best to trust the professional. In this case, there’s only one who knows how to do it right, and that’s Jesus Christ. Trust him, and leave your Mayo-Jello at home.

(For fun, tweet your worst experience at a potluck dinner and use the hashtag #BadPotLuck) 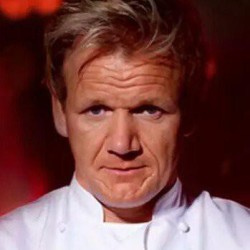