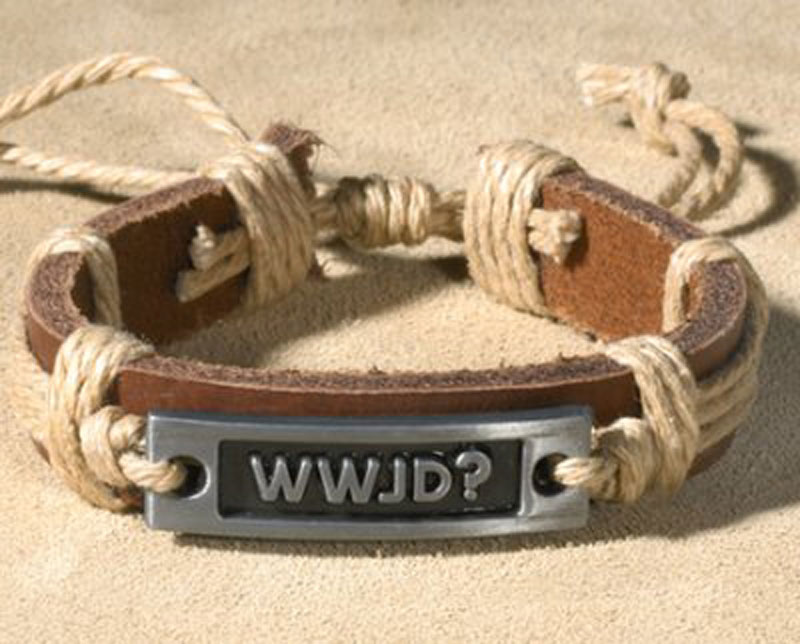 WWJD? – What Would Jesus Do?

Remember back in the 90s when the “WWJD” bracelets became a Christian phenomenon? I was in youth group at the time and my parents were in the Christian bookstore business. Those bracelets sold like crazy. For a brief period of time very few Christians could be seen without one.

As I got older, and began thinking more theologically, I started taking that question a little more seriously. I’ve discovered that there are a lot of times when following that catch-phrase would not really work in local churches today. In chapter nine of my book The Fury of God I discuss a number of examples where Jesus acted in ways that go against our typical perception of him. I argue in that Jesus seems to get angry a lot more often than we want to admit.

This raises an important question: If we call ourselves Christ followers, should we seek to follow him in all aspects of life? What if the answer to, “What Would Jesus Do?” was not what we would expect it to be? More specifically, what if what Jesus would do isn’t very nice?

Get Behind Me Satan!

I want you to imagine a church business meeting. If you’re not in a congregational church then imagine a leaders meeting or an elders meeting. Imagine that everyone is discussing a particular topic and one individual begins rebuking another for something they’ve said. In a sharp tone the one being rebuked fires back, “Get behind me, Satan!”

In your mind’s eye, as you are imagining this scene, which one of these individuals is acting like Christ?

I would suspect that the average Christian would feel like both individuals in this scenario were out of line. We might say that it wasn’t right for the first person to publicly rebuke the second in the first place. We might also say that the one being rebuked didn’t respond in a very kind manner. He just cut the other person off without any discussion. This is exactly what transpired between Peter and Jesus in Matthew 16:22–23.

Jesus is prophesying his death and Peter takes him aside and begins rebuking him. Let me just say in passing how ridiculous it seems for Peter to be rebuking Jesus. In any case, Peter tells Jesus that what he’s saying will not come to pass. He tells Jesus that the cross will not happen! Immediately Jesus cuts him off and says, “Get behind me, Satan.” Can you imagine how this made Peter feel? In my book I ask a few questions about this story,

As Jesus berates Peter, is He being sinless? Was this the perfect way to respond? I think many in the church… would say Jesus could’ve been a little nicer to Peter. (Fury of God, 190)

If Jesus lived a perfect life—that means, at least in this instance, being nice to Peter was NOT the right response. Jesus responded precisely as he ought to have responded. If this was the right response for Jesus, are there times when we should emulate Christ in this type of response?

Should Christians Always Be Nice?

In “The Fury of God” I outline a number of instances where Jesus comes off as…well…not nice. The most famous instance is when he constructs a whip of chords and flips the tables of the money changers. In Matthew 23 there’s a whole chapter of Jesus chewing out the Sadducees and pharisees. Earlier in Matthew, he calls down curses on the entire cities of Chorazin and Bethsaida.

If these examples represent, even in a small way, what Jesus would do it seems incumbent upon his followers to consider when and where they should emulate him. Let me put it another way. If there was a situation where we know that Jesus would act in a loving and kind manner, and we simply decided not to, would that be ok? Would we be following Christ if we refused, for example, to forgive an enemy who offended us?

When It’s Wrong to be Nice

This notion may be uncomfortable to some readers. Let me use an extreme example to illustrate there are times when “being nice” is not equal to being Christlike. Suppose you were walking down a dark alleyway and you came upon a paraplegic being beaten to a pulp. His wheelchair has been mangled by his assailant and he is being beaten unconscious as you approach. What, dear reader, is the right response? What Would Jesus Do?

In a moment like this, holy rage is not only allowed, it is required. As believers in Christ we have an obligation to do what is right. What is right is not going to seem nice to the assailant. It’s going to seem down right mean.

Being Christ-like is not equivalent to sheepish docility… There are times when being Christ-like requires we not only live peaceably, but at times it means we disrupt the peace for the sake of righteousness. Christ-likeness is finding the Biblical balance between what God loves, and what He hates. (Fury of God, 195-6)

It Begins With Me

It’s easy to read this post, and the corresponding chapter, and begin to target people around us who may be living in sin. Like Jesus, we may want to fashion a whip and run to the proverbial temple and start flipping over some tables. Slow down. Before we get enraged at the sins of others, and begin “cracking the whip” on our brothers and sisters in Christ, we ought to take issue with the sin residing in our own hearts.

…those who seek to take up the banner of anger in Jesus name… ought to slow down and ensure that their anger is indeed righteous. Furthermore, they ought to first direct their righteous indignation at the sin that resides in their own heart. It is not until the beam has been sufficiently removed from our own eyes that we ought to seek to remove the specks from the eyes of our brothers and sisters in Christ. (Fury of God, 196)