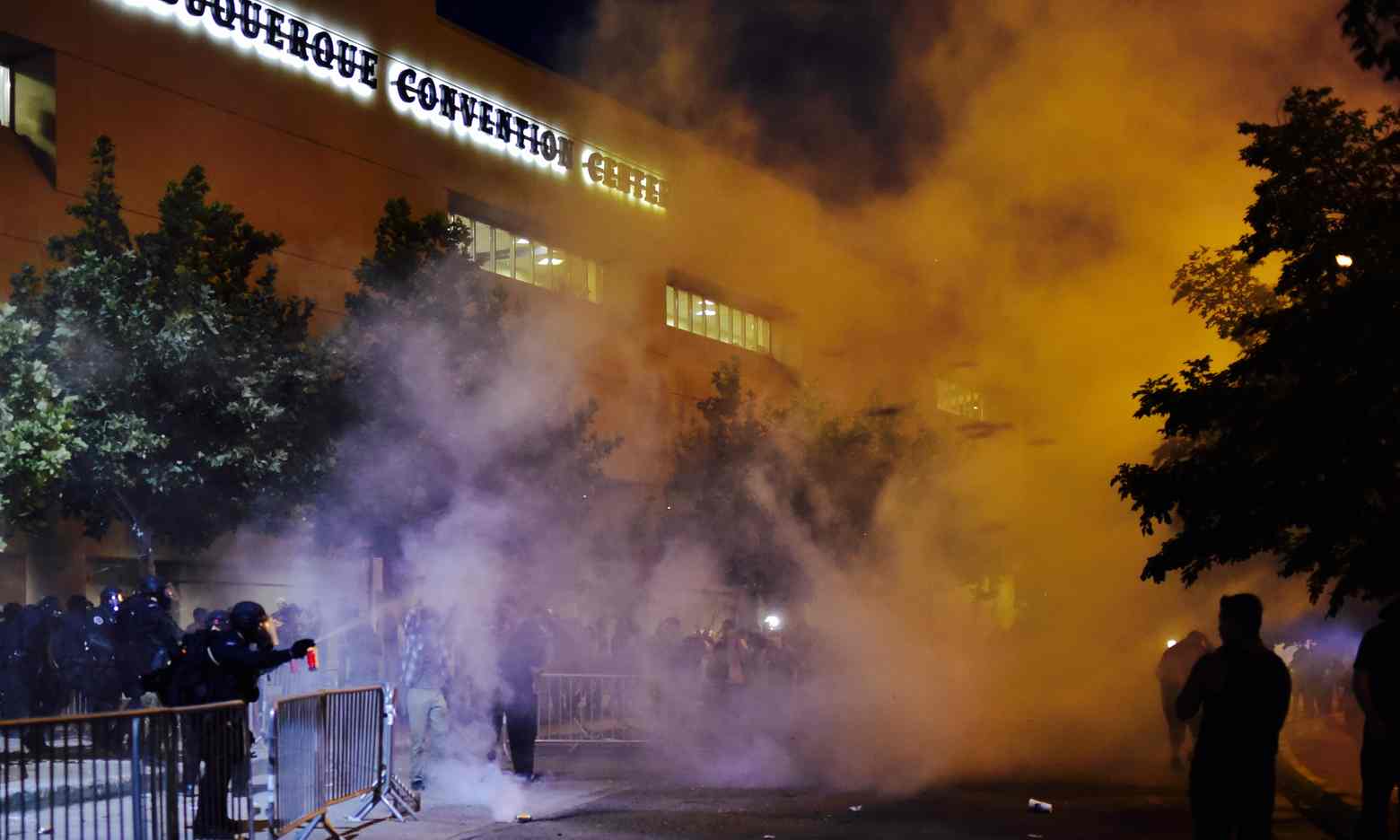 If you’ve been paying any attention to the news you’ve seen a number of videos of protesters, media personnel and audience members getting into brawls at rallies for Presidential hopeful Donald J. Trump. There are a number of issues that are emerging from these events.

First, Trump’s security and staff have been filmed roughly grabbing media personnel ( Michelle Fields), body slamming photographers through tables ( Seen Here ), and grabbing protesters by the cuff of the neck ( Seen Here ). The first issue has to do with how free speech, freedom of the press, and freedom to protest might be handled under a Trump Presidency.

Third, there is the media’s wall to wall coverage of these events in conjunction with coverage that implies or explicitly states that the GOP may be colluding to stop a Trump Presidency with a contested or brokered convention. As recently as last Wednesday Politico reported that John Boehner (Former Speaker of the House) was backing Paul Ryan (Current Speaker of the House) for nomination if a contested or brokered convention were to occur. This last issue relates to what may be contributing to heightened voter frustration and packing the powder keg leading up to these ralleys.

First, we want to discuss the actions of Trump and his personnel which may be contributing to violence. At a number of his rallies Donald Trump has, incidentally, called for violence. A comedy central bit with Trevor Noah highlights this concerning fact by noting that Trump has gone so far as to say he’ll pay for the legal fees if his supporters “knock out” protesters. Whether Trump sees this as humorous, joking, or he’s serious, he’s setting the stage for violence against protesters at his rallies. More on that in a moment.

Also, Trump’s security has, on numerous occasions, resorted to what appears to be unnecessary levels of violence. In the case of Michelle Fields, it was a grab that left bruising on her arms. In the case of Christopher Morris of TIME magazine, a violent choke slam into a table left him flat on his back and utterly shocked. As for the audience member noted above, it was a grab to the lanyard or collar of the neck that resulted in brief choking. All of this tends to set the atmosphere for future events, and tends to give audience members a sense of what to expect and what may be permitted and expected at these rallies.

Furthermore, as Trump approaches closer and closer to securing the Republican nomination, protesters and Trump detractors begin to worry that this is a sign of things to come. Under a Trump presidency will freedom of speech be silenced? Will media be suppressed? Will a Trump in charge of the U.S. Military be setting the stage for extremely violent reactions to those who express free media, and free speech? This reality drawing closer and closer heightens the fear that may be driving some of the tendency to violence.

Trump and his staff aren’t all to blame. Let’s be honest. Trump’s supporters are a wide ranging bunch from evangelical leaders to KKK affiliates. You could argue that Trump is to blame but these folks existed long before Trump entered the race. Many of them have been largely uninvolved in election processes in the past. Thus far, nobody has given voice to their pet issues.

Many of Trump’s supporters feel disenfranchised by the last seven years of what they considered to be socialistic policies being thrust down their throats. The “establishment” has largely ignored them for the larger part of two decades and cut deals to fill their pockets rather than listening to and representing the people who elected them.

Donald Trump is the ultimate anti-establishment candidate. He says what’s on his mind and sticks it to those who think they are in control. He’s become the voice of middle-lower class individuals who feel suppressed by their government, their boss, and their opposition. These folks dream of sticking it to the man and they’ve finally found a man who can afford to stick it to the man. No one controls him. He does what he wants, and says what he wants. If we’re honest, he’s the embodiment of the “American Dream.” His supporters are finally tasting an opportunity to get one over on those they feel are suppressing them, and that hope is insatiable. They’re desperate for a voice and they’ll be darned if they’re going to let the media, the establishment, or “the man” get in the way of that.

On the other side of the battle field are those who are protesting Trump rallies. Those who feel they’ll be suppressed if Trump becomes president. They are minorities, left wing democrats and liberals, and die hard republicans who see Trump as an affront to their political party. Just as desperate as the Trump supporter, they have a voice they don’t want to lose. Both sides feel the other is taking something deeply important to them away, and that makes them both desperate.

The Media Asking the Questions Leading to Violence

Finally, you have the media shoveling coals onto the fire. Sure, they’ll say they’re just reporting the news. We all know they have an agenda and that agenda is, frankly, selling media. If you haven’t figured this out about all mediums, it’s always about the advertising dollars. More viewers means more views which translates to more advertising value on their networks. “Just reporting the news” doesn’t exactly pay the bills. The news has to be juicy. It has to be entertaining. It has to be exciting.

In an election year where the establishment is on the ropes in all parties, what could be more juicy than the man giving voice to the people being shut down by the establishment they all hate so much. Fueling the rage, the media juxtaposes Trump rally violence with talk of a brokered convention. They like to project the responsibility onto Trump, his speeches, and his campaign. All the while they’re throwing coals onto the fire as they secretly hope the violence continues so the ratings go up. They want nothing more than the rage to boil to the brim, Trump to get more erratic, and the GOP to crumble into a contested convention that they can fill their news media outlets (and advertising spots) with 24/7.

Conclusion – Who’s to Blame for the Violence?

At the end of the day, this monster is being fueled by a number of factors. It’s not just Trump. It’s not just protestors at Trump’s rallies. It’s not just the media. No. These outbursts of anger are a combination of all of these factors. Donald Trump is a controversial figure who has the resources to do whatever he wants. The establishment is drunk with power and desperate to retain it at all cost. The American people en masse are fed up with a lack of representation and deteriorating liberty. As we draw closer to a Trump presidency, the desperation will only escalate and, likely, the violence will escalate with it.

In the meantime, Christians ought to remember that they are members of a heavenly kingdom. The desperation that is consuming all sides of this election cycle ought not to consume us. We are not in desperation because we know the King of kings who has already established the next leader of this nation. That leader may be a part of God’s plan to restore America to better days or to bring further judgment on this nation. Either way, together we sing…

A mighty fortress is our God, a bulwark never failing;
Our helper He, amid the flood of mortal ills prevailing:
For still our ancient foe doth seek to work us woe;
His craft and power are great, and, armed with cruel hate,
On earth is not his equal.

Did we in our own strength confide, our striving would be losing;
Were not the right Man on our side, the Man of God’s own choosing:
Dost ask who that may be? Christ Jesus, it is He;
Lord Sabaoth, His Name, from age to age the same,
And He must win the battle.

And though this world, with devils filled, should threaten to undo us,
We will not fear, for God hath willed His truth to triumph through us:
The Prince of Darkness grim, we tremble not for him;
His rage we can endure, for lo, his doom is sure,
One little word shall fell him.

That word above all earthly powers, no thanks to them, abideth;
The Spirit and the gifts are ours through Him Who with us sideth:
Let goods and kindred go, this mortal life also;
The body they may kill: God’s truth abideth still,
His kingdom is forever.

Photo via The Guardian