Peter Goldsberry: On A Spiritual Journey

My life has been and continues to be a spiritual journey. Growing up in New Jersey, I was brought up a Roman Catholic. One of the more memorable moments in my early life was reaching an age where I could become an altar boy. I took such pride and evident enjoyment in my altar boy responsibilities that I was chosen to serve mass for a Bishop.

In high school I was a better than average football player who would not come out of the locker room until I had finished my prayers. I had a crucifix hung proudly in my locker where all could see. My nickname was “Padre,” and most everyone in my family thought that the priesthood was a distinct possibility for me.

In college I continued to date my high school girlfriend. I excelled academically, achieving dean scholar status with national honors recognition. However, all of the academic accolades couldn’t prepare or protect me from my father being diagnosed with terminal cancer. Football became less than fulfilling and quickly seen in my rear view mirror.

My junior year of college, after knowing about my being honored for academic achievement, my father went to be with the Lord. Priorities quickly were reset and my life changed in an instant. I will never forget the first night back at college after burying my father. I couldn’t sleep and suddenly was lead to the college book store to purchase the last paperback Bible on the shelf.

Following my graduation from college, I married my high school sweetheart Amy and started working with a blue chip company in Campbell Soup. I pursued my MBA at night while working full-time and discussing with my wife the idea of starting a family. (Today: Tyler 19 and Carly 15.) Everything was going great and I was hitting my stride. However, I felt God had taken a backseat to my many ambitions.

My wife and I started exploring different churches, meeting with priests and pastors alike. We fell in love with a pastor of a Presbyterian church in Toms River, NJ. I quickly got involved in a Tuesday Bible study group and started to find my spiritual stride. I began to read and study the Bible with the same passion I had for business statistics.

Fast forward, I was offered an executive position with the NBA. The position was in New Orleans with the Hornets and I was not at all sure how my wife would respond. New Orleans was all but destroyed by Katrina less than a year prior to the job offer. My wife was incredibly supportive and we started looking for homes and a good school system for our two children.

While with the Hornets, I felt the opportunity to spread the Gospel and God’s love to be unprecedented. I hit the ground running working with Owner George Shinn building a Faith and Family Night where over 10,000 Psalm books were distributed. At the Faith and Family events, we had Point of Grace performing and the American Bible Society handing out Psalm books and catching the national media’s eye. The Hornets were on TBN’s “More Than Conquerors” where George Shinn, Byron Scott, Chris Paul, and I were featured. All glory was given to God!

Today, I reside in the state that I grew up in—New Jersey. My family is very happy to be back in an area that is all too familiar. I work for a great organization commuting to the headquarters in northern New Jersey. The drive time gives me the opportunity to listen to God’s word and also pray. I am so excited to be a part of Theology Mix where I can share some great stories and experiences. 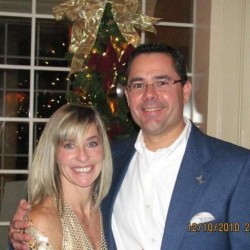