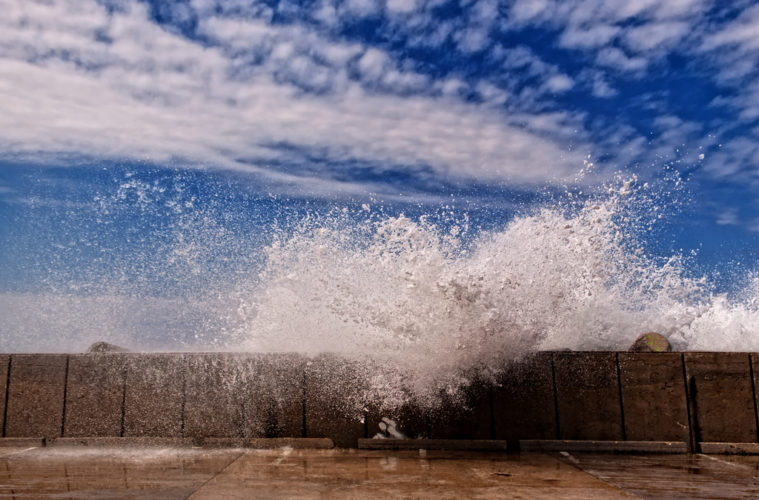 God is our refuge and strength, an ever-present help in trouble. Therefore we will not fear, though the earth give way and the mountains fall into the heart of the sea, though its waters roar and foam and the mountains quake with their surging.
-Psalm 46:1-3

I experienced a major earthquake while living in California, and while living in Illinois heard tornado warnings more than once. I admit I was frightened and thought for sure I was doomed. But then I would remember to pray and was comforted by God’s presence. The psalmist also speaks of the sea’s ability to destroy. Dr. Snyder explains what the sea meant to the Hebrews.

“The Hebrews had a great respect and fear of the sea because for them it was the symbol of evil and chaos. There were all sorts of things in it that could hurt them. That’s why the apostle John was shown a vision of the future, unshakable kingdom where there was no more sea (Rev. 21:1), a way of saying that evil and chaos wouldn’t be there. But in the meantime, chaos and evil seem at times to run rampant with no boundaries on what they can do.

“Evil is always on a leash and can do no more than God allows, but sometimes that’s just not evident. Evil surges like the sea and great waves can arise from nowhere to carry us away with their power. Yet the psalmist, who knew plenty about life’s troubles, was absolutely convinced that God is in total control of all things at all times and remains for us a refuge and strength. He was and is an ever-present help in time of trouble.

“We tend to have short memories in these matters and quickly forget those times when God delivered us. Today’s crisis trumps yesterday’s rescue. But God isn’t as fickle as we usually are toward him, and he doesn’t change his mind about us overnight. So keep yesterday clearly in mind because our history shapes the way we see our future.

TODAY’S PRAYER: Are you getting weary today of waiting and praying? It might be time for some remembrance. Keep your history before you by recalling all that God has done for you and all his people. He was never too early or too late. Now thank him for his faithfulness that never changes.