What is the Word of God?

Question 4 – What is the Word of God?

“All Scripture is breathed out by God and profitable for teaching, for reproof, for correction, and for training in righteousness.” – 2Ti 3:16 ESV

All Scripture is given by inspiration of God, That is, all holy Scripture; for of that only the apostle is speaking; and he means the whole of it; not only the books of the Old Testament, but of the New, the greatest part of which was now written; for this second epistle to Timothy is by some thought to be the last of Paul’s epistles; and this also will hold good of what was to be written; for all is inspired by God, or breathed by him: the Scriptures are the breath of God, the word of God and not men; they are “written by the Spirit”, as the Syriac version renders it; or “by the Spirit of God”, as the Ethiopic version. The Scriptures are here commended, from the divine authority of them; and which is attested and confirmed by various arguments; as the majesty and loftiness of their style, which in many places is inimitable by men; the sublimity of the matter contained in them, which transcends all human understanding and capacity ever to have attained unto and discovered; as the trinity of persons in the Godhead, the incarnation of Christ, the resurrection of the dead, &c. The purity and holiness of them before observed, show them to be the word of him that is of purer eyes than to behold iniquity; as also their harmony and agreement, though wrote by different persons, in different places, and ages, and at sundry times, and in divers manners; what seeming inconsistencies are observed in them may, with labour and industry, by divine assistance, be reconciled. The predictions of future events in them, as particularly concerning Josiah and Cyrus, by name, long before they were born, and especially concerning Jesus Christ, and which have had their accomplishment, and many others in the New Testament both by Christ and his apostles, are a proof that they could not be the writings of men, but must have the omniscient God for their author; the impartiality of the writers of them, in not concealing the mean extract of some of them, the sins of others before conversion, and even their sins and failings afterwards, as well as those of their nearest relations and dearest friends, strengthens the proof of their divine authority; to which may be added, the wonderful preservation of them, through all the changes and declensions of the Jewish church and state, to whom the books of the Old Testament were committed; and notwithstanding the violence and malice of Heathen persecutors, particularly Dioclesian, who sought to destroy every copy of the Scriptures, and published an edict for that purpose, and notwithstanding the numbers of heretics, and who have been in power, as also the apostasy of the church of Rome; and yet these writings have been preserved, and kept pure and incorrupt, which is not the case of other writings; nor are there any of such antiquity as the oldest of these: to which may be subjoined the testimony of God himself; his outward testimony by miracles, wrought by Moses and the prophets, concerned in the writings of the Old Testament, and by the apostles in the New; and his internal testimony, which is the efficacy of these Scriptures on the hearts of men; the reading and hearing of which, having been owned for the conversion, comfort and edification of thousands and thousands, and ten thousand times ten thousand: and

is profitable for doctrine; for the discovering, illustrating, and confirming any doctrine concerning God, the being, persons, and perfections of God; concerning the creation and fall of man; concerning the person and offices of Christ, redemption by him, justification by his righteousness, pardon by his blood, reconciliation and atonement by his sacrifice, and eternal life through him, with many others. The Scripture is profitable for ministers to fetch doctrine from, and establish it by; and for hearers to try and prove it by:

for reproof; of errors and heresies; this is the sword of the Spirit, which cuts all down. There never was, nor is, nor can be any error or heresy broached in the world, but there is a sufficient refutation of it in the Scriptures; which may be profitably used for that purpose, as it often has been by Christ and his apostles, and others since in all ages:

for correction; of vice; there being no sin, but the evil nature of it is shown, its wicked tendency is exposed, and the sad effects and consequences of it are pointed out in these writings: for instruction in righteousness; in every branch of duty incumbent upon men; whether with respect to God, or one another; for there is no duty men are obliged unto, but the nature, use, and excellency of it, are here shown: the Scriptures are a perfect rule of faith and practice; and thus they are commended from the usefulness and profitableness of them. [Gill]

“built on the foundation of the apostles and prophets, Christ Jesus himself being the cornerstone” – Eph 2:20 ESV

And are built upon the foundation of the apostles and prophets, The prophets of the Old Testament, and the apostles of the New, who agree in laying ministerially the one and only foundation, Jesus Christ; for not the persons of the apostles and prophets, nor their doctrines merely, are here meant; but Christ who is contained in them, and who is the foundation on which the church, and all true believers are built: he is the foundation of the covenant of grace, of all the blessings and promises of it, of faith and hope, of peace, joy, and comfort, of salvation and eternal happiness; on this foundation the saints are built by Father, Son, and Spirit, as the efficient causes, and by the ministers of the Gospel as instruments: these lie in the same common quarry with the rest of mankind, and are singled out from thence by efficacious grace; they are broken and hewn by the word and ministers of it, as means; and are ministerially laid on Christ the foundation, and are built up thereon in faith and holiness; yea, private Christians are useful this way to build up one another:

Jesus Christ himself being the chief corner stone; which cements and knits together angels and men, Jews and Gentiles, Old and New Testament saints, saints above, and saints below, saints on earth, in all ages and places, and of every denomination; and which is the beauty and glory, as well as the strength of the building, which keeps all together; and Christ is the chief, the headstone of the corner, and who is superior to angels and men. This phrase is used by the Jews to denote excellency in a person; so a wise scholar is called פינה אבן, “a cornerstone”; see Ps 118:22. It may be rendered, “the chief cornering-stone”; it being such an one that is a foundation stone, as well as a cornerstone; and reached unto, and lay at the bottom of, and supported the four corners of the building; for the foundation and corner stone in this spiritual building, is one and the same stone, Christ: it is said of the temple of Latona, at Buto, in Egypt, that it was made, εξ ενος λιθου, “of one stone”, as Herodotus (k) an eyewitness of it, attests. [Gill]

Answer – The Holy Scriptures of the Old and New Testament are the Word of God, and the only certain rule of faith and obedience. 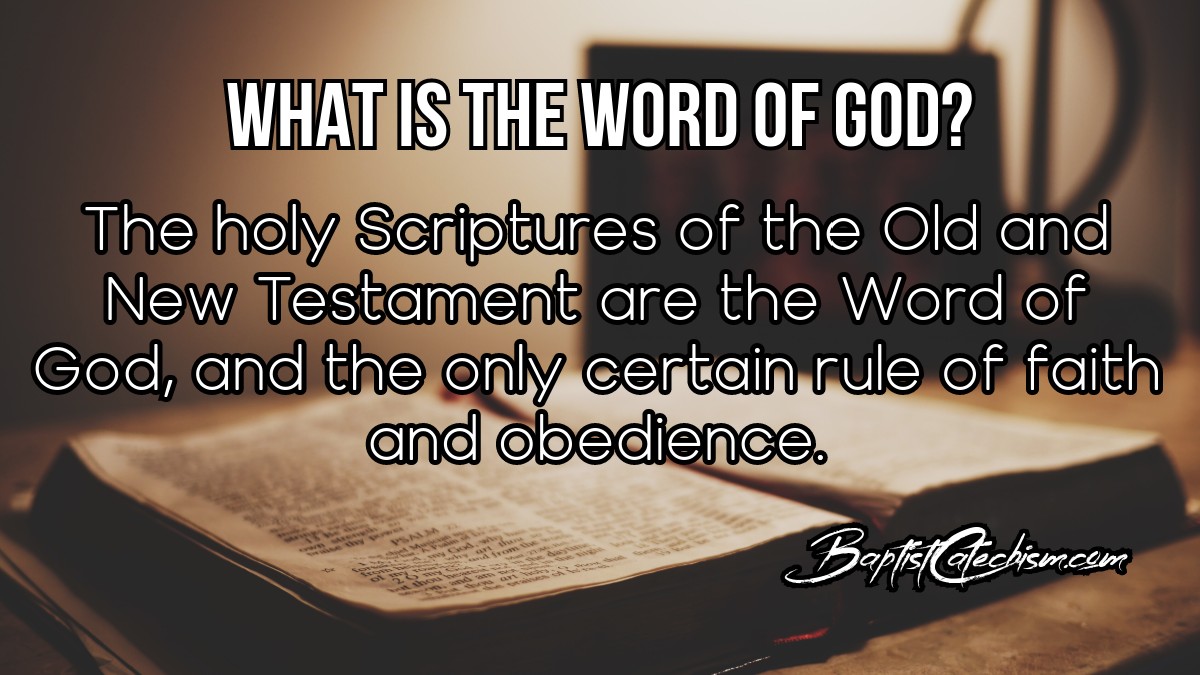 Photo by David Beale on Unsplash

Hey God, I Have a Question Series: Is It Possible to Love Everyone?

On the Ground Looking Up: A Call to Love

If We Ban the Wrappers, No One Will Ever Touch the Straws | TMBH Luke #22