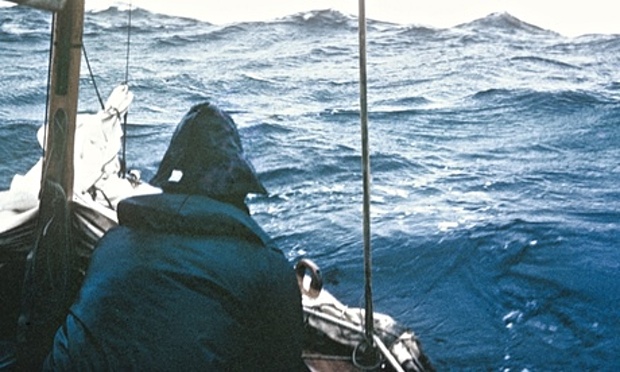 Having a Grey-Green Day? God: The Antidote to Fear

God is our refuge and strength, an ever-present help in trouble. Therefore we will not fear, though the earth give way and the mountains fall into the heart of the sea, though its waters roar and foam and the mountains quake with their surging. The Lord Almighty is with us; the God of Jacob is our fortress.
-Psalm 46:1-3,11

“By mid-afternoon it was clear even to Frank Dye that the summer cruise was not going to plan. The storm had been building in the northeast Atlantic since noon and by 5.30pm had reached what the Met Office described as a “severe gale”, force nine on the Beaufort scale. Banshees were screaming round Dye’s boat at close to 50 knots, and the sea had been whipped into a deafening grey-green mountainscape whose waves stood four storeys high. It was the sort of day on which fishermen drowned, but Dye and his crewman Bill Brockbank were out in it, in the middle of the Norwegian Sea, in a little sailing boat called Wanderer.” To find out how this story ends, click here.

The overwhelming force of the green water wave fills with dread those out at sea. This enormous, destructive force washes over the deck of the ship and sweeps away almost everything in its path. Even on modern warships, I am told, large pieces of firmly attached iron can disappear in an instant with a giant green wave.

John Newton, the composer of Amazing Grace, described the moment he finally gave his will over to God. One of the worst human beings of the 18th century (a slave trader), he had fought hard and long against God’s stubborn grace. Returning repeatedly to his selfish and sinful life, he was once caught up in a tremendous sea storm in the Atlantic where he witnessed the awesome power of the grey-green wave as, in a split second, it washed a man into eternity.

One day during a long voyage, a fierce storm struck. The ship lurched and rocked as the violent storm raged. Climbing the huge waves, the boat plunged time after time, crashing into the ocean on the other side. With each fall, more and more of the ship’s contents spilled into the raging water. As an experienced sailor, John Newton had ridden out many a fierce storm before, but never had he come this close to death. As the ship began to break into pieces and water rushed in everywhere, one sailor washed overboard. A few hours later when John faced certain death, he began to recall Bible verses his mother had taught him. John, who couldn’t swim, heard himself cry, “Lord, have mercy on us.” But then he thought, “What mercy can there be for a wretch like me”? As John began to tell God he was sorry for turning away from Him and for doing so much wrong, he began to feel peace in his soul. (To read more, click here).

The green wave is a graphic image that captures the state of the soul when a sudden heartbreak sweeps through your life. Its force takes you off guard with its total, life altering power to reverse everything you had thought before, and turn upside down all that you believed about God, the Christian faith, and the world in general.

What’s the antidote to the fear and dread that arises in the heart at such a wave of destruction? John Wesley discovered it when he experienced a similar sea storm in the same century and in the same ocean. When his ship was tossing and turning, climbing up, and then sliding down the mountainous waves before him, he looked over and saw a group of people on deck who just sat together calmly, praying, and seeming utterly unmoved by the terrors filling the hearts of others. He called them “the Germans,” Christians who appeared utterly fearless in the face of the deadly grey-green water rising all around them. He asked God what was in them that wasn’t in him. What had God put into their hearts that he hadn’t in his? The question haunted him long after the storm had passed and he had arrived safely in England. One evening while attending a prayer meeting, he felt “strangely warmed,” something entered the core of his being that changed things for him—forever.

It was an inexplicable, unshakable confidence that Jesus Christ was his Savior and that all the fears of this life were unfounded. He carried this trust with him throughout the forty years and a quarter-million miles on horseback as he took the Gospel to the dark and fearful souls of England and America.

What’s the solution to life’s many grey-green waves? It’s the faith only God can give. It’s his unmerited gift to every one of his elect, those who are to obtain salvation. God seems to parcel it out when it’s needed, and usually not before. It comes with the storm.

In the words of Dutch evangelist Corrie Ten Boom, this faith is like the train ticket her father gave to her just prior to the train’s arrival. When it’s the right time for it, it’s granted, and only God can know exactly when that time is. What we can do is want it, ask for it, and wait for it.

I burst into tears, “I need you!” I sobbed. “You can’t die! You can’t!” “Corrie,” he began gently. “When you and I go to Amsterdam, when do I give you your ticket?” “Why, just before we get on the train.” “Exactly. And our wise Father in heaven knows when we’re going to need things, too. Don’t run out ahead of him, Corrie. When the time comes that some of us will have to die, you will look into your heart and find the strength you need – just in time.” -Corrie Ten Boom