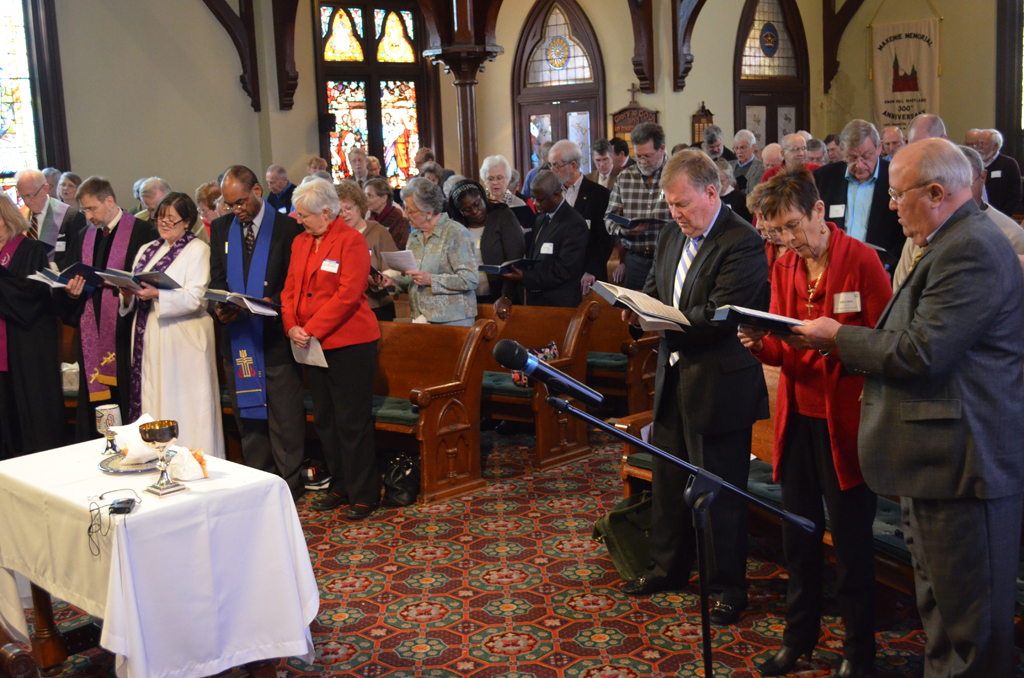 The Solution to Young People Leaving the Church

Over the last few years, a number of books and studies have emerged demonstrating a marked decline in church attendance among those who grow up in the church. Probably the most notable study is one by George Barna in 2002, and quoted in Already Gone, a book by Ken Ham & Britt Beemer, which states that “61% of…young adults who were regular church attendees are now ‘spiritually disengaged.’” This statistic led to the development of a number of books, blogs, sermons, articles, and even a movie dedicated to determining the cause of why so many young people are leaving the church.

Ken Ham has argued, rightly, that part of the reason we’re seeing young people leave the church is because we’re not committed to teaching the Bible as historically accurate. While that’s not the whole problem, I do see Ken Ham’s thoughts as foundational to moving in the right direction. In the movie/documentary Divided put out by the National Institute for Family Integrated Churches , one of the implied reasons for the departure of young people from church is the segregation of young people from the rest of the church into “youth ministries.” You can watch the movie here.

I want to preface my thoughts by saying that I have not done extensive research on this subject, so my thoughts are limited to my own personal experience. That said, I believe what I’ve experienced, personally, speaks to the real issue behind why youth are leaving the church.

Youth Ministry Is Not the Reason Youth Are Leaving the Church

When I first saw Divided, my thoughts towards it were quite favorable. However, after dwelling on the notion of getting rid of segregated church ministry, I realized that doing so would be in direct opposition to how God has worked in my own life. I’m not a pragmatist by any means. We are not to execute ministry based on what works and what doesn’t. Our approach ought to be biblical. Still, to say that youth ministry (or the youth pastoral roll) is unbiblical because it’s not specifically mentioned in Scripture, is taking a leap in logic that I’m not willing to make.

In my own personal life, youth ministry, and a youth pastor, played a significant role in directing me toward pastoral ministry. I would dare say had it not been for direct involvement in segregated ministry I WOULD have left the church. The concern that Divided has regarding youth ministry taking the place of the parental roll is a good concern. Still, in my personal walk it was not as though youth ministry took the place of parental involvement. My parents were not somehow deficient in raising me in the fear and admonition of the Lord. In fact, involving me in a youth ministry was an action done by wise parents to help aid the process of spiritual development. Further, so far from driving me away from the church, it was youth ministers and Sunday school teachers who drove me towards a pursuit of Jesus Christ.

I appreciate Ken Ham’s work on this subject and I think it’s absolutely foundational to understanding the big picture of the problem. Ken Ham argues, in short, that we need to raise kids under the teaching of Scripture not as fictional stories, but as historical fact. We need to teach them that Genesis is fact, that the Bible is historical, and that it is not logically inconsistent with science. I agree. Again, I do not think this is the heart of the problem. In fact, I would contend that this is a symptom of a much bigger problem. Ham touches on this briefly in Already Gone, but I think the emphasis actually needs to lean more in the direction of how the Bible is lived out in our lives, rather than how it is taught in our churches. I would contend that how it is lived out in our lives is going to be in direct correlation to how we teach it in our churches.

The Real Reason Young People Are Leaving the Church

Both Already Gone and Divided touch on an issue that is lurking in the background of this immense problem, but they never quite zero in on it. Ken Ham touches on it in his chapter  “the real deal” when he discusses the problem of hypocrisy. The reason young people leave the church is because they discover that their parents, teachers, and pastors do not live lives that are dependent upon the Gospel revealed in the Scripture. They discover that adults have a high view of the Word of God on Sunday, but an extremely low view of it on Monday through Saturday.

I agree that the statistic that 61% of young people become disengaged is startling. However, should it really be all that startling? In another study done by Barna on America’s Most and Least Bible-Minded Cities , the researchers defined a person as being Bible-minded if they believed in the accuracy of the Bible and whether or not they had read the Bible in the last seven days. The best cities on the map reached a dismal 52%. In the cities surrounding my church, we barely reached the 20% mark.

As I thought about the definition of “Bible-minded,” I began to wonder how many of the people in our churches, and Christian schools, could say they had read the Bible in the last seven days.

I think the real reason young people are leaving the church is because they see the disparity between Sunday and Monday Christianity. On Sunday, Christians are gung-ho for the mission of Christ. On Sunday, they love the Word of God and sing praise to him. On Sunday, Christ is all they ever need. On Sunday, he is more precious than silver or gold. However, come Monday morning, the mission of Christ is all but forgotten. On Monday, the Word is forgotten as we rush our kids off to school and ourselves off to work. On Monday, we don’t sing the praises of God, we march to the trumpet of the world. On Monday, Christ disappears into the hustle and bustle of what, in the eyes of our young people, appears to really matter to us.

One of the ironies of these studies is that they often look at statistics that relate to the very people who analyze them, and then write blogs, books, and sermons about them. Those authors, pastors, teachers and preachers are often comfortable saying “we have a problem,” but few are comfortable saying “we are the problem.” Even less are comfortable saying “I am the problem.” Here’s the reality, young people are leaving the church because churched people are not in the Word. Churched people are not relying on the very Christ that they preach week in and week out. Christians who are begging their kids to come to Christ, to rely on Christ, to depend on Christ are not, themselves, doing ANY of those things in all practicality.

In many cases, they want their kids to become something they’ve never been, nor will they ever be. They want them to read their Bible and pray every day so they’ll “grow, grow, grow.” However, very few are in the Word every day, and even fewer pray. What’s worse is that sometimes adults in the church set up false and unbiblical standards that stunt real growth in young people. Young people start to see the church as a place where they will never live up to be good enough, or a place where there’s no room for them to serve or be involved. In some ways, I don’t blame them for leaving!

What is the solution? The solution is always the Gospel. One of my concerns with young people and the church is that we are not living out the entirety of the Gospel in front of them. What I see most often in the churched culture is that it portrays a “cleaned up” look that young people ought to aspire to. The truth is the Gospel is not about cleaning oneself up. Rather, it’s about Christ cleaning us up.

The Gospel begins with an admission that we are sinners. Properly understood, it recognizes that anything that I do to clean myself up is like taking a bath with toilet water. It begins with repenting from my works and trusting in Christ’s work. I think this first aspect of the Gospel is one that believers forget far too quickly. What’s strange is that having begun by the Spirit we somehow communicate to young people that we are being perfected by the flesh. Paul called that foolishness.

“Are you so foolish? Having begun in the Spirit, are you now being made perfect by the flesh?” -Galatians 3:3

The first step in bringing young people back to church is the first step of the Gospel: We have to admit that all of our effort IS the problem. All of our gimmicks, all of our processes, and all of our self-righteousness are the problem, and we desperately need to turn to Jesus Christ for help. Not only do we need to admit this, but we need to admit this TO THEM. I think one of the things young people rarely see in the church is the process by which failure in the church is mended through reliance upon the Gospel and the person and work of Jesus Christ. They rarely see repentance. Instead, they see adults pretending to have it all together when, in fact, they know Monday Christian doesn’t have it all together.

If we ever hope to bring young people back into the church, we have to show them the real life emotional process by which we struggle, fail, make mistakes, and come back to Christ. We have to show them repentance and reliance on Christ daily. We need to show them our tears, our hurts, our frustrations, and our pains, and show them how Jesus Christ infiltrates our lives in the best and worst moments in life. This is not done in a lesson, or in a sermon. It’s done when the car breaks down, when mom and dad divorce, when we lose our job, and when we sin right in front of them. They need to see that we face the very same struggles they face, and they need to see Christ become the solution in our lives.