Resurrection: The Most Ignored Article of the Faith

How many times do we as Christians talk about “going to heaven when we die?” That’s the hope, right? When we die, we get to go to heaven and be with Jesus. We leave this earthly world forever and spend eternity with God in heaven. In other words, I am but a stranger here, heaven is my home.

And this is all true to an extent. It’s true to say that we go to heaven when we die. But that’s not the end of the story. Our ultimate hope is not a disembodied existence as a spirit being in the clouds, but our hope is that when Christ returns at the end of time he will raise all of us up in our bodies. He will remake our bodies to be perfect and imperishable (1 Cor 15:53). Then we will live with him forever in our newly resurrected bodies in God’s creation as it was always meant to be. Yes, in the meantime between our death and Christ’s return our spirit goes to be with God in heaven (Eccl 12:7 and Phil 1:23). But that is a waiting period for the real thing. We are not made to live in heaven, but we are made to live on earth, the new earth which God will recreate at the end of the present age (Isa 65:17 and Rev 21:1).

I remember when I myself first really understood this teaching for the first time. I was in high school. I had grown up in the church and had gone through confirmation but didn’t really understand that the Christian hope of eternal life is an eternal life in our bodies on earth, not as mere souls in heaven. For me it clicked when a teacher I was listening to pointed out that God’s design for creation was physical. God did not create us as spirits in heaven. We are not angels. He created us as creatures that have both bodies and spirits (Gen 2:7). Furthermore, it’s not a good thing when at death our bodies and souls become separated. This is not part of God’s design for creation. The resurrection of the dead, when God restores our bodies and souls back together restores life as it was in the Garden. The Christian story is at its core a story about God restoring his creation to be what he created it to be. It would be ridiculous if God were to give us an eternal existence less than the one he initially created. God created us with bodies to live on his earth and so he will restore us with new bodies to live on his new earth.

When I was serving as a camp counselor I remember I would often make sure that one of my Bible study days was focused on the resurrection. We’d talk about John 11 and the resurrection of Lazarus. I’d point to Jesus’ conversation with Martha toward the beginning of the story. Jesus reminds her that her brother will rise again, to which she responds, “I know he will rise again on the resurrection on the last day.” Martha knows about the resurrection. After all, God gave the prophet Ezekiel in the days of the exile the vision of the valley of dry bones. He is told to prophesy over the bones and in his vision the bones come back together and are covered with flesh and skin and have the breath of life breathed into them. God showed all of this to Ezekiel to teach them the following message:

Martha knows about all of this and she trusts that God will be faithful to his promise on the last day. What she did not know was that Jesus was going to give her and her brother a brief foretaste of that resurrection. In order to demonstrate that Jesus is himself the resurrection and the life, Jesus raises his friend Lazarus from the dead. It’s like a preview of what God promises to do at the end of time for all of his people.

Whenever I would go through all this, there were kids who had grown up in the church, who were otherwise well catechized and such, but had never really heard this teaching. They knew something about it, but they had never really had it explained to them like this. Even seventeen and eighteen year old kids who otherwise knew their doctrine and knew their bibles pretty well were relatively unfamiliar with this teaching.

But this isn’t some obscure point of bible trivia; it’s a central part of the faith. I remember hearing back from a grandmother of one of the kids that I had had in my cabin and she told me how when this fourteen year old kid was in the car home from camp and his mom asked him what his favorite thing from camp was, he didn’t respond with a game we played or going on the river or something like this. The first thing he talked about was when I taught them about our hope of the resurrection. It had been rattling around in his head for days. He couldn’t get his mind off of it. And I believe that this is because of how valuable a teaching this is for the church and our lives on this side of the second coming of Christ.

So in summary I’d like to point out just a few of the reasons why I think this doctrine needs to be talked about and highlighted in our teaching:

1. It recognizes that our bodies are God’s good creation and part of who we are.

Too often we pretend as if our bodies are merely our shells in which our souls reside. At death we get to shed our bodies and our souls are set free. But this is not what the scriptures teach at all. Our bodies are good. God made them after all. And our bodies are part of our identity as created creatures of God.

2. It makes the hope of eternal life more concrete and understandable

Obviously in this life we cannot understand the beauty of life in the new creation. But understanding that we will live our lives in our bodies in a perfected earth is more understandable than cartoonish notions of eternal choir practice in the clouds. The cartoon depiction of heaven honestly kind of sucks. But the real understanding of the resurrection is awe-inspiring. It’s life as it was always meant to be.

3. It takes into account the entire Christian narrative from beginning to end and gives history a goal/end.

In the Christian narrative, time does not keep running on and on to infinity, but there is a goal or end to history. Everything is waiting with eager expectation for Christ, the king above all kings to come again in his glory. We wait for God to make good on his promises to his people. The fact that the world is overrun with sin and suffering is not the way it is supposed to be and God has promised to do something about it. He will one day end all of the suffering and put things right. The cartoonish understanding of merely going to heaven when you die doesn’t really have anything to say for the continued existence of suffering on earth. People just continue to suffer until they die and hopefully go to heaven.

In our day and age when the message of Christianity can so easily be diluted by everything else we hear from the world, it is essential that we are clear and specific about what exactly our hope is and what exactly God has promised us. Christianity is not a vague feel-good therapeutic self-help program. Christianity is far more robust and far better than any of that drivel. It’s about the God who gives us life. 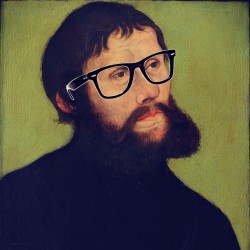 Hipster Lutheran
Lutheranism, because Calvinism and Arminianism are too mainstream. Lover of dead languages, puns, coffee, whiskey, and confessional theology. Currently a seminarian studying to be a pastor. Follow him on Twitter at @hipsterlutheran.