“Great is our Lord, and abundant in power; his understanding is beyond measure.” – Psa 147:5 ESV

Great is our Lord. Our Lord and King is great—magnanimous, infinite, inconceivably glorious. None can describe his majesty, or reckon up the number of his excellencies. And of great power. Doing as he wills, and willing to do mighty deeds. His acts reveal something of his might, but the mass of his power is hidden, for all things are possible with God, even the things impossible with men. His understanding is infinite. There is no fathoming his wisdom, or measuring his knowledge. He is infinite in existence, in power, and in knowledge; as these three phrases plainly teach us. The gods of the heathen are nothing, but our God filleth all things. And yet how condescending! For this is he who so tenderly nurses sick souls, and waist to be gracious to sinful men. He brings his boundless power and infinite understanding to bear upon human distress for its assuagement and sanctification. For all these reasons let his praise be great: even could it be infinite, it would not exceed his due. In the building of his church and the salvation of souls, his greatness, power, and wisdom are all displayed: let him be extolled because of each of these attributes. [Spurgeon]

Great is our Lord, and of great power, “Our Lord” is our Lord Jesus Christ, the Lord of the whole earth; the Lord of his own people by creation, by redemption, by marriage, and by the conquest of his grace, and their voluntary submission to him; he is “great” in his person, offices, and grace, and therefore greatly to be praised; see Ps 145:3; and particularly his “power” is very “great”, as appears in the creation of all things out of nothing by him; in the sustaining and support of the world and all things in it: in the redemption of his people from the hand of their powerful enemies; in beginning, carrying on, and perfecting a work of grace on their hearts by his Spirit and power; and in the preservation of them unto eternal life, through a thousand dangers and difficulties: at his resurrection all power in heaven and earth were given him as Mediator; and in the latter day he will take to himself his great power and reign; and in the last day will raise the dead out of their graves;

his understanding is infinite; it reaches to all things, not to the stars of heaven only, as in Ps 147:4, but to the fowls of the air, to the beasts of the field, and cattle upon a thousand hills; to all on the surface of the earth, or in the bowels of it; and to the fishes of the sea: it reaches to all men, and to all the thoughts of their hearts, the words of their mouths, and the actions of their lives; it reaches to all things past, that have been, to everything present, and to whatsoever is to come; it includes not only the knowledge of all things that are, or certainly will be, but of all things possible, or which he could bring into being if he would; it is concerned not only with the quality and nature of things it perfectly understands, but with the quantity of them; even all things in creation and providence, which are without number and past finding out by men; and so his understanding is without number, and cannot be declared, as the word signifies. [Gill]

Answer – God is a Spirit, infinite, eternal; and unchangeable in His being, wisdom, power, holiness, justice, goodness and truth. 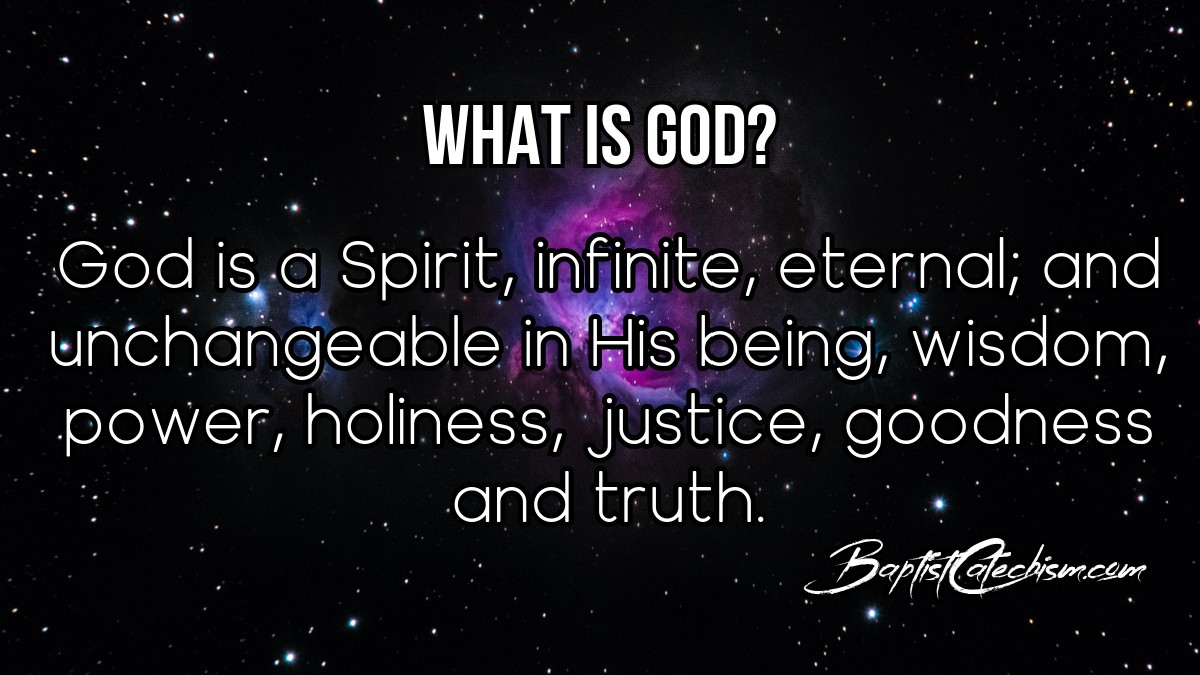 Photo by Samantha Sophia on Unsplash

Previously: Question 7c – What Is God?

I Love A Good Debate

The Couple Next Door: Called to Love

Faith in the Tornado, and the Importance of King Jesus: A Conversation with Dr. David Young

The Gospel: Simplicity and Focus

What Are the Decrees of God? – Part 2