Question 3a- How may we know there is a God?

“For what can be known about God is plain to them, because God has shown it to them. For his invisible attributes, namely, his eternal power and divine nature, have been clearly perceived, ever since the creation of the world, in the things that have been made. So they are without excuse.” – Rom 1:19, 20 ESV

Because that which may be known of God, There are some things which could not be known of God by the light of nature; as a trinity of persons in the Godhead; the knowledge of God in Christ as Mediator; the God-man and Mediator Jesus Christ; his incarnation, sufferings, death, and resurrection; the will of God to save sinners by a crucified Jesus; the several peculiar doctrines of the Gospel, particularly the resurrection of the dead, and the manner of worshipping of God with acceptance: but then there are some things which may be known of God, without a revelation. Adam had a perfect knowledge of him; and his sons, though fallen, even the very Heathens have some notion of him, as that there is a God; and by the light of nature it might be known that there is but one God, who is glorious, full of majesty, and possessed of all perfections, as that he is all powerful, wise, good and righteous:

and this is manifest in them, or “to them”; by the light that is given them: it is light by which that which may be known of God is manifest; and this is the light of nature, which every man has that comes into the world; and this is internal, it is in him, in his mind and conscience, and is communicated to him by God, and that by infusion or inspiration; see Job 32:8;

for God hath showed it unto them; what may be known of him by that light; and which is assisted and may be improved by a consideration of the works of creation and Providence.

For the invisible things of him, Not the angels, the invisible inhabitants of heaven: nor the unseen glories of another world; nor the decrees of God; nor the persons in the Godhead; but the perfections of God, or his “properties”, as the Arabic version reads it; and which are explained by “his eternal power and Godhead”: these,

from the creation of the world are clearly seen; this is no new discovery, but what men have had, and might, by the light of nature, have enjoyed ever since the world was created;

these being understood, in an intellectual way, by the discursive faculty of the understanding,

by the things that are made; the various works of creation; all which proclaim the being, unity, and perfections of God their Creator,

so that they are without excuse; the very Heathens, who have only the light of nature, and are destitute of a revelation, have no colour or pretext for their idolatrous practices, and vicious lives; nor have they, nor will they have anything to object to God’s righteous judgment against them, or why they should not be condemned. [Gill]

“The God who made the world and everything in it, being Lord of heaven and earth, does not live in temples made by man” – Act 17:24 ESV

God that made the world, and all things therein, In this account of the divine Being, as the Creator of the world, and all things in it, as the apostle agrees with Moses, and the rest of the sacred Scriptures; so he condemns both the notion of the Epicurean philosophers, who denied that the world was made by God, but said that it owed its being to a fortuitous concourse of atoms; and the notion of the Peripatetics, or Aristotelians, who asserted the eternity of the world; and some of both sects were doubtless present.

Seeing that he is the Lord of heaven and earth; as appears by his being the Creator of both; hence he supports them in their being, and governs all creatures in them by his providence.

Dwelleth not in temples made with hands; such as were the idol temples at Athens; nor in any other edifices built by man, so as to be there fixed and limited; no, not in the temple at Jerusalem: but he dwells in temples that are not made with hands, as in the temple of Christ’s human nature, in which the fulness of the Godhead dwells bodily, and in the hearts of his people, who are the temples of the Holy Ghost. This strikes at a notion of the Athenians, as if God was limited, and circumscribed, and included within the bounds of a shrine, or temple, though it is not at all contrary to his promises, or the hopes of his own people, of his presence in places appointed for divine worship, but is expressive of the infinity and immensity of God. [Gill]

Answer – The light of nature in man and the works of God plainly declare there is a God; but His Word and Spirit only do it fully and effectually for the salvation of sinners. 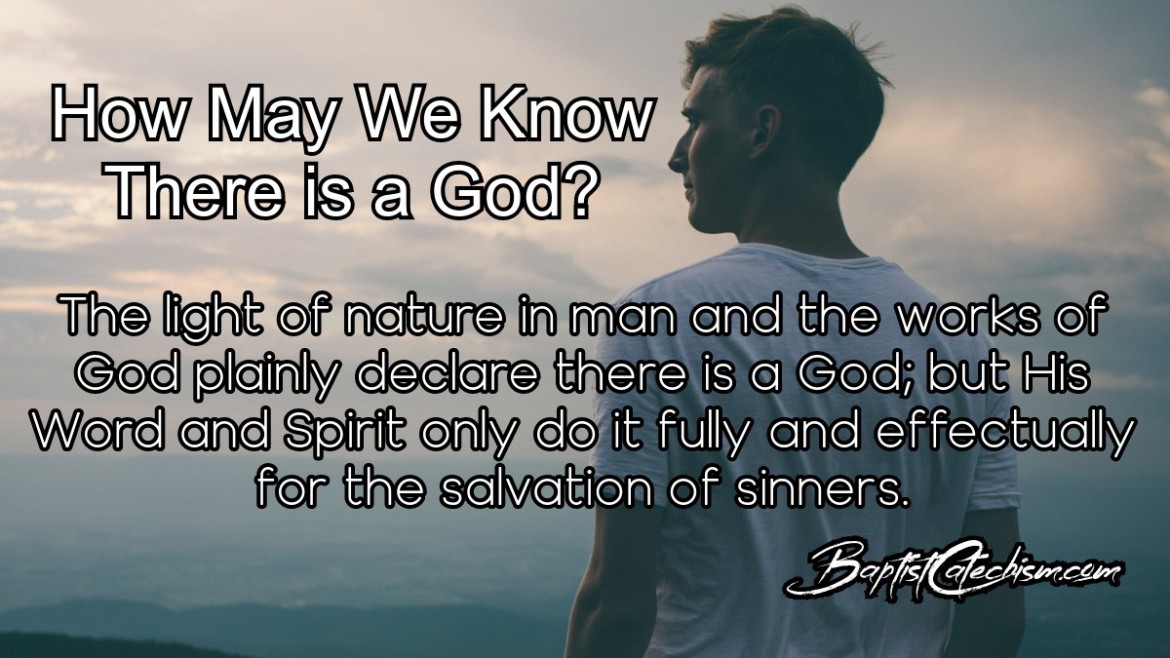 Photo by David Beale on Unsplash

The Most Reluctant Convert: A Conversation with Max McLean about His Faith and the C.S. Lewis Movie

How I Know He Lives