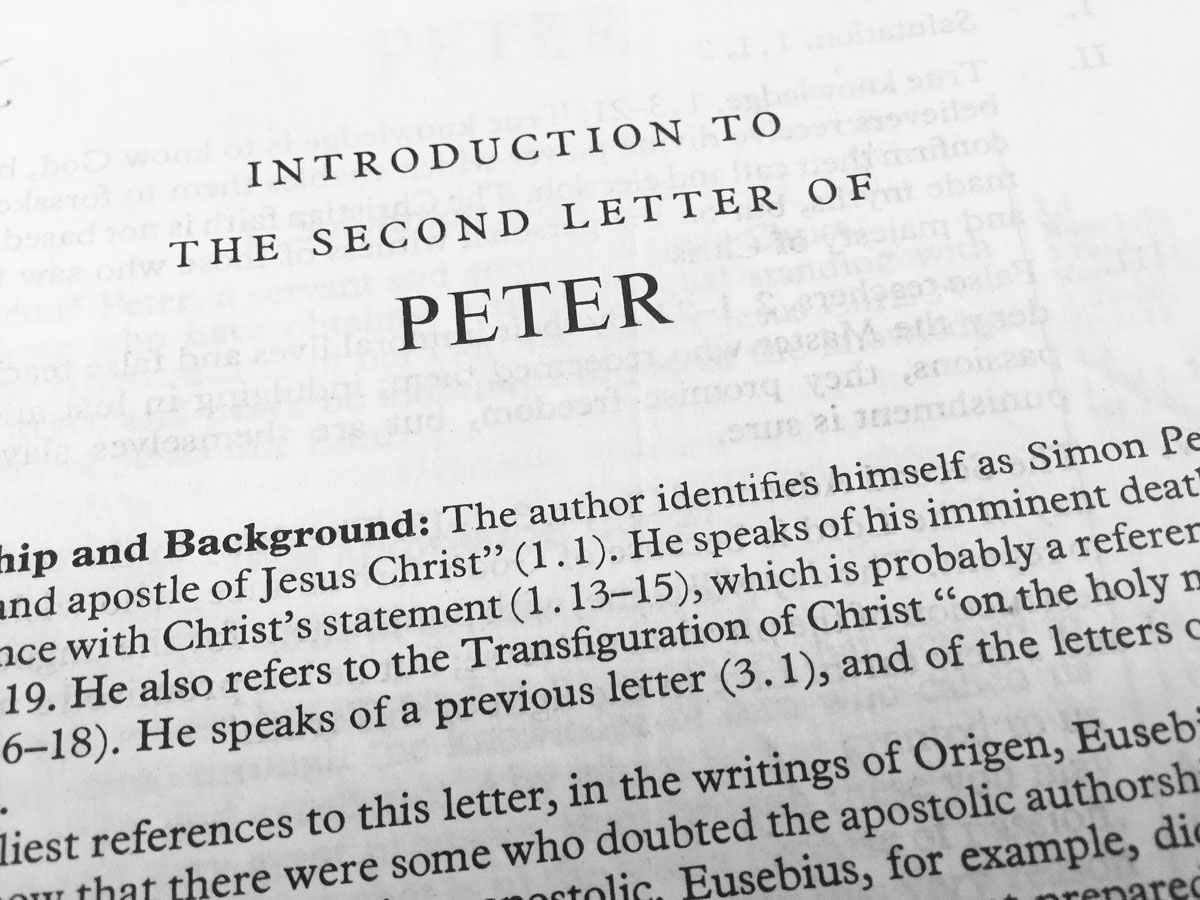 The Authorship of Second Peter

The Authorship of Second Peter

The New Testament book of Second Peter presents a number of issues that are related to its authorship and, secondarily, to its canonicity. Regarding authorship, there is a significant weight of evidence that suggests that Second Peter was not written by the apostle. “The authenticity of 2 Peter is widely disputed” writes Van Houwelingen, “In fact, the vast majority of contemporary scholars are convinced that this epistle cannot have been written by Peter himself.”1 Arthur Patzia writes, “Even an elementary study of 2 Peter introduces us to a bewildering number of theories regarding authorship, date and composition.”2 Moo and Carson write, “…most modern scholars do not think that the Apostle Peter wrote this letter. Indeed, for no other letter in the New Testament is there a greater consensus that the person who is named as the author could not, in fact, be the author.”3 Kruger states, “It was received into the New Testament canon with hesitation, considered second-class Scripture by Luther, reluctantly accepted by Calvin, rejected by Erasmus, and now is repudiated as pseudonymous by modern scholarship.”4

This first issue must be discussed separate from the issue of canonicity, but is not altogether disconnected from it. The question of authorship naturally leads to the question of canonicity. Namely, does a book that is not written by an apostle have any place in the canon? If it does not, should Second Peter be excluded from the canon or should its Apostolic authority be maintained against the weight of evidence? Arthur Patzia notes that “Guthrie opts for the Petrine alternative partially because of his negative presupposition regarding pseudonymity and his understanding of apostolicity as a criterion for canonicity.”5 If, as Patzia seems to imply, the canonicity of the book can be maintained, while relinquishing Apostolic authorship, to what degree must we insist upon the author’s connection to the apostle in order to maintain Apostolic authority? If we can say that the author is writing on behalf of the apostle, how far can we extend this principle before we must begin recognizing other books as also canonical? This [post] aims, primarily, to deal with the questions related to the authorship of Second Peter, and thereby hopefully address, in turn, the issues related to canonicity.

One of the major considerations related to the authorship of Second Peter has to do with the writing’s form. There seems to be a general consensus that 2 Peter is in the form of a testament. “The reference to Peter’s immanent death.. reveal[s] that the letter takes the form of a ‘testament.’ This form, modeled on Jacob’s final words of advice to his twelve sons… became popular in the period of Second Temple Judaism.”6 Houwelingen agrees that “…the second letter of of Peter indeed carries a testamentary character. It obviously wants to be read as the Apostle’s spiritual testament.”7 Bauckham notes that the problem with this format is that “[i]n the Jewish literature of this period, testaments were pseudepigraphal. They were attributed to OT figures long dead and were probably understood as exercises in historical imagination… This establishes an initial presumption that 2 Peter is likewise a work written in Peter’s name by someone else after his death.”8 Bauckahm concedes that it’s possible Peter could have used the form to “…write his own, real testament.”

Although the relationship between Second Peter and the testament form is generally agreed upon, there is another form that some contend ought to weigh more heavily on this discussion. Carson and Moo write “…we must not forget that the overarching genre category to which 2 Peter belongs is the letter.”9 Following this same line of thinking Houwelingen writes “… the overarching genre category to which 2 Peter belongs is the letter.”10 Further, Houwelingen isn’t convinced that the letters correlation to the testament form necessarily implies pseudepigraphy. He argues “It is very rare… that such a fictional testament is put in the form of a letter.” He goes on to argue “…in itself the genre of testament does not make a text fictional. Ellis rightly remarks that the reasoning usually followed is an invalid syllogism… It is fallacious… to draw conclusion about a particular letter form general or typical characteristics of a genre with which it may have some affinity.” 11

Finally, both Moo and Carson, as well as Houwelingen, contend that it would be incredibly strange for the early church not to reject a letter that was known to be pseudonymous. “Baum shows that pseudepigraphy was not tolerated in early Christianity where that kind of wriging was perceived as a form of deception.”12 Moo and Carson add, citing L. R. Donelson “’No one ever seems to have accepted a document as religiously and philosophically prescriptive which was known to be forged. I do not know of a single example.’”13 Bauckham anticipates this argument when he writes “Petrine authorship is a fiction that the real author does not feel obliged to maintain… In that case it must be a transparent fiction, a literary convention that the author expected his readers to recognize it as such.” 14 Still, Kruger answers this defense when he writes “If Harrison and Bauckham are correct and no one was deceived by such a device, then one wonders why it was used at all. What purpose would it serve if all who read such a document knew exactly what was happening?”15

There are number of internal issues that raise questions related to the authorship of Second Peter including, but not limited to: The apparent delay of the second coming, the affirmation of Pauline literature as Scripture, the use of strange literary style, and a situation that mirrors closely 2nd century gnosticism.

Delay of the Second Coming – One of the major issues related to the authorship of Second Peter has to do with 2 Peter 3:4 “…which indicates, in the context of raising the problem of the delay of the Parousia, that the first Christian generation (here called ‘the fathers’) has died.”16 Moo and Carson note “References to the death of ‘our fathers’… and the teaching that the parousia might be delayed for a long time betray a late date…”17 Krugar acknowledges that “2 Peter 3:4… refer[s] to the fact that first-generation Christians have died, thus pushing the date of the epistle to the end of the first century. Indeed, this verse does present some difficulties if we are to believe Peter to be the author.”18 Houwelingen contends, however, that the question regarding the “coming” is not a question from Christians but from scoffers. “These words bring me to the observation that the scoffers called the old promise of the coming of YHWH into question. So, here we are concerned with the promise made by the Old Testament prophets not with Christ’s promises to come again.” He goes on to explain that “’the fathers’ refers almost without exception to the Old Testament forefathers.”19 In support of this very position Kruger writes “…nowhere else in the NT or in the Apostolic Fathers is oi πατέρες used to refer to Christian “Fathers,” but is consistently used to refer to Jewish patriarchs.”20 Carson and Moo agree “’Our fathers’ in 3:4 (NIV) could refer to an earlier Christian generation; but it could equally well refer – as it often does in the New Testament – to the ‘ancestors’ of the Jewish nation and especially to the patriarchs, Abraham, Isaac, and Jacob.”21

Affirmation of Pauline Literature – In Second Peter 3:15-16, the author refers to Paul’s letters and seems to compare them to the Scriptures of the Old Testament. Some scholars believe this betrays the author’s awareness of a collection of writings of Paul that we know was not established until much later. Carson and Moo write “…the author implies that the letters of Paul belong to the category ‘the Scriptures’… Some scholars think that the text implies a full collection of Pauline epistles, and such a collection could not, of course, have existed during Peter’s lifetime.”22 Kruger notes “One historical problem is the reference in 2 Peter 3:16 to ‘all’ of Paul’s letters as γραφάς. Many see this pointing to a late date because all of Paul’s letters were not in circulation nor were they considered as a corpus of γραφάς until after the life of Peter.”23 Houwelingen addresses this issue when he writes that “the writer of 2 Peter does not hold an elaborate concept of inspiration. He merely refers his readers to the wisdom given to Paul.”24

Moo and Carson take a slightly different approach. Rather than deal with the hypothesis that the author of second Peter is referencing a collection of writings they focus on the authority which the Apostles recognized they had. “How early were New Testament books considered to be canonical? We cannot be sure. But we do know that the apostles considered their own words to carry an authority tantamount to Scripture.” Kruger takes a similar approach to Houwelingen when he writes “However, we have no need to understand “all” in 3:16 as referring to anything more than all the letters of Paul that were known to Peter at the time the epistle was written.”25 It appears based on these challenges that one should not assume that the author have an elaborate view of canonicity nor that he have a compiled version of Paul’s letters.

Use of Strange Literary Style – Finally, it has been suggested that the vocabulary of second Peter is so different from that of the rest of the New Testament, and even first Peter, that it could not have been written by the apostle Peter. Carson and Moo demonstrate well the gravity of this issue. “The vocabulary is different from anything found elsewhere in the New Testament: fifty-seven words are not found elsewhere in the New Testament, thirty-two of which are not in the LXX either… The style is repetitive and somewhat cumbersome, ‘pretentiously elaborate,’ as Kelly puts it.”26 Citing similar statistics Houwelinger writes “When reading 2 Peter in Greek, one will soon encounter the complexity, unusual style, syntax and vocabulary used. Kraus, for instance, counted 56 hapaxes in this letter. Half of them do not occur in the Septuagint either. Half of the remainder of these words are unknown in Jewish literature. Three words are not found in any other Greek text at all.”27

There is no doubt that there are many challenges regarding Peter’s authorship of Second Peter. That said, the challenges are not insurmountable. As this paper demonstrates there are logical, reasonable, scholarly answers to the major questions that face the authorship of Second Peter. To be sure this paper is not exhaustive and there are other issues related to this discussion such as the historical difficulty of the early church to accept the book as canonical and the relationship between this book and the book of Jude.

Still, even these issues have credible answers. In defense of the book’s Petrine authorship, first, is that it claims to be written by Peter. To be sure, this is no guarantee of Peter’s authorship but it is a strong reason to believe Peter had something to do with its writing. Further, while early church history is not altogether secure in its support of 2 Peter’s inclusion into the canon, ultimately the second epistle of Peter was deemed to be canonical and written by the apostle. Whatever challenges have been leveled against this position must be conclusive enough not only to demonstrate that Peter could not be the author, but that Petrine influence wasn’t substantial enough to support its canonical status. Since the challenges raised against Petrine authorship are only enough to raise doubt, and not enough to lead to any certainty we must conclude that while there is some doubt, Peter was likely the author of this book. Further, even if Peter was not the author of the book, it’s canonical status does not appear to be in danger even if the doubts regarding Petrine authorship are proven to be accurate.