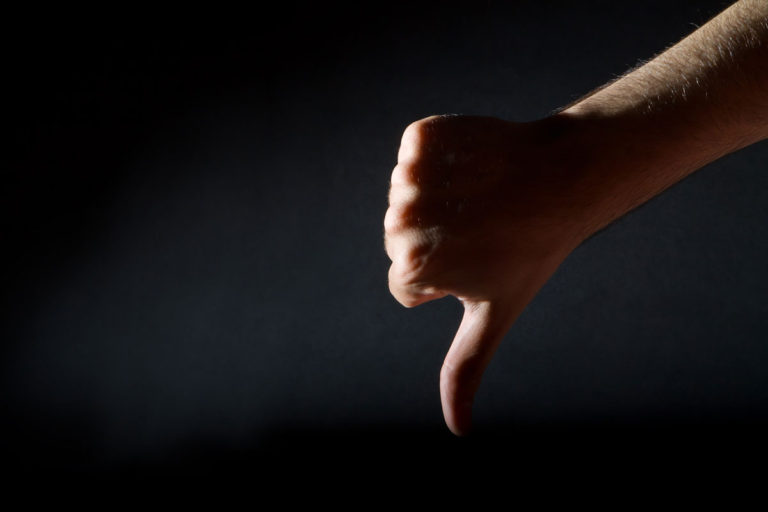 Dear God, You’re Such a Disappointment

Today we’re looking at the story of Jesus through the Gospel according to Luke, the third book of the New Testament. What’s cool about today is that we actually get to launch into the story—and who doesn’t love a good story?

In the days of King Herod of Judea, there was a priest of Abijah’s division named Zechariah. His wife was from the daughters of Aaron, and her name was Elizabeth. Both were righteous in God’s sight, living without blame according to all the commands and requirements of the Lord. But they had no children because Elizabeth could not conceive, and both of them were well along in years.

First of all, take notice that both Zechariah and Elizabeth were considered righteous people. They are God-fearing, doing everything they are supposed to be doing. Sometimes we see people who make a big deal out of how righteous and holy they are. You know the kind—“Look at me! Let me tell you how spiritual I am!”

But Zechariah and Elizabeth aren’t like that. They are genuinely upright people. In a world where so many people are righteous for show it’s refreshing to see people who are authentic and living right without calling attention to themselves for doing it. So one day…

When his division was on duty and he was serving as priest before God, it happened that he was chosen by lot, according to the custom of the priesthood, to enter the sanctuary of the Lord and burn incense. At the hour of incense the whole assembly of the people was praying outside. An angel of the Lord appeared to him, standing to the right of the altar of incense. When Zechariah saw him, he was startled and overcome with fear. But the angel said to him:

Do not be afraid, Zechariah, because your prayer has been heard. Your wife Elizabeth will bear you a son, and you will name him John. There will be joy and delight for you, and many will rejoice at his birth. For he will be great in the sight of the Lord and will never drink wine or beer. He will be filled with the Holy Spirit while still in his mother’s womb. He will turn many of the sons of Israel to the Lord their God. And he will go before Him in the spirit and power of Elijah, to turn the hearts of fathers to their children, and the disobedient to the understanding of the righteous, to make ready for the Lord a prepared people.

“How can I know this?” Zechariah asked the angel. “For I am an old man, and my wife is well along in years.” The angel answered him, “I am Gabriel, who stands in the presence of God, and I was sent to speak to you and tell you this good news. Now listen! You will become silent and unable to speak until the day these things take place, because you did not believe my words, which will be fulfilled in their proper time.”

Meanwhile, the people were waiting for Zechariah, amazed that he stayed so long in the sanctuary. When he did come out, he could not speak to them. Then they realized that he had seen a vision in the sanctuary. He kept making signs to them and remained speechless. When the days of his ministry were completed, he went back home. After these days his wife Elizabeth conceived and kept herself in seclusion for five months. She said, “The Lord has done this for me. He has looked with favor in these days to take away my disgrace among the people.”

Darrell Bock laughingly points out that the angel Gabriel’s response is:

“You don’t believe? Now you just be quiet and watch God work!”
Tweet this

That’s a pretty good way of looking at it.

And God does EXACTLY what he says he’s going to do.

We’re going to have some reflection and response time. We have two songs that connect thematically with what we’ve been talking about. Think about the message and focus on the words of the songs.

Our first song is called Blessed Be Your Name. The idea is simple and comes from the Bible: In the good times and bad times, I will still choose to respond well and praise God. The bridge declares ~

As you listen, think about the good times AND bad times in your life—the blessings and the disappointments. What is your natural response to disappointment?

Ask yourself, “Can I choose to worship God despite life’s disappointments?”
Tweet this.

We can choose to worship no matter what we go through because our response to God does not rely on our life circumstances. The apostle Paul once had a physical ailment—he called it a “thorn in the flesh.”

We’re not exactly sure what it was but he says he asked God repeatedly to take it away. God’s answer was, “My grace is sufficient for you. My power is perfected in weakness.”

This is the theme of our second song. The songwriter says, God remember us, remember your promise—even still, your grace is enough:

No matter what we face, the grace of God is sufficient for our lives.
Tweet this.

For reflection:
– Have I been righteous in the eyes of God? (if not, what do I need to do differently?)
– What undeserved disappointments have I faced in life?
– How can God work in my life in spite of my disappointments?

Making it real:
– This week, pick two disappointments you’ve faced and ask God to use you for his purpose in spite of them.
– Share your disappointments with a trusted friend. Then share the hope you have that God will move in your life even though you face disappointments.