The Screwtape Letters: Its Impact and An Overlooked Weapon Revealed

C.S. Lewis was a relative unknown when the first letter from the demon Screwtape was printed in a small Anglican magazine seventy-five years ago in 1941. A half-dozen years later, his face graced the cover of Time magazine. Then three years later, The Lion, the Witch, and the Wardrobe was published. Can you believe they did a feature story about Lewis before the world had ever heard of Aslan? The average person on the street so strongly associates Lewis with Narnia that it can be difficult to get them to think of him as more than a children’s author.

Why was Lewis in Time in 1947? While he had written a new book (Miracles), the picture on the cover gave the undeniable clue. A devil was standing on one shoulder and an angel’s wing was over the other. Just how popular was The Screwtape Letters when the book version came out after the correspondence to Wormwood was serialized? The first edition sold out before it was release and it was reprinted eight times the year it debuted!

I’ve personally enjoyed The Screwtape Letters ever since it was the second book by Lewis I ever read over thirty-five years ago. If you’ve read it then you recall how foolish Wormwood seems in his first assignment to ruin his patient’s life. Time after time Screwtape instructs his nephew in the finer aspects of temptation and yet, in the end…well, you know how it concludes, right? If not, then you need to read it again. Even if you do know, why not pick the book up one more time?

As you read it, pay careful attention to something Screwtape reveals and mentions in one form or another in nearly all of his letters. It is in the fourth letter where the clearest mention of this often overlooked weapon is revealed. You can find a complete list of the mentions in my recently released book entitled C.S. Lewis Goes to Hell: A Companion and Study Guide to The Screwtape Letters. What follows is an expansion of some of the material found in my book.

The common belief is that one of the main jobs demons have is to put bad thoughts into our minds. They whisper in our ears to suggest things we shouldn’t do. However, even a casual read of the fourth letter from Screwtape reveals the opposite as the devil’s preferred method. At the end of the second paragraph, he admits “our best work is done by keeping things out” of a person’s mind.

Lest you think this is an isolated comment, read closely remarks made in other letters that backup this admission. In fact twenty-four of the thirty-one letters, plus the follow-up essay “Screwtape Proposes a Toast” refers to, or at least implies this overlooked weapon. Space doesn’t permit me to go through each letter (you can buy my book to get the list and other helpful aids to studying this classic work from Lewis), so what follows are details on the first three letters.

In the first letter, Wormwood is told about the need to confuse his patient about “Real Life” and what it means, or doesn’t mean. Screwtape wants the patient to consider it to be whatever happens to catch his fancy at the moment. Specifically, he advises Wormwood to “teach him to call it ‘real life’ and don’t let him ask what he means by ‘real.’” Thus, the “keeping out” is to prevent him from questioning the material world and keeping him from considering there is more to life than what one sees.

In the second letter, the concept is suggested several more times. The first two are related to how the patient views what a Christian should look like. “Never let it come to the surface; never let him ask what he expected them to look like.” And then, immediately after this sentence, he states, “Keep everything hazy in his mind…” All this will make it is so the patient is disappointed or confused when he meets others who are Christians.

Later in the letter, Screwtape builds on the idea by stating:

All you then have to do is to keep out of his mind the question ‘If I, being what I am, can consider that I am in some sense a Christian, why should the different vices of those people in the next pew prove that their religion is mere hypocrisy and convention?’

Directly after these remarks Wormwood is told, “You may ask whether it is possible to keep such an obvious thought from occurring even to a human mind.” He is told that if the patient is handled correctly, then “it simply won’t come into his head.”

Finally, in the third letter, there are two more places where the “keeping out” method is suggested. In the second paragraph, Screwtape instructs that the patient can be kept from growing in his faith if Wormwood can “keep his mind off the most elementary duties by directing it to the most advance and spiritual ones.” This means not accepting the fact that sometimes exercising one’s faith in a simple way is all that is needed.

In the next to last paragraph, the focus is on the relationship between the patient and his mother. Specifically, the issue is how to create more tension amongst them. Wormwood is told he needs to have his patient focus on things he doesn’t like about his mother and “never let him suspect that he has tones and looks” that also irritate her.

Of course if you carefully consider each of the examples given in this piece, you will likely discover just how the enemy of your soul is trying to make your life more difficult. I trust that as you read or re-read The Screwtape Letters, looking out for more instances of this method, you will be better prepared for the spiritual battle in your own life. 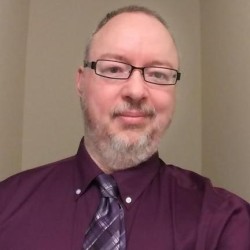 William O'Flaherty
William O’Flaherty runs EssentialCSLewis.com which features the All About Jack podcast that frequently spotlights authors of books related to Lewis. In 2016, his first book C.S. Lewis Goes to Hell: A Companion and Study Guide to The Screwtape Letters was published. ScrewtapeCompanion.com is a website to support the book. Follow him at @EssentialLewis.

Devotions from Psalms Series: Safe in the Shelter