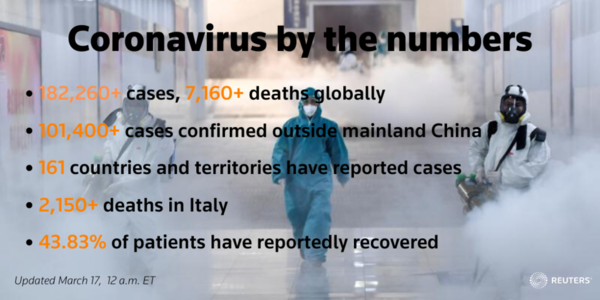 Facing A Pandemic with Faith

These are extraordinary times.

The Coronavirus pandemic is about the only thing being talked about or reported in the news. No more stories of conspiracies or political correctness. No, these things are not preoccupying the minds of many. People around the world are watching daily updates about this horrendous disease and taking the most extreme steps to avoid it, and much of the world is in lockdown because of it.

But we have yet to see its full impact. People are afraid. Panic buying and stockpiling, fights over paper goods, with fear and defeat seemed stamped on the faces of the majority. What is happening is shocking and unbelievable! How then should we approach this and not be afraid?

What is our special responsibility in such days? Above everything else, we are to be the people of God, bearing witness to the  Kingdom, and living before our neighbors as those whose citizenship is in heaven, not on this earth.

History reminds us that the world has been through such things before, even much worse, and come out victorious. In the 14th century, the Black Plague ravaged Europe with astronomical casualties. But there were many in one group of people who managed to escape much of it—the Jews. Due to the anti-Semitism of their time, they were blamed for the Plague, and further persecuted. However, paying careful attention to their Torah (the first five books of the Old Testament), they scrupulously followed God’s instructions on cleanliness. By washing themselves thoroughly, and cleansing their eating utensils, they were able to prevent sickness and death. This only increased hostility towards them.

The Jews didn’t know why they were spared; the germ theory of disease was not widely known or accepted. But they were sure of one thing, the words of God should be followed, and God’s commands were to be obeyed at all costs, and without challenge.

There is something we can learn from them. We have very clear instructions from both Testaments, that, as Christians, we are to be completely trusting in our God, and that we are to be free from panic and fear.

There’s no place for such things in the Christian life. In the Gospel of Matthew, Jesus directly commanded us, “Therefore do not be anxious about tomorrow, for tomorrow will be anxious for itself. Sufficient for the day is its own trouble.”

Of course, it’s a command, like all his great commands, that can be kept only as we “abide”—dwell, rest confidently—in him (John 15:5). We can do nothing on our own steam. The apostle Paul affirms that because of Christ we are to be anxious about nothing, because Jesus will keep us in the peace of God (Philippians 4:4-7).

We’re expected to follow the words of Jesus with the same eye to detail as the Jews did with their Torah, to draw from his strength and power, and through this to bear witness to a very fearful and panicked world. They are supposed to look to us and see what fearlessness looks like. We are to stare down disease, war, and even the fear of death itself.

We don’t know what God is up to in allowing this disease to spread across the world so rapidly, but we can be sure that he wants us to be the light shining on a hill to a world that has no such hope as ours. If there ever was a time to be real Christians, as part of a real church, and to light up the world illustrating the Kingdom of God, this is the time.

What does this fearlessness look like? To discard the guidelines established by the best medical minds?

No, instead, keeping their instructions in mind, let us heed the call to be hope to the hopeless. Let each of us go to prayer for our neighbors, and to seek the  extraordinary power to be fearless, and to be given to the welfare of others over ourselves. If the world needs it right now and if they see it in us right now, they, too, will never forget it and may turn to Christ in their time of pain and sorrow.

To hear the audio, click here: Know God, No Fear: Facing A Pandemic with Faith