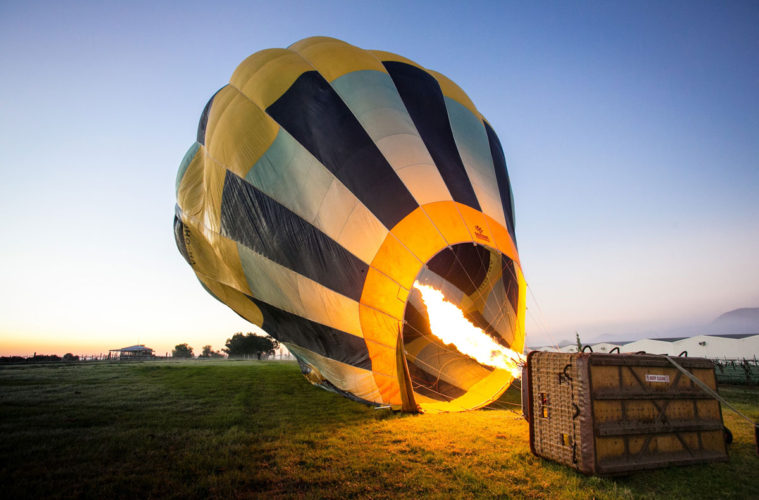 Giving Up on Being Good

Most people’s idea of “goodness” is just a bunch of hot air!

Ever try to blow up a raft? Unless you’ve got one of those electric “blow dryer thingies,” you are in for a world of hurt.

I remember sitting in the sand, ready to pass out, while my preschool daughter jumped up and down yelling, “Daddy, hurry up!” Not what I consider family fun. But, then again, I’m the guy at the beach sitting under the huge umbrella with a towel over my head, while my wife luxuriates in the sun.

As a kid, I never understood why the balloons I blew up never rose to the sky the way the balloons at the fair did. Kids don’t understand that fairs and circuses have “special air” that kid lungs don’t possess. When I got a little older and discovered the word “helium,” I understood…and felt a little stupid.

Funny thing about helium is, when your balloon pops, the air keeps floating on up through the atmosphere. It doesn’t stop going “up,” even after the balloon is long gone. That’s some special air, there.

Trying to be a good person is a bit like blowing up a balloon, only to have it plop to the ground under the weight of your own carbon dioxide.

I know lots of people who are pedaling as fast as they can, trying hard to “be good.” All I can say is that, for me, trying to be good has never worked.

You know what? The people who are trying hard aren’t any good either. Yes, they go to your church, sing in the choir, and take up the offering. You find them outside church, too. They volunteer, pick up trash, hand a $20 to the guy holding the sign at your interstate exit ramp. Their photos are on the pages of your local newspaper—bidding at some recent charity auction, donating large sums while smiling for the camera.

In a sense, I guess everyone wants to think they are good. No one wants to be bad, unless they’ve determined that because of repeatedly failing they have no other choice. And then, they rebel and “embrace their dark side,” but it’s only because they’ve faced the reality that they can never be “good enough.”

I’ve noticed a pattern in people who decide to be good. They try, try again, but harder each time…and eventually fail.

Sorry, but that’s human nature. As much as it would shock Oprah, people are not really inherently good—we are naturally selfish. Sure, we’ll call 911 if someone’s dying by the road side.  But regular, everyday common kindness? Not so much.

I went to a car show downtown one weekend. It was a wonderful event, but it attracted some of the rudest people on earth…oh, and me, too (completely unrelated, I’m sure!).

As I walked down 5th Avenue, people walked directly into my path, without apologizing or even blinking. People walked in front of me and stopped dead in the middle of the sidewalk, causing me to nearly fall trying to keep from falling over them. Others shouted into my face trying to reach friends across the street, as if I existed in a completely different dimension indistinguishable to the human eye. For a guy weighing in at 250 pounds, I have never felt so invisible.

After people fail at being good, they do one of two things. They either give up and give in to selfishness…or they decide to simply “fake” it.

They throw themselves into “good” actions, but not because they’re acting out of compassion. They are desperately trying to flag down God, and anyone else, to get their attention. They want God—or at least somebody—to recognize how “good’ they are.

Without fail, they ignore one little problem. God sees the heart. He sees not only what we do, but why we do it. And all our posing and posturing makes little impression on him. In fact, he says, “Enjoy your moment in the spotlight, because that’s all the reward you’ll get.”

However, there is a third option Jesus offered.

He mentioned it to a very “good man” named Nicodemus in John, Chapter 3 who came to compare “good person” notes with Jesus one night. Nicodemus was a religious leader, greatly respected for following even the most obscure laws of Scripture. But Jesus stunned him by saying, in effect, “Your whole life is a do-over—you need to start again from scratch!”

That’s when Jesus used a loaded term, “born again,” that we’ve heard so much, but few people understand. He said pleasing God is not something we are able to do on our own. Being good is something that happens only through a supernatural transaction taking place in your soul that God must do for you. You can never be good enough for God, but God can do good through you by his power. And this happens not because you’re “good enough,” but by surrendering your life to him.

“Surrendering my life to him?” Thanks anyway, but I’d rather do it my way and stay in control.

So we keep pedaling faster and faster, trying to reform our actions and our character. Or, we just keep pretending and hoping no one sees through us, and that God has really low standards.

What we really need is not “reformation” or “obfuscation,” but total “transformation.”

Our pride doesn’t like it when God looks past our actions to our hearts and says we are lacking. And honestly, some pastors have build some pretty impressive churches by getting people to think their donation was a ticket to heaven. But God sees our lack of true love for each other, our own overwhelming self-interest, and our arrogant expectation that a few hastily tossed coins in the plate will buy him off. Jesus says, “No sale.”

We keep blowing up our balloon, not understanding why it doesn’t reach skyward. All the while, Jesus is trying to help us see that our carbon dioxide will never do the trick. What we need to reach God cannot be produced through our own effort. It only comes from God, breathed into our lives by God Himself. We keep blowing hot air, wearing ourselves out, when what we need is spiritual “helium” to fill our lives.

Because only with that magical stuff will we ever reach heaven.

Photo by Will O on Unsplash