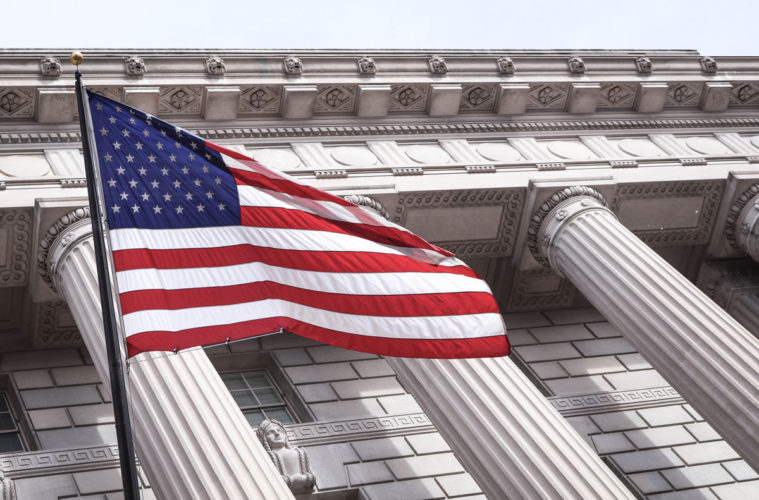 Why “Under God” Matters

During a magazine contest in 1892, the words to what we now know as our Pledge of Allegiance were first published. In 1942, the Pledge was officially adopted into our flag code. At the time, it read as follows:

“I pledge allegiance to my Flag and the Republic for which it stands; one nation indivisible, with liberty and justice for all.”

Later in 1954, after the Soviet Union had become the main opponent of the USA to freedom in the world, the words “under God” were added. Funny how our nation quickly turns back to God whenever we feel our very existence threatened.

The association of religious faith as the opponent and cure of oppression is not accidental. In fact, the Judeo-Christian ethic and communism were two competing ideologies for the hearts and souls of people in that time. And while the name “communism” has fallen out of vogue, its basic premise of “man-centered living” as opposed to “God-centered” has morphed and continued on.

Peppered all over Facebook and Twitter today are memes of the pledge without the added “under God.” They call for returning to the original version, as if the later version had been somehow polluted by time. These sing in chorus with those who’d suggest that Christian people desert their faith when entering the ballot box, and that it’s perilous when people they deem as “religious” serve in public office.

You’d think everyone before 1954 was a staunch atheist, and then Dwight Eisenhower somehow forced them all into church. I guess Billy Graham was a government operative in that conspiracy, right?

In truth, the revised pledge better reflects us as a people, with a nation open to all but founded with a Judeo-Christian premise. Instead of better representing our nation, these calls are in truth promoting a sort of revisionist history of the USA, the kind with all references to God and religious faith deleted.

It’s as if someone took the speeches and writings of our founders on pages turned amber and brown by time, and attempted to inartfully apply white-out over every religious reference. Comically, that would be quite a bit of whitewash!

This push is not only biased against religion but is simply inaccurate historically.

Like it or not, many of the founding fathers were quite religious. And while they were careful not to establish an official state religion (England had taught them the perils of that quite well), their ideology was inextricably tied to a basic Judeo-Christian worldview. One cannot sail through the founders’ “sea of ideas” very long without running aground on statements like this:

“Our Constitution was made only for a moral and religious people.” “It is wholly inadequate to the government of any other.” “The government of the United States is not, in any sense, founded on the Christian religion.” – John Quincy Adams

Adams’ premise is interesting to consider in this: if the country was truly founded as an experiment, if you will, in Christian charity and freedom, what happens when you remove that foundation? What are you left with when the foundational legs of your “house of cards” are removed?

Even founders like Thomas Jefferson, who were known as simply Deists, acknowledged our nation’s debt to Christianity. He took faith so seriously that he walked several blocks every Sunday of his presidency to attend the local Congregationalist Church. Not bad church attendance for an agnostic!

I know this kind of talk makes my secularist friends very uncomfortable. I can hear them cringing, as they jump to the conclusion I want to turn the USA into some theocracy. But that’s because they misunderstand a basic tenet of Christianity. Unlike the Crusades or the Muslim jihads, true Christianity teaches it’s wrong to force your faith on anyone. Of course, some have used religion for their own political goals, and we should always take the religious statements of politicians with a huge grain of salt.

But it is the foundational idea of Christian charity and equality that was the incubator in which American freedom could grow. It was Christian teaching that proclaimed, in spite of the opinions of kings and lords, that all people have equal value regardless of their station in life.

Seriously, name another religion that teaches that? You won’t find it in Buddhism or Islam, but it is at the core of Christianity.

It was Christian teaching that was the basis in both the USA and Great Britain for abolishing slavery. And it was Christianity which Martin Luther King Jr. referenced as the closing argument against discrimination in our country. Just try and read his Letters from a Birmingham Jail, written to white pastors, and manage to miss his thoroughly Christian premise.

Even when Christians oppose something nonbelievers love, like abortion rights, they do so on the basis of compassion and respect for the human rights of the child. What is seen as encroachment by some is actually the saving of innocent life to the baby and the Christian.

So I would say to my secularist friends who are so afraid of any politician with Christian faith, and afraid of voters whose Christianity informs their ballots: calm down, we’re the reason you still have the right to protest. As long as our nation has a basis in Christianity, you are safe. But it was when Hitler moved away from Christianity toward Nietzsche’s atheistic “superman” that freedom died. It was when socialism overtook Russia and China, forcing the church into hiding, that millions died along with their free speech.

In fact, if you truly value your freedoms, you’re in a very ironic position: you’d better hope those hostile toward Judeo-Christian beliefs stay out of power. Because when God is taken out of government, out of the public square, that is when tolerance always dies. Every time.

When the blatantly Christian idea of “free will,” which is at the heart of the Christian faith, is obliterated, you will know what true oppression is. On that dark day, the only view tolerated will be the one of whomever happens to be in power. And there will be no Christian voice left with which to fight him.

When a nation is no longer “under God,” it is no longer under his protection. And at that point, truly anything can take it under.

Photo by Brandon Mowinkel on Unsplash