Recently, I ran across a poll on Twitter that really opened my eyes to how many Christians view children in relation to sin and salvation. The poll went something like this: At what age in general do children knowingly and intentionally commit sin? Out of a poll of 298 people, the number one choice was between zero to 11-months-old. This choice won receiving 37% of the votes.

I felt some of the comments on the poll were equally as enlightening. Some suggested that children were sinful in the womb and others as young as six-months-old. While there were a wide variety of responses, I was concerned about how these thoughts affect what we think about small children and how we treat and discipline them.

As someone who has spent many years personally and professionally with children, I found this shocking and yet it gave me insight into why some parents tend to discipline their children in the manner they do. I understand some may relate their children’s behavior to their belief that we are born with a sin nature. I would like to share some thoughts based on my training and biblical understanding. I hope that even if you have a strong opinion on this topic you will at least glean some additional perspective on how childhood moral development happens. Understand I am not trying to replace a biblical view, but merely explaining how moral development works in relation to a child’s age and individual rate of brain growth and development.

While I was in school, we learned about the social, sexual, physical, and moral development of children. This is important for many reasons. A big reason is that we can measure individual kids against a general standard and see if they are behind, on track or ahead. It also helps us to know what to expect from a certain age group and how to best teach and help each person. It can help us build a better understanding of why certain events as someone was growing up affected them the way they did. In this particular article I would like to focus on moral development and the model that was set up by Kohlburg. I have posted a chart below with the general age and the development of morals to help illustrate what happens in each stage. 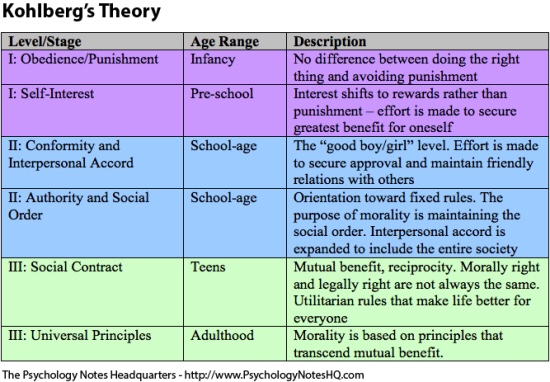 Why are his observations important when it comes to development and raising kids? Because, what if we are so busy seeing our children through our expectations and assumptions that we expect things we shouldn’t. Or, what if we discipline our kids thinking they are doing things willfully, with full knowledge of selfishness or sin, but they aren’t.

Let’s talk about some specifics.

Let’s say your child is in the infant stage (under 1), some may view their behaviors as selfish, willful, or with intent to make someone else mad. Some parents at this stage may yell, instigate time out, spank, or use other forms of punishment to try to correct behaviors. However, an infant doesn’t know or understand right and wrong or cause and affect. So I believe, if I understand the poll, they can at this stage of development do things that are willfully sinful. They are egocentric and “selfish,” but this is because they depend 100% on others for food, milk, protection, and comfort. Therefore, they have learned how to get their needs met. This is not coming from a place of being sinfulness, but rather necessity.

Toddlers: This group can look you in the face and try to do the opposite of what you’re asking them to do. They often say no, mine, can be aggressive toward others, and test boundaries. Some would view this as the age in which “willful” sin comes into play. I would disagree. Let’s talk about development. These children have moved from complete dependence to starting to understand they can say no and that they can try to exert their will over others and test those in power over them. It’s essentially the opposite of the first stage. This begins to be the development of the conscience—when children begin to grasp a concept of self verses others. It’s a learning period. In my view, a small child’s disobedience is still not a willful sin. Their brains do not yet grasp the true concept of sin and they will not be capable of that for awhile. Since the goal of this stage is to begin to learn about how they exist apart from their caregiver, the stage of “no” and “mine” are not coming from a place of sin/selfishness but rather an exploration of exerting one’s own will apart from their caregiver. This is an age where they begin to learn through experience what is expected of them from others.

The next age, school age, is in my view where the true concept of right and wrong begins to set in with kids. While I don’t believe there is a set age that one can say a child “willfully sins,” I will say that during the school years kids begin to label themselves “good” or “bad” based on their behaviors. In other words, they begin to own their actions. They may still not fully understand the concept of sin but they are beginning to understand to learn to own their actions. However, one more thing to consider is that this age group is very black in white in their thinking and their motivation is toward what is socially acceptable. This may mean they are still incapable of realizing whether they believe something because someone has taught them or whether they believe it through their own reasoning. Therefore, to me, this may still be a gray area as far as whether sin is willful.

Teens: Ah yes, the age group that often tries on new ideas and rejects those that they have been taught. They begin to think through what they’ve been taught and develop a moral compass. In my view, unless their are developmental issues at this age, sin can be, and often is, willful. Without a doubt, teens are old enough to understand why what they choose is sinful and know that they are willfully disobeying. While they may not always be able to predict the outcome of their choices, they are able to sort through what they choose and why it is something that is viewed as wrong or sinful.

I hope that in learning a little bit about the stages of moral development I have challenged you to consider what actions by children are willful sin versus a natural part of the learning process. I would like to leave you with one final example.

Have you ever considered that Adam and Eve were naked and it wasn’t a sin? Why then did they become ashamed after eating the fruit? It’s because they received the knowledge that they were naked and when they realized this, it changed how they felt about being naked. So was it a sin before they were aware of it? The answer is no. There was no sin until they became knowledgeable about what sin was. I personally believe this concept still applies today. I also believe the Bible is clear on whether children are saved or not. Matthew 18:3 tells us to become as little children or we won’t enter the kingdom of heaven. Why does it say this? It says it because little children are innocent. They are unaware of sin or the ability to realize what the consequences of sin are.

Thank you for reading my post. I hope that I have opened your eyes to a different view to consider when you see your kids doing things that need correction. As always, I look forward to your comments and feedback.

Rachael Heib
Rachael Heib is an LPC (licensed professional counselor) and is working on a certification in Play Therapy. She obtained her Bachelors degree in Psychology from the University of LaVerne, California and her Master’s degree in Community Counseling from Argosy University, Atlanta, Georgia. Rachael’s mission in life is to enrich the lives of children and adults through resolving conflicts, applying biblical concepts, and encouraging people to use their natural abilities and talents to better their lives and the lives of those around them. Rachael is married to her high school sweetheart Philipp. They have three bio children and are raising three more. They have fostered a total of five children. To learn more about Rachael, visit her website: https://musingsfromatherapist.wordpress.com/about-rachael/. You can follow Rachael at @theracuppy.