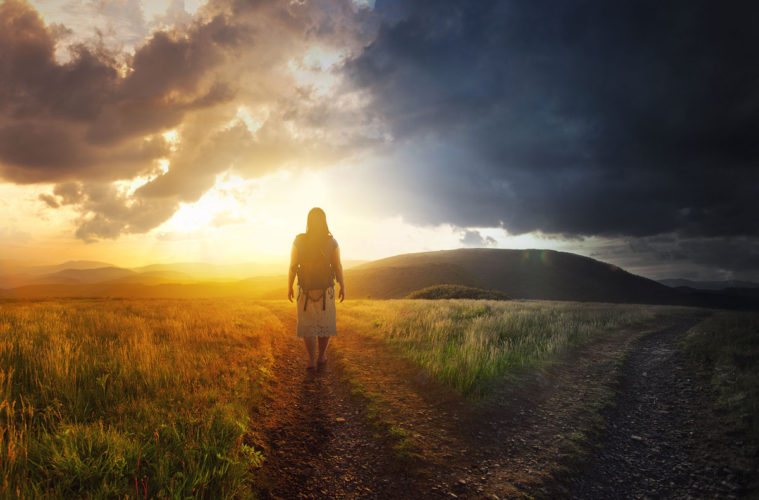 While researching on the Internet for after-death visitation reports from people who have lost their loved ones, I came across this. In her article, Visions of Deceased Loved Ones, Marianne writes:

When I was younger, and still living with my parents, my grandmother died. My mother had fallen asleep in the living room on the sofa. She awoke to see a figure in the hallway, dressed in a white nightgown. She ignored it because she thought it was me, up for some reason.

The figure went over to one of the pictures in the hallway and pointed to it.  It then walked off.

She fell back asleep, until awakened by a phone call from my grandfather. My grandmother had gotten up in the middle of the night, fallen, and died.

When my mother went home to the funeral, she found money behind the picture frame in my grandmother’s hallway, just as the dream/vision indicated. My parents were able to buy a new car that they needed with the money.

Noted Anglican clergyman, British scholar, and Bible translator J.B. Phillips produced the Phillips New Testament in Modern English in 1959. It was an early effort to put the Scriptures in easy-to-understand English for his youth group. Since that time, many have followed his lead and we have numerous translations now available to us.

I was very surprised to read in his book, The Ring of Truth (1967) about two incidents that followed the death of C.S. Lewis in 1963. For a famous and respected intellect in England to be bold enough to share such events was, at the time, highly unusual (and risky), to say the least.

Phillips wrote about C.S. Lewis’ appearances to him:

A few days after his death, while I was watching television, he “appeared” sitting in a chair within a few feet of me, and spoke a few words which were particularly relevant to the difficult circumstances through which I was passing. He was ruddier in complexion than ever, grinning all over his face and, as the old-fashioned saying has it, positively glowing with health. The interesting thing to me was that I had not been thinking about him at all. I was neither alarmed nor surprised nor to satisfy the Bishop of Woolwich, did I look up to see the hole in the ceiling that he might have have made on arrival. He was just there–”large as life and twice as natural”! A week later, this time when I was in bed reading before going to sleep, he appeared again, even more rosily radiant than before, and repeated to me the same message, which was very important to me at the time. I was a little puzzled by this, and I mentioned it to a certain saintly Bishop who was then living in retirement here in Dorset. His reply was, “My dear J…, this sort of thing is happening all the time.”

In her book, A Man Called Peter, Catherine Marshall reported a few extraordinary events that took place immediately after the death of her famous husband Peter Marshall. She saw this as an indication to her that Peter was still alive and well even though departed from the present world.

When Oxford Professor of New Testament George Bradford Caird died, Caird’s close friend and former student, spoke of two unusual events that occurred following his death. Caird and his skeptic wife Molly spent years, to no avail, trying to grow pansies on their property. And, as lifelong birdwatchers, they sought earnestly to see a live kingfisher, but never did.

To the amazement of his wife, following Caird’s death in 1984 pansies sprung up wherever they had been planted—all over their property. Not only this unusual incident, but later while his wife was standing near her kitchen window, a kingfisher suddenly landed outside, and then flew off. Both incidents gave Molly much to think about.

Having performed literally hundreds of funerals and memorial services in my pastoral ministry, I have heard many similar accounts from other Christians who experienced some sort of temporary contact with their loved ones. These events generally occurred within a few days of their loved one’s death.

The common feature of such reports is the highly personal meaning attached to each event, not just some paranormal incident without context. They appear to suggest an intimate message conveyed to the loved one, usually one of encouragement and comfort in the hour of grief, by reaffirming the ongoing life of the departed.

There seems to be granted a brief time-window when the dead tarry or delay their journey into the next world long enough to reassure their loved ones. As recently as one month ago, a family reported to me four separate incidences of such a visitation. Such occurrences don’t always happen, but they do often enough to be noted and taken seriously.

How to interpret these reports is often difficult for the conservative believer who may immediately suspect some sort of demonic action, warned away in Scripture from necromancy and any attempt to contact the dead. But what puts these reports in a different category is that no attempt was ever made to summon the dead person; rather the initiative was entirely on the other side. Also, if there is something Satanic in origin about them, it creates a problem: demonic powers are not known for trying to encourage believers in times of sorrow, helping them deepen their belief in the abiding presence of Jesus Christ.

Perhaps all we can say about such stories with any confidence is what Phillips’ Bishop said when asked about them, “My dear J…, this sort of thing is happening all the time.”

What do you think?