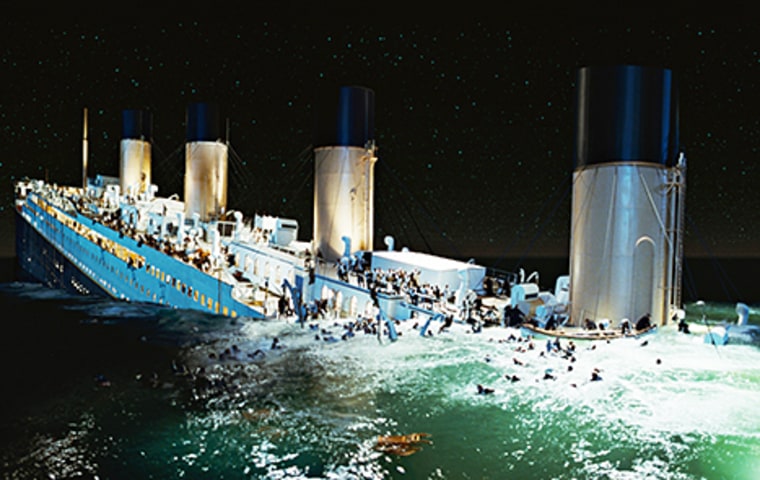 We never seem to lose our fascination with the story of the sinking of the Titanic. Since boyhood, I’ve watched all the oldest films made on the disaster, and I’m a sucker for every new version of it that comes to TV or the theater.

A while back, I was watching a special about it on PBS, leading up to the 100th anniversary of the tragic event. In it, the narrator explained that it wasn’t just about a ship, but about the people, and all the tales of heroism and cowardice that come from the event.

But in reality, it wasn’t just about the people either. Rather it was about the whole world at the time. The Titanic was more than an icon—it was an idol, because it was the physical embodiment of the unbounded optimism of the era.

The World’s Getting Better and Better

The world was just getting better and better every day, onward and upward. Humanity was taking control of its own destiny by the sheer power of their planning and engineering. Literature, philosophy, and theology all reflected the rapid rise of human glory and intelligence, and it appeared that everyone was awakening to the realization that the old biblical view of humanity’s sinfulness and depravity were on the way out. Did we even need God anymore? Remember, even he “couldn’t sink this ship.”

But when the Titanic slipped so quickly and so easily beneath the waves and disappeared forever into the freezing cold water, the world was stunned. “How could this happen?”

Yet the shocks were just beginning.

The world’s sense of optimism was shaken to the core just two years later when the nations of the world were plunged into a world war, a massive, mechanized carnage that no one could have ever imagined. Not just thousands, but hundreds of thousands perished in a single battle.

The great Titanic now was the world. The whole planet was sinking, and it seemed that nothing could be done to stop it. It was out of our control, and powers we didn’t even understand seemed to be taking charge. When the “war to end all wars” was over, we emerged a different people.

But still it wasn’t over. The rise of Communism, the Great Depression, World War II, and the Cold War followed.

You’d think that never again would we take the good days of increasing prosperity, freedom, and safety for granted. Surely we learned our lesson that God alone rules his world, and that to turn from him and to our own resources, brilliance, and greatness will always result in disaster.

Is It Getting Better?

But has anything changed since April 1912? Haven’t we forgotten God and come to trust our own ways just as thoroughly as they did then? If anything, we seem to have outdone them in the speed at which we’ve tossed overboard God’s Word, law, and sovereignty and replaced them and his kingdom with gadgets, toys, and religions of our own making.

And the church? Today it’s virtually indistinguishable from the world in general in just about any way it can be measured. So where are we and what can we expect in the coming years?

I think the Titanic continues to fascinate us because it continues to be as relevant now as it was then. It stands in our memories as the perennial warning sign to any and every society that forgets God and becomes fixed upon itself and its own capacity to reach into the heavens and bring all its glory down to the earth.

What is our Titanic today, and how long will it continue to sail on before hitting the inevitable?

Blessed is the nation whose God is the Lord.
–Psalm 34