Hurt By the Church?

I swore I would never go back.

I was the statistic. That numeric value attributed to the growing segment of Christians who lost hope in the church and were abandoning it all together.

I never intended to be the statistic but that’s where I ended up. Within one month I left the church and my job (where I worked with churches heavily) and didn’t look back. I was on a new road, one I thought was better but that I later learned was one that only fueled my hurt and unforgiveness toward the church and ultimately led me to feel the worse of all emotions…. Nothing.

My heart was callused and unable to warn me of being callused.

But God didn’t give up on me.

One evening he clearly said, “Brandon, I’m not asking you to fix my church.”

To which I responded, (frustrated, unfortunately, I must say), “Well if you fixed all these things your church would be beautiful.”

But God simply replied, “Brandon, my church is already beautiful.”

Those words stuck with me and became the catalyst for my returning to the church.

Those ten words set me free, without my even knowing it. They reminded me that if God wanted me to fix something in the church then he would give me the necessary influence and resources to fix it… But if those were not there, then I didn’t need to give them my attention, frustration, and effort.

Instead, I needed to place my effort in something much more important—learning to walk with, and remember, my Father.

That seems like such a trivial and small solution to a massive complex sea of emotions. But, at least in my life, I found this to be the most impactful and necessary step in being able to find beauty and hope in the church again.

To simply see her through my Father’s eyes, and then realize that’s how he sees me—through eyes of love, grace, mercy and forgiveness. And, if he can see me in all my ugliness that way, then, if I trust him, he will teach me how to see his church through those same eyes. The eyes of love and forgiveness that don’t see brokenness as a concrete state but as something that has been redeemed and shows his great mercy.

The “I Forgive Church” Video

So that’s where the heart of this video I leave you with comes from. It’s a summarized version of my journey from hating the church to ultimately rediscovering the hope I lost and forgiving the church.

An then returning with new hope.

I think all of us either know someone who has been hurt by the church or left altogether. That person might even be you. If so, I hope this video shows you there is hope, even when all you see is brokenness, if you are willing to walk with our Father and see his church from a different perspective.

I HATE CHURCH? from Brandon Gross on Vimeo. 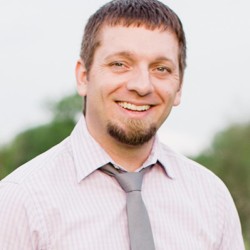 Brandon Gross
Brandon Gross is an author, photographer, and practitioner of the art of rock-paper-scissors. He has written two books: “Steps: 7 Ways I Found Hope in a Church that Appeared Hopeless” and is currently finishing, “I Forgive Church: Rediscovering Hope Lost in the Church.” For most of his life, Brandon grew up as a pastor’s kid, or “PK” for those who are in the club. His childhood consisted of a healthy dose of organ music and fellowship dinners all sandwiched in spit-slinging sermons that made the front row of a Gallagher “Smash-O-Matic” show seem dry. After spending 7 years working in the church management software industry and volunteering heavily in his local church, Brandon lost hope in the church; ultimately leaving, never intending to return. It took years but God helped him see through the brokenness and hurt in the church to rediscover the beauty that had been there all along. Brandon likes to say he was “one of those statistics” you hear about but was rescued from himself. He now spends his time writing and helping others rediscover hope in a broken church. It’s a messy but beautiful process and he wouldn’t like it any other way. You can connect with Brandon by going to www.brandongross.tv and you can download his free ebook “STEPS” by going to www.brandongross.tv/ebook. Follow him on Twitter at @brandon_gross.