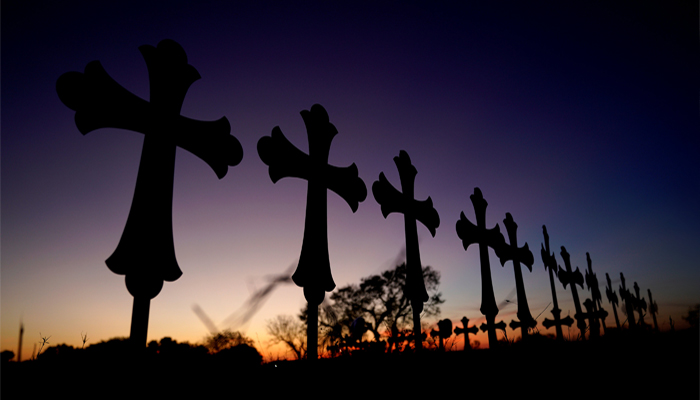 The Perils of Freedom: The Troubling Trend of Multiple-Victim Murder

Another mass shooting and more innocent victims sacrificed on the altar of a broken culture. What can be said that has not been expressed already in so many articles and speeches? For once, let’s not bother responding to the Johnny-One-Notes who immediately step up to the microphone and bark about their favorite obsession. Looking at this troubling trend of multiple-victim murder through any one singular issue is sure to end in failure. At the same time, let’s not be content to shrug and admit there’s not much we can do. We have a serious problem here and it’s not due to a lack of laws or compassion for the victims. The answer is not in walking out when they call for a moment of silence, nor is it cuing up endless “thoughts and prayers.” There is plenty of outrage to go around, but we must move from frustration to reasonable action.

Our justified indignation must be forged into motivation to embrace efficient responses that actually make a difference. But first, we must shake off this incessant state of “paralysis by analysis” by coming to some rational decisions that will result in some equilibrium—balance that will steady the boat before making the next adjustment of the sails to tack into favorable winds.

We have to own it, people!

It’s not “their problem.” It’s “our problem.” If we leave it to politicians…well, look at them! Do we really expect solutions to come from those people? No. This is indeed “our problem” and we must deal with it. We may think differently, worship differently, and choose to live diverse lives, but we all make up this society we live in and the cultural norms we follow in general.

As I’ve said before, this is a symptom of a condition with many causes. No one approach to any single aspect will do. But there are reasons why this is happening in western culture and in our nation in particular. Perhaps we can best understand it by looking at what makes our country unique. The proliferation of firearms is a contributing factor, but it’s not the main culprit. If it were, simple logic would have to take in the vast numbers of gun owners and we’d have to expect the problem to be statistically much, much bigger than it is.

Since our unique Republic was founded on personal freedoms not formerly found elsewhere in the world, perhaps we should look there. As virtuous as they are, perhaps individual rights have been misused or adulterated in a fashion that has allowed imperfections to grow like weeds that haven’t been pulled from the cracks of society’s pavement. God gave us free will and we know where that went. I’d like to suggest that the root of the problem might be in man’s ongoing challenge to manage freedom. It’s not new, but I think it has been ignored lately.

“Most people do not really want freedom, because freedom involves responsibility, and most people are frightened of responsibility.” (Sigmund Freud, Civilization and Its Discontents, 1930)

Again, it’s an age-old problem. Although we like to think of it as a virgin bride, in truth, freedom can be a serious bitch. Countless books and essays have been written about maintaining public safety and protecting personal rights simultaneously. On one hand we embrace “freedom of speech,” but then acknowledge the damage done by “hateful speech.” We value “freedom of the press,” but despise lies and blatant propaganda. The 2nd Amendment to the Constitution calls for the preservation of the right to bear arms, but no one in their right mind wants to arm a homicidal maniac. The devil is always in the excesses that emerge when we push the boundaries of liberty beyond reason and tangle ourselves in ridiculous single-minded obsessions that deny extenuating circumstances and reality itself. There are strong historical and biblical concerns for this very issue, if we bother to look.

St. Paul, aka: Saul of Tarsus, warned of such reckless use of freedom:

“For you were called to freedom, brethren; only do not turn your freedom into an opportunity for the flesh, but through love serve one another.” (Galatians 5:13)

St. Peter did as well:

Both these holy men were concerned with the potential negative consequences of unleashed passions that were not tempered by self-discipline and prudent guidance. Once the shackles of slavery are discarded and people are endowed with a sense of boundless independence, moderation often goes out the window. The sexual revolution of the 1960’s was praised as the end to puritanical oppression, but released an epidemic of STD’s, unwanted pregnancies, and millions of abortions. Even some of the most celebrated liberals lamented the decline in human dignity:

“Sexuality surrounds us like a dangerous aura. The same reverence that is given to the spirit is not given to the flesh. We have had a sexual revolution, but the sexual revolution only has made sex more pervasive. It hasn’t granted the level of reverence and respect that it should have.” (Gioconda Belli, Nicaraguan author, novelist, poet and former FSLN supporter)

We are currently reaping the harvest of a culture that has accepted, if not celebrated, violence with similar recklessness. It permeates our entertainment, saturates our streets, disrupts our schools, invades our domestic lives, dominates our news, spices up our sports, invigorates our foreign policy, and is a source of pride in subcultures that herald it as a social tradition.

No one would deny that Hollywood and popular culture have a tight symbiotic relationship that influences the collective mindset, often subconsciously. Most the time, we pay more attention to our popcorn than the subtle trends on the big screen. I invite you to stop and think. Contemporary movies habitually embrace criminality as a virtue and make protagonists out of characters that rightfully belong in jail. The milder rogues include Danny Ocean’s mob (11, 12 and 13, with a female version 8 in post-production), Thomas Crown (The Thomas Crown Affair, 1999), and Chris Farraday (Contraband, 2012). Then we turn up the violence with all the characters in The Departed (2006), Christian Wolff (The Accountant, 2016), The Howard brothers (Hell or High Water, 2016), John Wick (1, 2 and 3 on the way), and any number of characters in other films. Just the recent examples go on and on. I dare anyone to list them all. Exciting entertainment? Sure. But, the antihero isn’t just a controversial archetype characterized by James Cagney movies in the 1930’s…they’re the modern norm.

We can then bounce into the cop and war movies. Both genres are expected to be gritty by nature. But any sense of justified force is marginalized with horrifically unrealistic body counts that make a mockery of the discipline expected in our military and law enforcement. These characters shoot more bullets than I ever loaded in over 30 years in police work. Even John Wayne would leave the room. Much of the time, it’s hard to tell the “good guys” from the “bad guys.” And then, we wonder why we have trouble differentiating the two in reality. How do we expect the maladjusted mind to process this? I have long held that a society that can’t tell its villains from its heroes is undeserving of the latter.

So how do we reestablish social norms that treat violence as an option of last resort instead of the default response to indignation? Historically, we have always had problems with mental health, criminality, violent tendencies, unrepressed destructive proclivities, unbridled evil, and sin. But given the current trends, I think we need to ask ourselves how we rein in our fascination with overpowering our fellow man so that those suffering from narcissistic personality disorders and low self-esteem don’t find empowerment by hoarding firearms and fantasizing about mass murder.

Certainly, ethereal concerns such as morality need to be addressed. But in the current state of relative ethics and the sliding scale used to judge human decency, perhaps we can avoid endless debate by focusing on more tangible matters. Maybe inroads can be established if we first accentuate the advantages of moderation over excesses for everyone and emphasize those responsibilities Freud pointed out that come with the freedoms we treasure—before we lose them to hysteria.