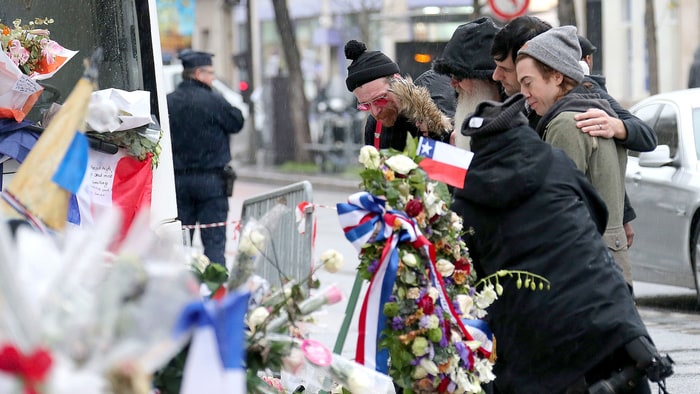 I’ve mostly been responding to Paris as a human. Within my spirit, that is, there has been a mixture of outrage, sadness, eye-rolling resignation, and (frankly) a half-willed ignoring–getting on with my life with a Friday dinner party and a weekend flag football tournament with my nine year old. But I am a follower of Jesus, and a pastor, and a theologian. Theology is the study of God. How might the best theology–theology that is rooted in Scripture, that is based in a Trinitarian understanding of the divine, that is for the church and for the world in which the church exists–respond to this crisis? I here posit a few suggestions.

In ancient Greek tragedy, actors playing the gods were lifted onto the stage by a large crane; their entrance often precipitated a quick resolution to the conflict. The “god from the machine” would bring about the denouement

that the audience was hoping for, but which up until that point was unimaginable. Deus ex machina now refers to any plot device in literature, drama, or cinema, in which the conflict is resolved in a surprising, convenient, and magical way. Think of the eagles at the end of The Lord of the Rings, snatching Sam and Frodo out of a certain fiery demise; or the Ewok attack on the Imperial troops in Return of the Jedi, whereupon Han escapes from the Storm Troopers, takes out the shield generator, allowing for the Death Star to be destroyed and, well, the universe saved. Deus ex machina.

But the God of the Christian tradition, the God of Jesus Christ, does not operate in this way, our desires for peace and the end of terrorism notwithstanding. There are no eagles, no Ewoks. For God has willed to save the world from within, becoming enfleshed in a particular man named Jesus from a town called Nazareth. God, the Playwright, has entered the drama of the human experience, but has not done so in a convenient, magical, plot-resolving way. God’s mode of being is intrinsic to creation, not extrinsic. There is no Deus ex machina, nor could there be, for evil, violence, injustice, and abuse are too deeply woven into the fabric of human existence. No “device” can alter the situation; there can be no snapping of the divine fingers. Along these lines, Karl Barth suggests that God’s saving work in Christ is…

…an event which takes place not only to the world but in the world, which not only touches the world from without but affects it from within to convert it to God… According to the witness of the New Testament, the world is not abandoned and left to its own devices. God takes it to Himself, entering into the sphere of it as the true God, causing His kingdom to come to earth as in heaven, becoming Himself truly ours, man, flesh, in order to overcome sin where it has its dominion, in the flesh, to take away in His own person the ensuing curse where it is operative, in the creaturely world, in the reality distinct from Himself (Church Dogmatics IV/1, 198).

God is transcendent and wholly distinct from the world that is his creation; but to save the world God had to enter into it, to live a human life, to step into the mire of violent history, to die an unjust, terror-ful death, to live through that death and then, only then, be raised. This is the exact, and necessary, opposite of Deus ex machina, as explained by theologian Colin Gunton:

[In God’s saving work there is] no suggestion of recreation by fiat, by the mere exercise of omnipotence, because the means of victory is the humble Son of God’s recapitulation of the human progress from birth, through death and beyond, in a conquest of the power of the demonic by faithfulness and truth. It is a victory that only God can win, but he wins it from within human reality (The Actuality of Atonement, 160-61).

Christian theology posits that the thread of violence within the world order is being unwound, that a narrative reversal has been enacted, that the beauty of the Triune God’s self-giving love has been woven into the warp and woof of the violence of this world. God has been lifted onto the stage, not through a machine-like crane, but through a cross-shaped death, willing to restore the beauty, peace, and order of creation from within.

When hundreds are dead in Paris (and Beirut, and…), the question foremost on our lips is “Where is God?” A different, and more theologically fruitful question, though, is to ask when is God? That is, what time is it in the narrative of God’s saving action in the world?

According to the New Testament, there is a significant gap between Jesus’ death and his resurrection from the dead. This gap is called Holy Saturday. After Jesus dies on the cross he is not immediately alive again. He is in the tomb, among the dead. Although we may spend the Saturday between Good Friday and Easter Sunday engaged in egg hunts, God is decidedly not engaged, for the enfleshed beauty of God, Jesus, lies in the tomb, his body decomposing.

The most profound recent exposition of Holy Saturday comes from Alan Lewis, who wrote his Between Cross and Resurrection: A Theology of Holy Saturday while dying from cancer. It is a difficult and significant theological treatise, a pronounced cry in the theological conversation, insisting that there is not only Good Friday and Easter Sunday, but that there is also Saturday. There is a pause, a hiatus, a day in between.

It is this day that we are still living. Ours is a Holy Saturday world. Although Jesus has been raised, the victory that Sunday has wrought is not yet complete. When is God? God, the God of Jesus Christ, the God of the risen Christ, is still with us in the rotting tomb. Lewis writes,

A creator who imperiously and coercively forbade or impeded such damage to creation, humanity, and deity would no longer be the God embodied and revealed in the weakness of the cross of Jesus Christ or in the self-imperiling of his tomb. Rather, in the Friday sacrifice of the Son to destruction and his Saturday surrender to hell and the demonic, all the unrighteousness and crookedness of human history, past and future, of every place and context, is embraced, compacted, and allowed for–given space to increase, to be and do its worst–and only thus transcended and redeemed. The hope which may sustain us in the aftermath of Auschwitz, Hiroshima, and Chernobyl is hope grounded in the harsh and harrowing knowledge that the only love able to triumph over those excrescences of wickedness and folly is the love that bows to their occurrence and makes itself their victim (Between Cross and Resurrection, 298).

This is a nuanced theology, and is susceptible to misinterpretation. Lewis’ argument does not mean that God is not sovereign, that God’s hands are tied, or that God is somehow at the mercy of the process, or lack thereof, of world history. God is sovereign, but has chosen to exercise the divine power and control in weakness, the weakness of a man who lived, and died, and who was dead. The empty tomb would be empty of power if it had not, for a moment, been filled with the dead Jesus. God’s victory would be impotent if God’s defeat, on Saturday, had not been so ostensibly sure. Our response to Paris should not and cannot be a vacuous optimism, but must be an abiding hope, the hope of resurrection in the midst of a Holy Saturday world.

Light in the Darkness

One of the more encouraging things that has been coming up on my streams the past few weeks is this quote from Martin Luther King, Jr.:

This thought is indeed timely, and is of course potent because of King’s own life and impact. King knew that God’s light, in Jesus, is “the light that shines in the darkness, and the darkness has not overcome it” (John 1.5)

. . . the true light will itself lead us into our darkness, unlike the false lights of religions and world views. For it is known that only as we become accustomed to the night, the deepening gloom, are we able to see the light that is specifically light for this darkness. Otherwise we are simply deluding ourselves with artificial light (Lighten Our Darkness: Toward an Indigenous Theology of the Cross, 203).

As a follower of Jesus, I must not think of the light of God as some kind of shield from evil, terror, and injustice. Jesus’ light is not a nightlight, plugged into the wall of my own personal world, guarding my dinner-party-and-flag-football-filled life against nightmares. It is a light for the darkness, a light to be shown, a light which gives hope but which is somehow wedded to the reality of despair. Again, Hall:

The mission of the people of ‘the Way’ today is to go with nations into the darkness. They do so not as superior guides; not as experts at maneuvering in shadowy places. Certainly not as the possessors of some inextinguishable light! But, let us say, as those who are at least not surprised by the darkness, as if it were something strange (I Peter 4:12) (Hall, 221).

Indeed, the above 1600 words feel like a stumbling in the dark. They feel insufficient and precarious, like a wick too deeply buried in wax, producing a flame which is anything but certain. And yet. I do have hope, because:

the Playwright is on the stage;

it may be Saturday, but Sunday has come before so it could come again;

there is not only darkness, there is also light.

And so I pray, and wait, and hope, and act, and trust. Thanks be to God.