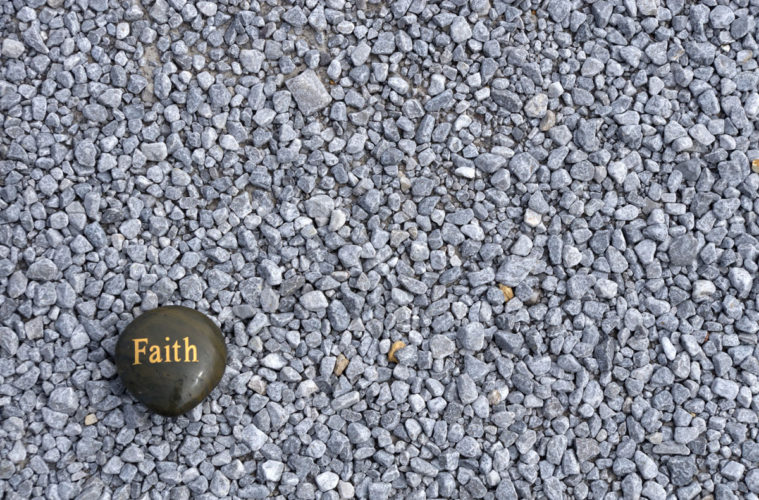 Show Us Your Faith!

“When he entered Capernaum again after some days, it was reported that he was at home.  So many people gathered together that there was no more room, not even in the doorway, and he was speaking the word to them. Then, they came to him bringing a paralytic, carried by four men. Since they were not able to bring him to Jesus because of the crowd, they removed the roof above where he was. And when they had broken through, they lowered the stretcher on which the paralytic was lying.  Seeing their faith, Jesus told the paralytic….” (Mark 2:1ff.)

The Lord can see our faith.

Faith at its simplest and most basic is confidence in Jesus. “You believe in God,” he said. “Believe also in me” (John 14:1).

Confidence in Jesus Christ affects everything we do. Take the story in Mark 2, for instance.

In a house crowded by listeners, curiosity-seekers, and heresy-hunters, people with actual faith in Jesus stood out prominently.

The four men of Capernaum did three acts that impressed our Lord with their faith:

1) They brought their friend to Jesus.

2) They physically brought their paralyzed friend to Jesus. This was a major achievement requiring planning and effort, so it was far more than simply inviting a buddy to meet them at church.

3) They went to great lengths to get the friend to Jesus. They had to convince the wife to allow them to do this, go to the trouble of moving the paralytic onto the stretcher, and then carrying him down the road to the house where our Lord was speaking. But they went beyond that, even to the point of carrying him onto the top of the flat house, then opening a hole in the roof. No one else ever did such a thing that we know of.

That’s what impressed the Lord.

He can always see the presence of faith. And, need we say, the absence of it.

“Why did you fear?” Jesus asked the frightened disciples in the midst of a stormy Galilee. “Where is your faith?” (Mark 4:40)

When the disciples spotted the Lord walking toward them through the morning fog, right across the waves of the Galilee, Simon Peter said, “Lord, bid me come to Thee.” He stepped out of the boat and took a few steps toward Jesus before a huge wave frightened him. As he began to sink, the Lord took hold of his hand, then said, “O you of little faith. Why did you doubt?”

Little faith? He alone stepped out of the boat and even attempted to walk on the waves. And hadn’t the Lord said, “If you have faith as a mustard seed, you can do miracles”? (Luke 17:6).

Who has seen your faith? Who has watched you struggling in the storms of life or under massive burdens and heard your song of faith and your testimony of love?

We have all seen faith, haven’t we?

I saw faith in my Grandmother Bessie Lowery McKeever. In the Depression, when someone came to the house taking up an offering for the preacher said to have no food in his house, Grandma gave the last 5 dollars to her name. And yet, she was a widow with ten children still at home. Later that day, the morning mail brought in a check to her for $15. She told me similar things happened again and again.

My friend Charlie cared for his wife Marilyn when the debilitating disease turned this lovely lady into a baby. She lay in a fetal position day after day for several years. Charlie, a college professor, would welcome a nurse just after breakfast and brief her about Marilyn’s situation. Then, he spent several hours teaching chemistry to his students, after which he returned home and dismissed the nurse. For the rest of the day and throughout the night, he cared for his beloved wife. This went on for years. I told him once that he was the very definition of faithfulness, that he gave new meaning to the vow “til death do us part.” (Charlie was a deacon in my church.  He was a man of great faith.)

Faith must act, otherwise it’s nothing more than pure sentiment.

Here are some texts on the subject: