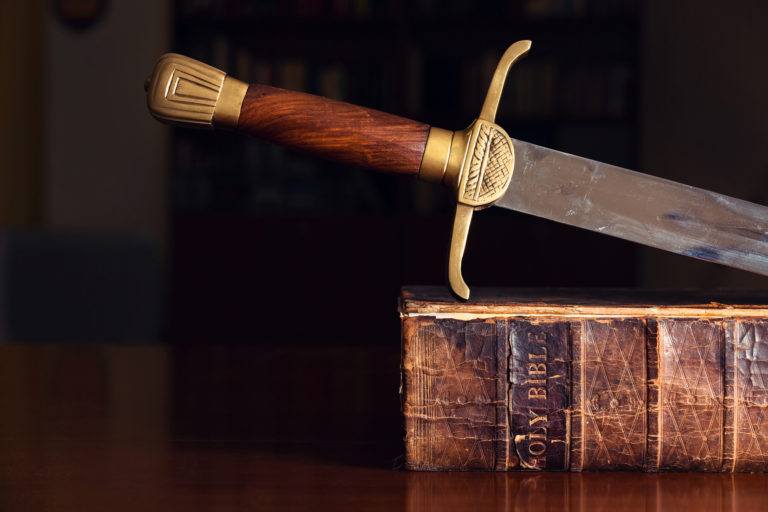 In the Name of Religion: Old Testament Atrocities, the Crusades, and the Inquisition

All history—secular and religious—is full of acts of cruelty, barbarity, and stupidity. The Bible, more particularly the Old Testament, records some of the most horrendous things in religious history. The Bible is very candid, even when the bad news refers to its heroes. On occasion, God himself is described as commanding entire towns and villages to be completely destroyed along with every living thing (1 Sam. 15:3). Most of the accounts, however, are only reported rather than approved.

To understand all these events in a fair and honest way, we need to discern what the actual facts were. First, it’s clear that a flood of great, perhaps even worldwide, proportions was planned and carried out by God (Gen. 6:1–7:24). Every living creature perished, except for a small remnant of people and animals. Later on, somewhat the same thing happened on a smaller and more local scale under the leadership of the wandering Hebrews. They were ordered by God to wipe out whole towns.

Obviously, reading some of these accounts horrifies most of us. We like to think that our religion brings only good, peaceful, and happy things. A violent God is almost instantly rejected by our generation and we wonder where the “You shall not kill” of the Ten Commandments fits in. (Actually, what God said was that we shouldn’t commit murder).

We’re highly offended by a God who brings his judgments to bear on human history. But let’s face it, we’re also highly offended by a God who does not. Don’t we constantly hear how impossible it is to believe in a loving and just God who allows so much evil to continue in the world? Whether God judges or refrains from judging, we still like to beat him with both ends of the same stick.

Once again, while not every question can receive an answer that perfectly satisfies everyone, some things can be clarified by discussing the issue more.

When it comes to some form of religious violence, the principal question to be addressed to any faith is: How is it connected to the faith? Sometimes it proceeds from the heart of the religion itself and the disturbing, even revolting, religious rites and rituals are part and parcel of the religion—an essential part of its worship and service. The observances are expressions of the adherent’s obedience and compliance to those faiths, rather than in defiance to it.

Clearly, the heart of the Old Testament faith doesn’t require violence to sustain it. It’s not an ongoing commandment of God as an expression of true worship. It appears that God temporarily used Israel as an instrument of his judgment upon the wickedness of towns and nations to provide a place for his people to settle and thrive. Without this, there would have been no opportunity for the Hebrews to obey God’s command to become a blessing and source of reliable information about God to all mankind. The radical evil and aggression of the surrounding peoples prevented the Hebrews from even beginning to fulfill their divine commission.

What is surprising is that on some occasions when we’d expect entire groups to be ruthlessly eliminated, they were spared and even blessed. One notable example is when an invading army, intent on committing great atrocities on God’s people, surrounds the city where the prophet Elisha is staying. Instead of being destroyed, however, they’re treated by God’s prophet to a great feast, then sent away happy and well fed (2 Ki. 6:8–23).

The policy of total destruction of some groups was apparently selective, temporary, and local. The goal was to clear away the evil in preparation for the people of Israel to inherit what God had promised to his servant Abraham (Gen. 12:1–3). They were permitted—even ordered—to continue fighting against the wicked nations long enough to complete the task.

God is clearly portrayed as taking no pleasure in the death of the wicked (Ez. 33:11). Rather, he was refusing to tolerate forever their chronic violations of his basic laws of justice and order. The warlike and violence-loving nations, each with long histories of unbelievable brutality, received in turn the just reward for their own choices. To take no action against them would have allowed chaos and disorder to spread into ever-widening circles and, ultimately, to reign over the earth once again. Also, just as God used his people to bring judgment upon the sins of the surrounding nations, so he used those nations as instruments of his judgment upon the Hebrews when they violated his law.

The Old Testament understanding of divine judgment was primarily the separation of chaos from order for the purpose of putting right-side up an upside-down world. It was carried out to maintain the goodness of God’s original creation. His judgments were for the welfare of his creatures. God’s superintendence over history in this way could be seen in much the same light as a referee’s overseeing the progress of a sports event. Would you want to participate in a soccer or football game without an official on the field?

None of the violence toward humans in the Old Testament had any necessary connection to the ongoing worship of God. God didn’t require the death of all those who preferred to avoid his presence and rule. He permitted nations to dwell for long periods of time in willful ignorance of, even open contempt for, his will and purposes for centuries thereafter and up to the present day.

As for the New Testament and the teaching of Jesus (the foundation of the Christian faith), we can’t find a single hint of instruction on the part of Jesus that violence and death are part of his continuing will for the church, or are in any way intrinsic to the worship of God. What things people have chosen to do in the name of Jesus Christ, whether foolish Crusades to acquire land or cruel Inquisitions to enforce institutional dogmas, have been entirely the dark decisions of those who apparently hadn’t the slightest idea what Jesus actually taught.

Jesus spoke openly of those who would call him “Lord,” but who refused to do or be what he really wanted and taught (Lk. 7:21, 23). He said that the wheat and the weeds, the sheep and the goats, would dwell intermixed until he himself would come in the Final Judgment and separate them forever.

To summarize, the debauchery in the name of religion, regarded in each case as a form of obedience of a particular faith, is far from anything we are taught in the Bible. In fact, what is prescribed (advocated) by the world’s religions is proscribed (forbidden) by the teaching of Jesus. Any and all forms of depravity, cruelty, self-exaltation, and self-serving manipulation of others done in the name of Jesus are always in defiance of his revealed will.