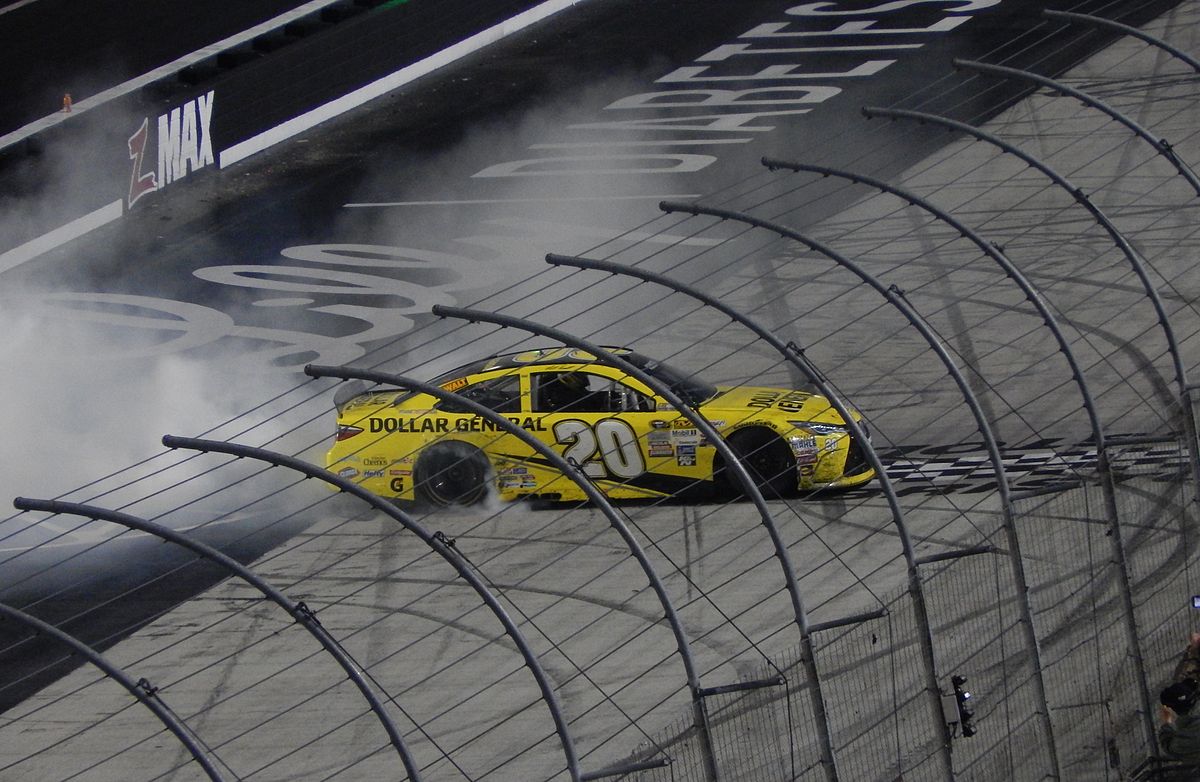 NASCAR, Inconsistency, and the Human Condition

This past Sunday NASCAR visited the “Paperclip” in Martinsville, Virgina. Martinsville is an historic one mile track that is know for its amazing comebacks and ruthless bumping and banging for 500 miles. This past Sunday was no different as eight drivers entered into the Eliminator round of NASCAR’s fairly new playoff system. The Eliminator round has eight eligible drivers who are fighting for points, and victories, leading up to a final Championship race in Miami, Florida.

In the eliminator round, only four of the eight remaining eligible drivers advance to compete for the NASCAR Sprint Cup Championship. There are two ways to get to Miami. Over the course of three races one of the eight eligible drivers must either be in the top 4 in points, or get a win. A win at Martinsville means guaranteed eligibility in the final race for the Championship. Spoiler Alert: 4-time champion Jeff Gordon won the race. As historic as that was, it’s not what anybody is talking about.

What everybody is talking about is something that happened with less than 50 laps to go. As he has for the last threecr consecutive races, Joey Logano driver of the Penske #22 Pennzoil Ford, was dominating the field and looked to be a lock for the win and to advance to the Championship race in Miami, Florida. Logano was mere laps from tying a 2007 feat accomplished by 6-time Champion Jimmie Johnson: Winning four consecutive races in NASCAR’s Playoff Chase system.

Unfortunately for Joey, his dominance would be cut short by a move he called “cowardly” as former Champion, and NASCAR’s resident robot, Matt Kennseth decided to undercut him going into a turn and slammed him into the wall (Watch Here). Kenseth, laps prior, had been involved in a wreck with Joey’s teammate Brad Keselowski who many believed was blocking for Joey to keep both drivers in 1st and 2nd places. Both Kenseth and Keselowski were heavily damaged and went a couple laps down as a result.

To add insult to injury, Kenseth was not competing for the championship. He had been eliminated in the previous round and was no longer eligible for the Championship. His “cowardly” move snatched a win from Logano, and thrust him from the top of the NASCAR Eliminator Round standings all the way to the bottom.

Why would a respectable former champion sink to these levels of retaliation? It all goes back to a couple weeks prior as Logano and Kenseth were battling for a win in Kansas. Matt Kenseth was in the lead with Joey Logano closing fast. Logano had already won the first race of that playoff round, and had already punched his ticket to the Elminator Round. Kenseth, however, was desperate for a win so he could get to the Eliminator Round.

After being “blocked” by Kenseth for a number of laps, Logano decided to put the bumper to Kenseth and spun him out (Watch Here). Logano went on to win that race as well as the following race. Kenseth’s Championship run, however, was cut short as he failed to advance to the Elimnator round due in large part to Logano’s unnecessarily risky (cowardly?) move. 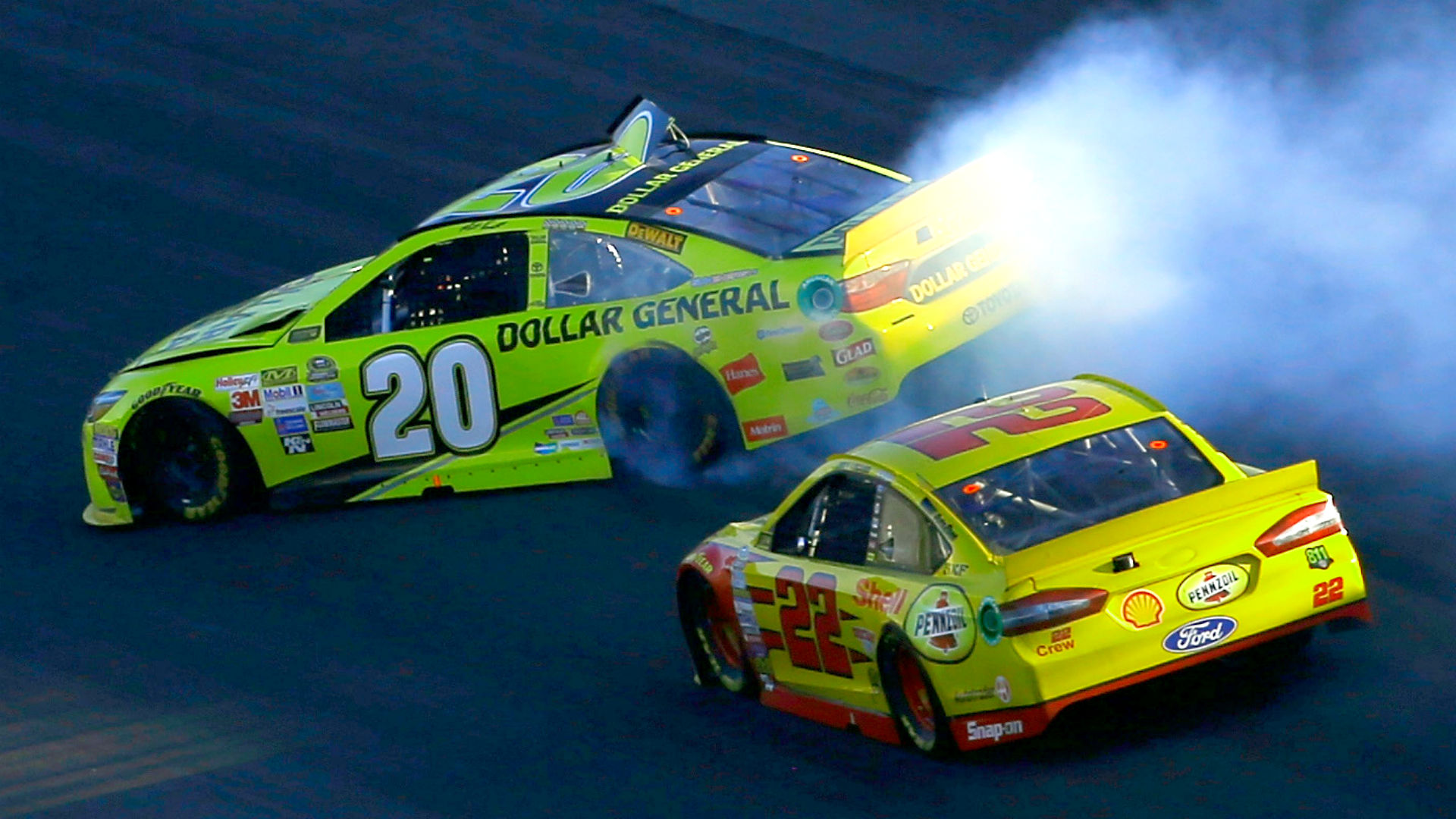 On Tuesday, NASCAR is expected to make a ruling on these actions. Nothing like this has ever happened at the Sprint Cup Level. Certainly comparable things have occurred but with NASCAR’s new playoff system accenting wins, Matt Kenseth’s move directly impacted the championship picture. It’s sort of like the Raiders showing up to a Superbowl between the Seahawks and Patriots and running onto the field to tackle players. It would make no sense, it would screw up the Superbowl, and would definitely require some sort of action by the NFL.

While nothing of this magnitude has ever happened at the Sprint Cup level, something like this HAS happened in the Truck Series. Kyle Busch alluded to this in his press conference when he said “NASCAR better be consistent on this.” Kyle was referring to an incident he was involved with a few years ago when he decided to wreck Truck Series Championship Contender Ron Hornaday under caution after Hornaday raced him hard into the wall on the previous lap (Watch Here). Kyle Busch was not in championship contention in that race. NASCAR’s sanctioning body parked Kyle for the rest of the weekend not allowing him to race in the Cup race. He was also later fined $50,000 and put on probation for the duration of the season.

The question that has people buzzing today is this: Will NASCAR have the intestinal fortitude to park former NASCAR champion Matt Kenseth for his actions? Was Kyle Busch correct when he said in his press conference that, “NASCAR determines the penalties based on whose name is above the door?” There is no question that Kenseth has performed an action that was “detrimental to stock car racing.” Most commentators agree that Kenseth took it to a whole different level as a driver who was multiple laps down and clearly not in contention for the race.

NASCAR has a track record of being wildly inconsistent with their penalties. At times it seems like the only thing that NASCAR is consistent with is being inconsistent when applying penalties to drivers who violate the rules. A sentiment Kyle Busch explicitly expressed in his press conference. (Watch Here) Will NASCAR suspend Kenseth for a race or two? Will they put him on probation and penalize him both driver and owner points? We’ll see later today. But all this talk of inconsistency has me thinking about something else altogether.

The Human Condition – We’re All Inconsistent

What really stood out to me, as I watched the fledgling car of Matt Kenseth ram into the most dominant car on the track, was the crowd’s reaction. Without hesitation the stands could audibly be heard erupting into applause and cheers of joy. If you watch the video again you will see exuberant fans pumping their fists and rising to their feet as if their favorite drive had just won the race. But that’s not what they are cheering about. They were cheering because a dominant young driver had, in their view, gotten his comeuppance!

If you’re not a NASCAR fan this next point may be lost on you. In any case, imagine if Dale Earnhardt Jr. had been racing for the win, and Joey Logano had done the same to him! I guarantee you that NASCAR fans on the whole would have jeered, taunted, and maybe would have even rioted. Jeff Gordon simply won a race under caution that Dale Jr could have won many years ago, and he was greeted with a barrage of beer and soda cans on his victory lap (Watch Here). Imagine if the roles were switched in this situation!

We are an inconsistent bunch. The Bible tells us in Jeremiah 17:9 that, “The heart is deceitful above all things, And desperately wicked; Who can know it?” The Bible describes the condition of man as one that is both deceitful and wicked. We lie, at times, even to ourselves. This internal wickedness and proclivity to deception leads to all kinds of inconsistencies in our judgment. When we watch the sanctioning body of NASCAR apply different penalties to two drivers who violated practically the same rules we see this inconsistency at work. When we watch fans dump cans on one driver just for winning, and salute another for wrecking a potential winner, we see this same arbitrary inconsistency.

The condition of man, as such, demonstrates the inadequacy of mankind, whether individually, or collectively, to come up with a system of morality that is both absolute, and consistent. We see this on a minor level in NASCAR, and on a massive scale throughout the world and throughout history. This inability to adequately comprise a system of morality by mankind ought to lead us to a source that is not so prone to misjudgment, deception, and wickedness. In the case of the atheist, they fail to do this even though the evidence of this inability, even without Scripture, is so readily available it’s impossible to overstate.

In a recent episode of Apologia Radio they played some clips of a recent debate they had with some atheists at the Bahnsen conference. This debate perfectly demonstrated the inconsistency and inability of men to properly account for any adequate system of morality without appealing to something absolute and outside of themselves. Though they insisted they could do it, when pressed for a reason why their morality should be heeded, or what foundation upon it was built, they ultimately came up with nothing. It was the same problem David Silverman, president of the American Atheists, faced when he debated James White. It’s the same dilemma that Christopher Hitchens could not weasel his way out of when he faced off against Doug Wilson.

Truthfully, it’s the problem we all have until we come to a saving knowledge of the Lord Jesus Christ. When we come to faith in Jesus Christ the first thing we do is we stop trusting in our own abilities. Not only in our own works to save us, but our own judgments to judge us. Have you ever noticed how self-justifying unbelievers can be? The world has definitely done them wrong, but they can do no wrong. It may be government’s fault, the church’s fault, their parent’s fault, or even their neighbor’s fault but it certainly isn’t their fault.

In Christ, the inconsistency comes to an end because in Christ we come face to face with the only eternal, objective, absolute standard of morality. When we come to Christ we accept His absolute judgments about us over our own. We acknowledge that while we may have been perfect according to our own standards, we have failed miserably according to his. Further, we also receive his perfect imputed righteousness by ceasing to trust in ourselves for justification, and relying solely on him who alone is both just and justifier (cf Romans 3:26). We who once judged inconsistently now can turn the judgment over to the one who judges perfectly, absolutely, certainly, and unequivocally.

I don’t know what Christ’s judgment would be on Matt Kenseth and Joey Logano. I suspect that if Jesus Christ was at the helm of NASCAR’s sanctioning body they both would be receiving some sort of penalty for both of their actions. As it is, NASCAR’s sanctioning body will continue to do what we as sports fans do every single week whether we’re watching football, basketball, racing, hockey or soccer: they’ll act consistently with their nature by acting inconsistently.

We will act little different as we hoot and holler and apply our standard of law to each call, each play, and each controversy. We will act inconsistently and arbitrarily and in so doing we’ll continue to prove that we are not suited to make moral judgments in society. God alone has given us a just law by which to live, insofar as we heed that we will follow true justice. Insofar as we abandoned it, we do so inconsistently and arbitrarily, lacking and true foundation upon which to stand or fall.

Photo by Matt Kenseth burns down the house at Thunder Valley” by Nascarking – Own work. Licensed under CC BY-SA 4.0 via Commons.”> via Wikipedia