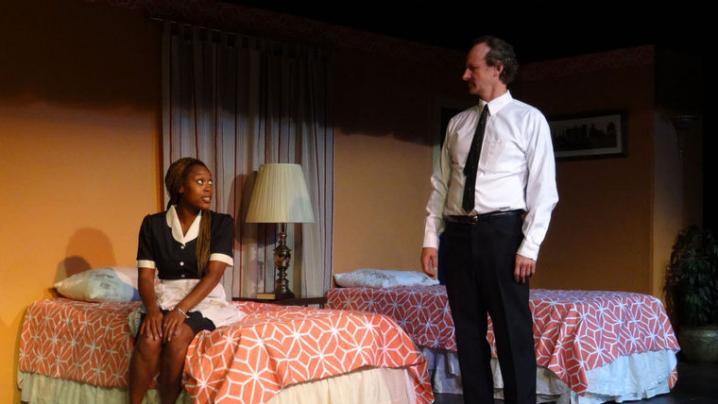 Some things have become SO ingrained into a culture’s worldview that anything that conflicts with that worldview causes turmoil and conflict. Such is the case with famous historical figures. Certain people become larger than life. When a person achieves the status of cultural icon, it’s USUALLY a pretty good idea not to mess with that person’s image.

Recently a Kent State University director decided to cast a white man as Martin Luther King Jr in The Mountaintop (a fictionalized account of King’s last night before his assassination).

You heard correctly. Well, TECHNICALLY he cast a white man AND a black man who would both fill the role for different performances. Why on earth would anyone mess with MLK? The director commented:

I wanted to see how the words rang differently or indeed the same, coming from two different actors, with two different racial backgrounds.

While the playwright is furious over the issue and is disallowing anyone to cast a non-black in the role, the issue is an interesting one to discuss. I had a conversation with some guys the other week about Jesus and ethnicity. They pointed out that, being a Middle Eastern Jew, there was a good chance that Jesus looked nothing like the anglo, Pantene-hair Jesus we so often see in art and cinema. No matter what Fox News says, Jesus wasn’t a white man.

Racial bias is normal. It is a normal human trait to imagine stories from our own perspectives. When we read our imaginations usually make the characters look like us. Even when the author is clear about a character’s description we will often overlook that description in our heads.

There were many fans of The Hunger Games who were upset when the character Rue was cast as a little black girl. They failed to recognize the description the author provided and filled in their own gaps from their own perspectives…

The story of Jesus is no different. We don’t have any photos of the man so we are left to use our imaginations to see him. Left to ourselves, we fill in the blank spots from our own experiences, culture, and background.

Megyn Kelly wasn’t being racist. Ignorant, sure, but not racist (and honestly, it’s hard not to see Jesus as white when the majority of sacred art we’re exposed to is European…).

One of my most prized possessions is a book called The Life of Jesus (1978, Buechner and Boltin). I don’t think it’s in print any more, but you can get it used on Amazon.

It’s the story of Jesus combined with sacred art from around the world. Let me show you some famous art of Jesus…

We all tend to fashion the Bible from our own background. Is it wrong to see Jesus as a white guy? As Japanese? As African? Historically, sure—he was a Middle Eastern Jew. But the whole point of the Incarnation is that Christ is WITH us. God is not far away and removed—he is one of us. So the God who left heaven to be like me might look like me. What other god ever bothered to become like us?

The mystery and magnificence of YAHWEH is the Incarnation. His name is Emmanuel, which means: God with us.

Ms. Kelly might want to apologize for her cultural bias and ignorance but I don’t fault her for seeing Jesus from her background and heritage. I don’t really expect my blog will ever cross her path, but if you do know her send her the link, okay?

Can Martin Luther King Jr. be played by a white guy? Sure, but it’s probably not a great idea to mess with cultural icons. How about Jesus? Can we take ownership of him? Take some time to reflect on the idea that God cares enough for us to become like us. To feel like us. To suffer like us. To die like us.

Photo by Itzel Leon for KentWired.com