What Things are Chiefly Contained in the Holy Scriptures?

Question 6 – What things are chiefly contained in the Holy Scriptures?

“Follow the pattern of the sound words that you have heard from me, in the faith and love that are in Christ Jesus.” – 2Ti 1:13 ESV

Hold fast the form of sound words, By “words” are meant, not mere words, but doctrines; for the servants of the Lord should not strive about words, to no profit, or be too tenacious of them. Indeed when words have long obtained, and have been very useful to convey just ideas of truth to the mind, they are not to be easily parted with, though they are not syllabically expressed in Scripture, unless other and better words can be substituted in their room; and especially they are to be tenaciously abode by, when the apparent design by dropping or changing them is to set aside the truths signified by them; such as trinity, unity, essence, person, imputed righteousness, satisfaction, &c. But here words design doctrines, the words of faith and good doctrine, the wholesome words of our Lord Jesus Christ; and which are said to be “sound”, in opposition to the words and doctrines of false teachers, which are corrupt and unsound, and are pernicious, and eat as do a canker; and because they are so in themselves; they are not only sweet and pleasant, but salutary and nourishing; they are milk for babes, and meat for strong men; they are food for faith, and nourish up to eternal life.

The “form” of them either intends the manner of teaching them, which should be it, apt and acceptable words, plain and easy to be understood, and not with the enticing words of men’s wisdom; or a brief summary, a compendium of Gospel truth. It was usual with both Jews and Christians to reduce the principles of their religion into a narrow compass, into a short form or breviary. The Jew had his “form of knowledge, and of the truth in the law”, Rom 2:20, which was a rule to himself, and an instruction to others; and such a form, or Jewish creed, may be seen in Heb 6:1. The Apostle Paul gives a summary of the Gospel, which he preached, and which he reduces to two heads; repentance towards God, and faith towards our Lord Jesus Christ, Acts 20:20 and an excellent compendium and abridgment of the Gospel, and a glorious form of sound words, we have in Rom 8:29 and such an one Timothy had heard and received from the apostle, as a “pattern” for him hereafter to preach by, as this word signifies; and as it is rendered in 1Tim 1:16.

There seems to be an allusion to painters, who first make their outlines, and take a rough draught before they lay on their colours and beautiful strokes; and which rough draught and first lines are the rule and pattern of their after work; and which they never exceed, but keep within the compass of: so there is a set of Gospel truths, which may be called the analogy or proportion of faith, which are a rule and pattern, as for hearers to judge by, so for ministers to preach according to, 1Tim 6:3 And such a form or pattern was the apostle’s doctrine to Timothy, and which he full well knew: and this form includes the doctrines concerning the trinity of persons in the Godhead, Father, Son, and Spirit, and the proper deity and distinct personality of each of them; concerning the everlasting love of the three Persons to the elect, the covenant of grace, and the transactions in it relating to them; their personal and eternal election in Christ, and his suretyship engagements for them; the state and condition of men by the fall, and through, sin, as that Adam’s sin is imputed to all his posterity, and a corrupt nature propagated from him, and that man is altogether impure, and entirely impotent all that is spiritually good; as also such doctrines as concern particular redemption by Christ, satisfaction for sin by his sacrifice, free and full pardon by his blood, and justification by his imputed righteousness: regeneration and sanctification by the powerful and efficacious grace of the Spirit of God; and the final perseverance of the saints to eternal glory, as the free gift of God.

And this is a form never to departed from, but to be held fast, as Timothy is exhorted; which supposes that he had it, as he had, not only in his head, but in his heart; and that there was danger of dropping it through the temptations that surrounded him, the reproach and persecution the Gospel lay under, and through the sleight of false teachers, who lay in wait to deceive, and to take every opportunity of wringing it out of his hands; and therefore it became him, as he had it, not only to hold it forth, and publish it, but to hold it fast, in opposition to any wavering about it, or cowardice in it, or departure from it in any degree. And the argument to hold it fast follows,

which thou hast heard of me; both in private conversation, and in the public ministry of the word; and which the apostle had not from men, but by the revelation of Christ; and therefore was to be depended upon, and to be abode by, or held fast, in the manner next directed to:

in faith and love which is in Christ Jesus; in the exercise of faith, and from a principle of love; which two graces always go together, and have Christ, as here, for their object: though this clause, may be connected with the word “heard”, and the sense be, either that Timothy had heard Paul preach these sound doctrines with great faith and faithfulness, and with much fervency and affection to Christ, and the souls of men; or Timothy had heard them himself, and embraced and mixed them with faith, and received them in love: or it may be read in connection with “the form of sound words”; the sum of which is faith in Christ, and love to him; the Gospel is the doctrine of faith; and it puts men on discharging their duty from love to Christ. [Gill]

[Editor’s Note: 2 Timothy 3:15,16 are also listed as proofs for this question. Gill’s full commentary on those verses are listed in Question 3c and Question 4.]

Answer – The Holy Scriptures chiefly contain what man ought to believe concerning God, and what duty God requireth of man. 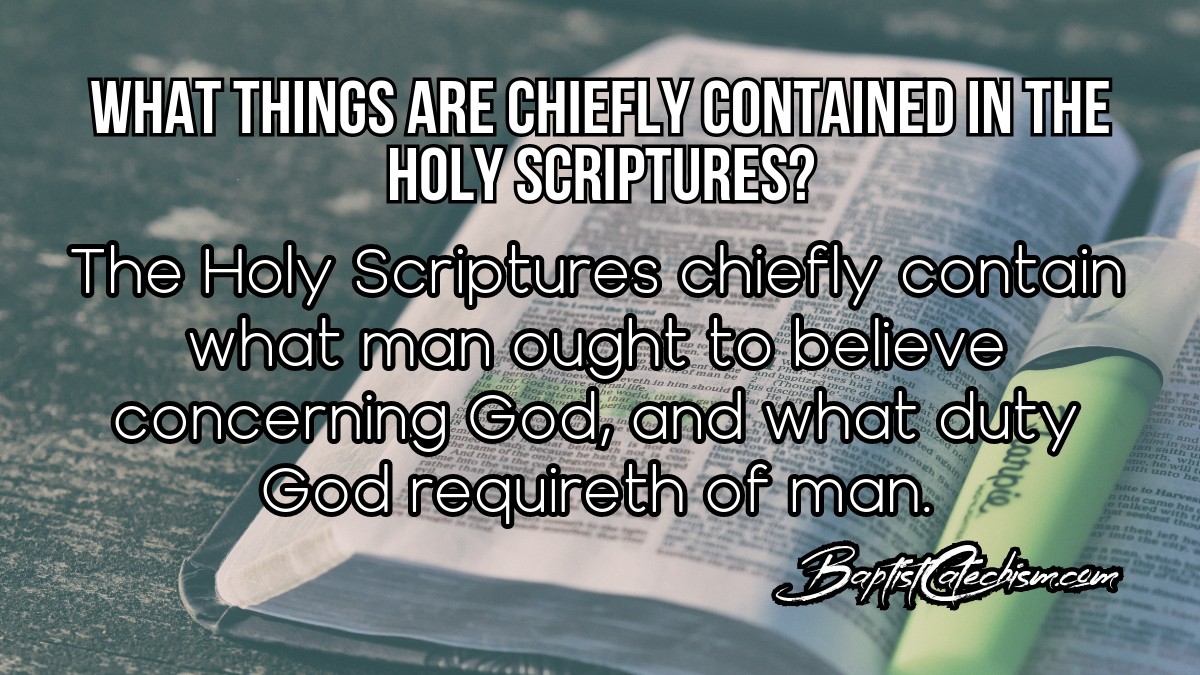 Photo by Josh Applegate on Unsplash

On the Ground Looking Up: A Call to Love

If We Ban the Wrappers, No One Will Ever Touch the Straws | TMBH Luke #22

For Sinners: Reclaiming the Offensive and Beautiful Truth