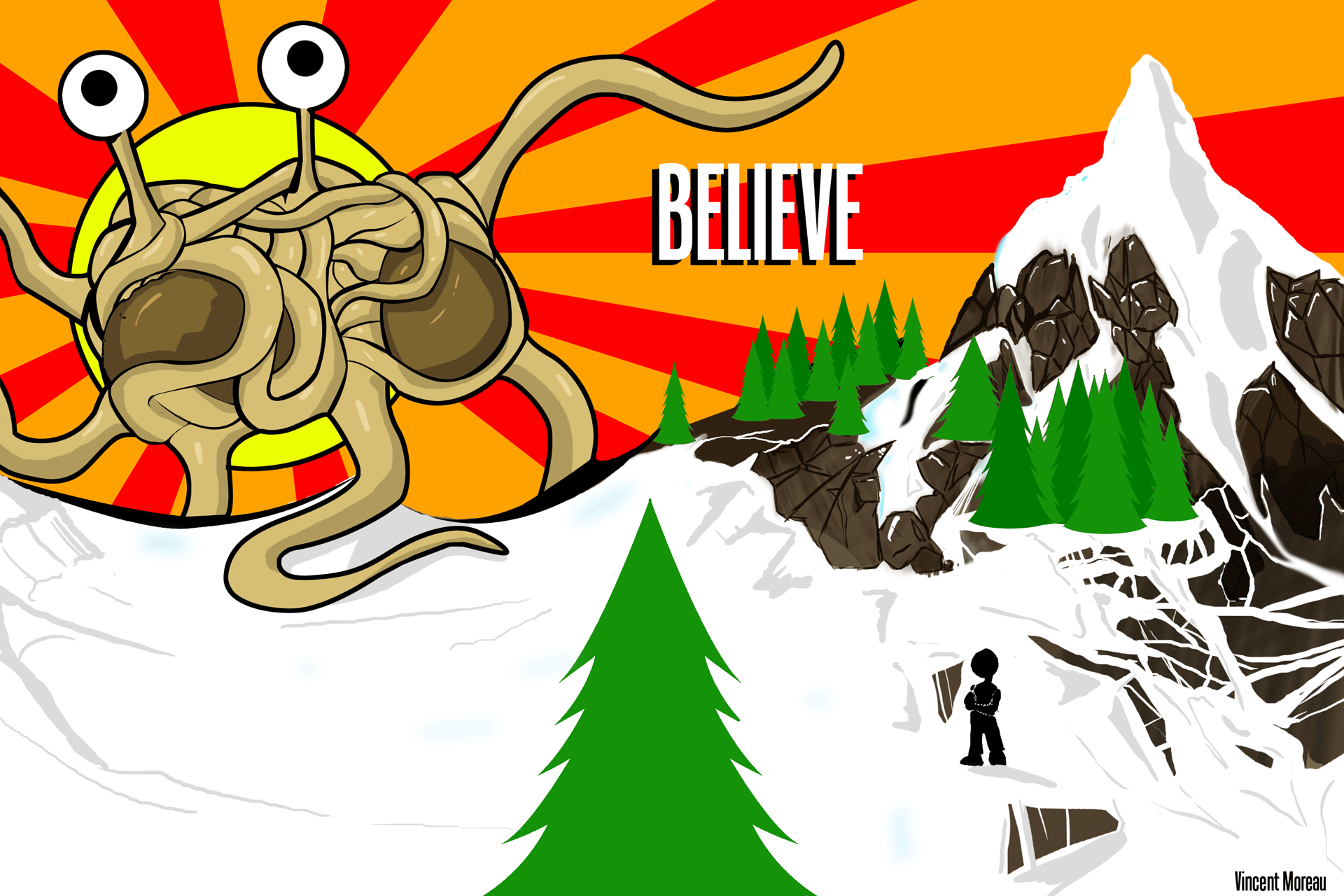 If you’ve spent any time on the internet during the last 10 years, you may have noticed that some people (those who go by the name “new-atheists”), have been talking about the Flying Spaghetti Monster (FSM). They believe that the FSM is a legitimate analogy to God, similar to Russell’s Teapot or “the invisible pink unicorn.”

The advocates of the FSM (they call themselves pastafarians) usually attempt to show that the FSM and God are on equal epistemic grounds because they both have no evidence, or they’ll say that the evidence used to show that God exists could just as easily affirm the existence of the Flying Spaghetti Monster.

Notice that this silly analogy is nothing more than a dismissal of the evidence for God’s existence. But that’s actually the least heinous of their intellectual crimes. Even if theism is false and God does not exist, the FSM would be a really bad parody. According to William Lane Craig, “The real lesson to be learned from the case of the Flying Spaghetti Monster is that it shows how completely out of touch our popular culture is with the great tradition of natural theology.”

You may be thinking…come on, Elijiah. No one actually uses the Flying Spaghetti Monster as a REAL argument! And in response to that, I will point you to prominent atheist author and speaker Richard Dawkins, in his post at the Huffington Post:

We cannot, of course, disprove God, just as we can’t disprove Thor, fairies, leprechauns and the Flying Spaghetti Monster. But, like those other fantasies that we can’t disprove, we can say that God is very very improbable.

Natural theology is a branch of philosophy that uses observations of the natural world and reason to discern the existence and attributes of God. There are a wide variety of arguments that would fall under the term natural theology, and for the sake of illustration, I will use an argument known as the Kalam Cosmological Argument (click here for an awesome visual demonstration of the Kalam from Reasonable Faith).

The argument can be easily stated in this way:

Once we’ve determined that the universe has a cause, we can discern the necessary attributes of this cause.

Because this cause created the universe, it must be…

Given these necessary attributes of the universe’s cause, is the spaghetti monster a reasonable inference?

Of course not, you’re silly! (I know that wasn’t a serious question.)

Spaghetti is a contingent entity, bound my the time, space, and matter within the universe. So lets toss points 1, 2, 3, & 4 into the flying spaghetti garbage. Does spaghetti qualify as a possible metaphysically necessary entity? Given that it is contingent upon the existence of the universe, no. There goes #7!

Could the monster be a really powerful monster? Sure. You can have #5.

Could the monster be personal? Sure! You can have #6, too.

There is absolutely no way you could be the cause of the universe!

I can already predict the response from the pastafarian.

“Yes but Elijiah…this Flying Spaghetti Monster has all of the attributes you’ve discerned from the Kalam!”

At this point, the pastafarian granted the argument’s soundness & validity, is now quibbling about what name to call God.

I call him God, they call him the FSM. It would be a strange form of atheism that believes in a timeless, spaceless, immaterial, supernatural, powerful, metaphysically necessary entity. And it would be even more strange for this same atheist to refer to this entity as…spaghetti.

Feel free to leave a comment or question below!

PS: If you’re interested in this topic of natural theology, I strongly suggest you get your hands on this book: The Blackwell Companion to Natural Theology. It is one of my favorite books on the topic.

Photo by Vincent Moreau via Venganza